We’re now into our third edition of the Spartan Scorecard Series, and this time we’re going back to 2001 to reminisce the only other century by a Spartan in a grand final fixture.

In this third chapter of The Spartan Scorecard Series, we celebrate a sensational innings from 2001 – nearly a quarter of a century ago – by our own Steven Quartermaine against East Fremantle.

As we detailed in the first Spartan Scorecard Series edition, the Leeming Spartan Cricket Club has only ever celebrated one century in a two-day grand final match – with Peter Phillips’ 105 against Hilton in 1999.

There has only ever been one other century in grand final by a Spartan, this time in a one-day grand final, as Steven amassed a terrific unbeaten 110 to rescue the Spartan innings and take us to a commanding total in the forty-over match.

This naturally serves as our highest score in a Grand Final in any grade or match type (two-day or one-day), and as you’ll see below it really could not have come at a better time given we were in trouble at 4/34 and the infamous Spartan Shuffle was on the cards.

Steven Quartermaine amassed the highest score by a Spartan in a grand final in 2001 when he scored 110 not out against East Fremantle in the 3A Grade Final.

The match itself was played on the 11th of February 2001 and saw the Leeming Spartan Cricket Club taking on East Fremantle at their home ground of Preston Point Oval in what was the 3A Grade Grand Final.

For those wondering, in the “numbered competitions”, them being First Grade, Second Grade, Third Grade and so on, the grades are designated as two-day competitions taking place over consecutive Saturdays in summer months. This is somewhat confusing however given that the season is actually made up of roughly half two-day (75-over) matches and the other half one-day (40-over) matches. The one-day matches also form their own competition with a premiership decided earlier in the season, usually February, and it is referred to as the mid-year premiership. The two-day competition then has its grand final following in March on a Saturday and Sunday game.

So essentially, in these grades there are actually two premierships up for grabs each season. To make things even more confusing for the newcomers is that the points earned from one-day fixtures also go to the two-day competition but not the other way around.

Hence this is why Steve’s astonishing performance is designated as a one-day grand final century, and is the only one of its kind at the Leeming Spartan Cricket Club.

The performance really was a fantastic individual effort at the most critical of times, and certainly deserves its place in Spartan folklore.

The match itself actually saw us on the back foot early on and certainly in trouble at 4/34 after East Fremantle had won the toss and sent us in to bat.

Taking place in the 3A Grade’s one-day grand final in February 2001, the game was being played (from our point of view anyway) in enemy territory at Preston Point against East Fremantle.

Despite the early troubles, it was a partnership for the ages between Steven Quartermaine and Andrew Walker of 111 for the fifth wicket that truly put us back on top, and when Walks was dismissed for a fine score of 50, the Spartans had moved to 5/145.

The unrivalled star of the show was Quartermaine however, who had come in at 3 for 8 and was 20 not out by the fall of the fourth wicket at 34. When Walker was dismissed following that brilliant partnership, he was on 78, before cracking several fours and singles to bring up his century in the later overs of the match.

It would also be a missed opportunity to credit the excellent standards shown from the scorers during this match, with the counting of all deliveries (including dot balls), and the colour coding for boundaries really making this even more of a joy to read! Check out the scorecard below. 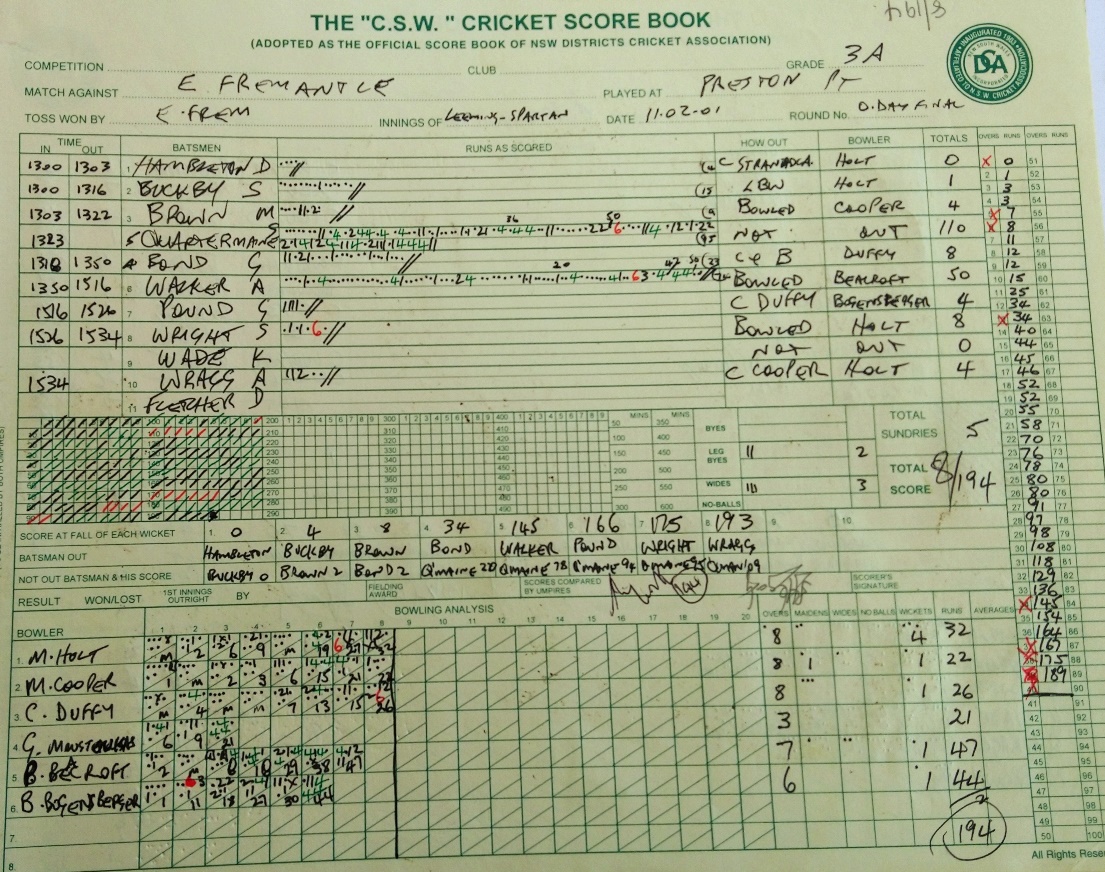 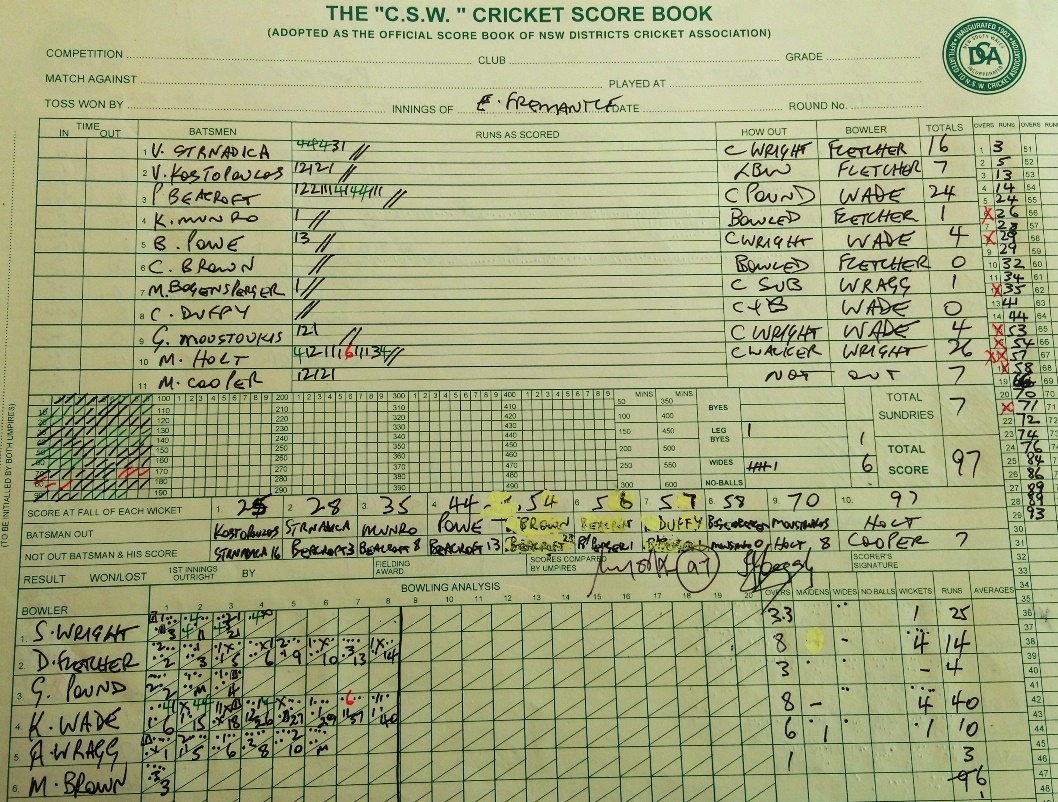 Despite the early troubles, the partnership between Quartermaine and Walker truly stole the show, and the two Spartans defied the East Fremantle bowlers at the start of their partnership before flourishing throughout. Walker’s innings was of considerable note also, and as you will see early on he had to dig in and play off some very good deliveries at the start, before escalating very well in the latter stages.

Quartermaine meanwhile was in fine touch from the start, crashing boundaries seemingly at will off any delivery, and this ensured that despite the four wickets already lost, the run rate never stalled.

After Walker was finally dismissed and the score 5/145 (and only six overs to go), it was Quartermaine who finished out the innings in style, ramping up his scoring rate and then some to get us to our final total of 194.

Only 16 runs came from the batsmen who followed, and despite this we added almost an extra fifty runs.

Steve was 95 not out when the seventh wicket fell on 175, and he then brought up his century with a single. He then clobbered his last three deliveries for boundaries, to race to an unbeaten 110 in the Grand Final!

Batting with the tail, Steve took it on all by himself, smashing boundaries and reaching his deserved century in the penultimate over. With the lower order, they added another fifty runs in just six overs.

By the end of the Spartan innings, we had made a highly competitive 8/194 from our forty overs, and this was largely on the backs of these two Spartans as no other player passed ten for United States With only five sundries to boot, the score of 194 was a truly superb effort on difficult batting conditions against a good opposition attack.

The follow-up with the ball was also terrific, as we routed East Fremantle for just 97 to take what can be looked upon as a comfortable victory despite the dire straits we were in early in our batting innings.

Four wickets each to Darrin Fletcher and Kevin Wade ensured that the Spartans would win the match. East Fremantle started strongly to reach 25 without loss, but then lost 4 for 19 to be reeling at 4/44. At 8/58 the match was in its final stages and despite an entertaining 26 from the number 10, it was only a matter of time before the final wickets were claimed and the Leeming Spartan Cricket Club could celebrate victory.

It has to be said that the brilliant bowling performance was not enough to overshadow the events from earlier in the match though, with Steven Quartermaine’s century – an unbeaten 110 – rescuing the innings from 4/34 and seeing us to 194.

Congratulations to Steve and the 2000/01 premiership team on the fantastic victory. This side celebrates twenty years since that premiership in this coming season and it still ranks as one of the most memorable premierships in Spartan history! 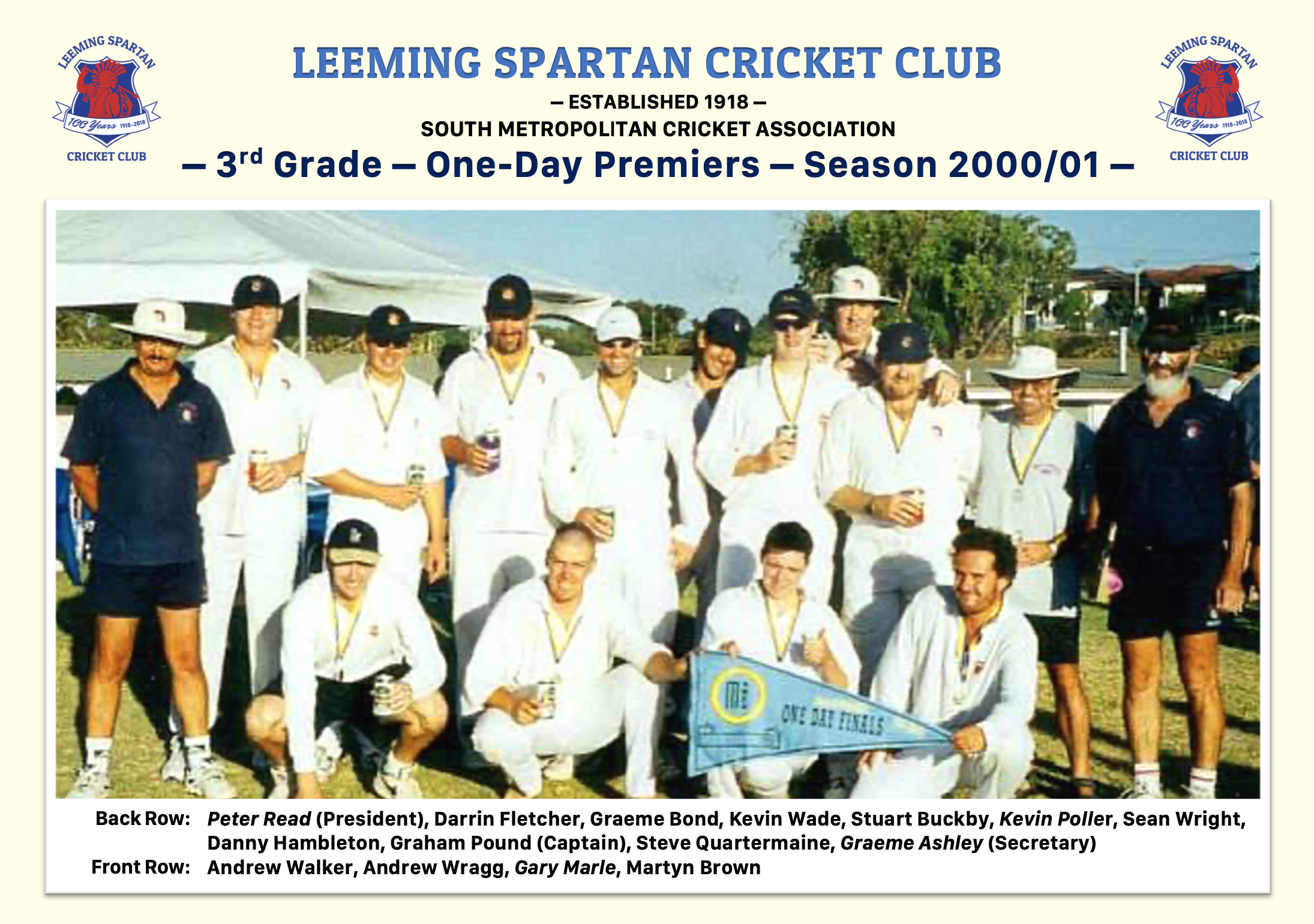 The 3A Grade Premiership Photo

This was our third entry in our The Spartan Scorecards Series, and with plenty of matches to list, we hope to bring you a new entry at least every week this off-season! Be sure to stay tuned, and consider subscribing to our Email Newsletter if you haven’t done so already – that way you’ll never miss an entry!

We’ve also revived the From The Spartan Archives series that was popular many years ago! Be sure to read the latest entry – number five – by clicking here. It’s the perfect company during this isolation period! The sixth edition will be announced shortly and as a sneak peek we’re moving away from the on-field history to look at something completely different from our digital archives.