The hottest thing this winter.

The Leeming Spartan WinterT20 series is our most popular off-season fundraiser, allowing anyone and everyone to come down and have a game of cricket during the winter months.

A casual yet competitive day of cricket in the warm winter sun is the perfect off-season catchup for current and prospective players. With the bar and BBQ running all day long, our WinterT20 Series also sees us compete under lights at our home ground John Connell Reserve!

It may sound like a strange idea given cricket is a summer sport, but Perth's winter weather is amongst the best in the world (touch wood!) meaning that matches typically go ahead unaffected. Read on below to learn all about our hugely popular WinterT20 Series! 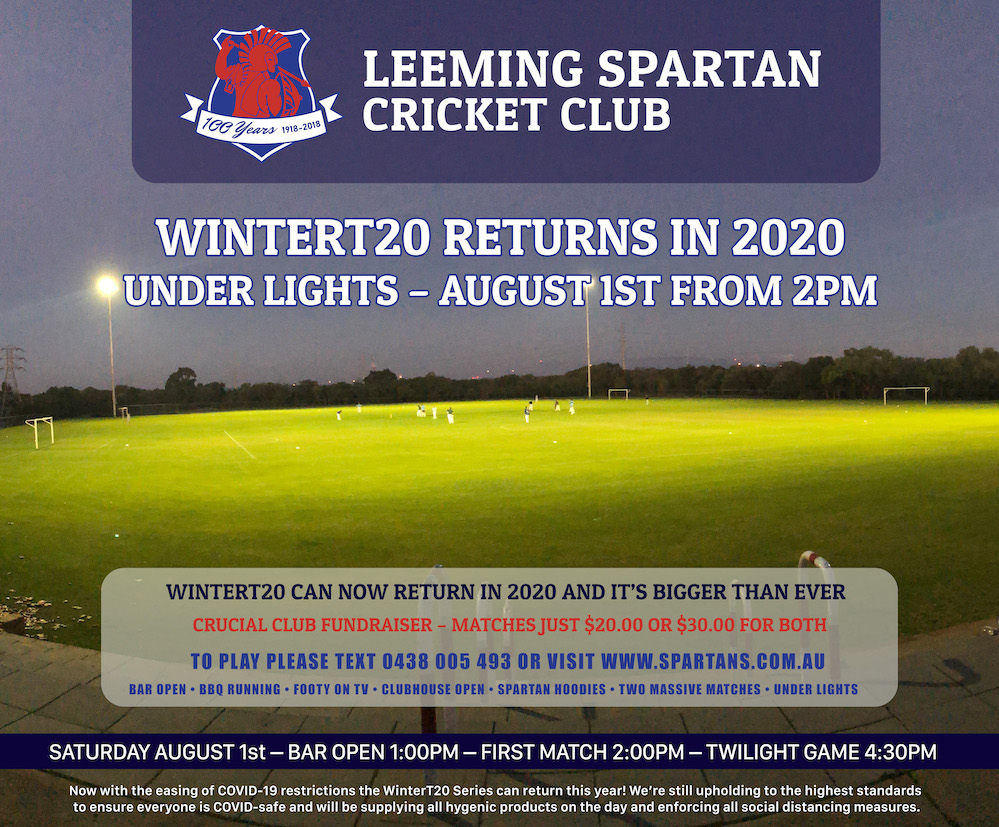 All about our WinterT20 Series:

The Leeming Spartan Cricket Club's WinterT20 Series is held annually during the months between May and September at our home ground on John Connell Reserve.

It is hugely popular and consists of two twenty-over matches played one after another in a very laid back and casual fashion.

The matches are quite the event and serve as a major off-season fundraiser for the Club as well as providing players with the ability to catch up during the winter and have a game of cricket before the season-proper.

What's more is we always have our bar open and BBQ running meaning it is a fantastic day out for everyone with plenty of laughs and entertainment throughout!

The matches are open to all players, even non-members or prospective members, and is a great way to get your cricket fix in the winter!

Our WinterT20 Series is held sporadically throughout the winter months, but always take place on Saturdays due to scheduling with the winter tenants on John Connell Reserve.

The events are always announced weeks in advance on our website under the images on the homepage, and flyers will also be added to this page accordingly.

We ask everyone to stay tuned to our website and Facebook Page, where we announce all developments regarding our WinterT20 Series.

Cricket is a summer sport but we have had enormous success in playing matches during the winter months at our home ground on John Connell Reserve.

Perth, Western Australia's climate means that even the winter months have many days full of sunshine and warm temperatures. In fact, some say that it is a better time to be playing because of the sunshine and 25º days can be far more pleasant than the hottest days of summer!

Perth's envious climate allows for many fantastic days during winter that are ideal for cricket. Sunshine and mid-to-high twenty degree temperatures mean it can be amongst the best times to play cricket.

The Leeming Spartan Cricket Club introduced matches of our WinterT20 series played at dusk and at night in 2018, played right here at our home ground on John Connell Reserve!

It offers players the incredible opportunity to play under lights using the orange ball, and the earlier sunset in the winter months means that its not long before the full effects of the artificial lights take over.

WinterT20 now offers players the unique and exciting experience to play cricket under lights, right here at the SpartanHQ!

The night games were made possible following the local government authority's upgrade of the light towers at John Connell Reserve - with the four massive towers now illuminating the pitch and oval in such a way that makes it ideal to play night cricket.

The lights are powerful enough to illuminate the ground, and make it great fun to play under lights at our very own club! Many of our WinterT20 matches are now played under lights, so be sure to look out for announcements on our website as to when the night fixtures are taking place!

This is quite a rare opportunity as our centre wicket is not covered in the winter months, and playing on an artificial wicket allows our matches to go ahead with ease. In addition, we also open up our clubrooms and change rooms during the day to provide visitors the opportunity to spend time in the heart of the Leeming Spartan Cricket Club!

Check out the location of the SpartanHQ below:

The WinterT20 series takes place on Saturdays during the months of winter. Typically, we hold about four or five of these over the months between May and September.

Each game day consists of two T20 matches (one after another) and are played between our club members with teams made up on the day.

The matches are scheduled somewhat randomly through the course of this off-season period, whenever the weather is expected to suit.

The match itself is a very casual affair that is used to have a bit of a hit before the season starts but also enjoy the winter sun and share plenty of laughs.

The matches are priced at $20.00 per game for each player.

We have our clubrooms open on the day, with our bar and BBQ running throughout to ensure everyone is able to enjoy the action whether that be out on the field or up on the balcony! 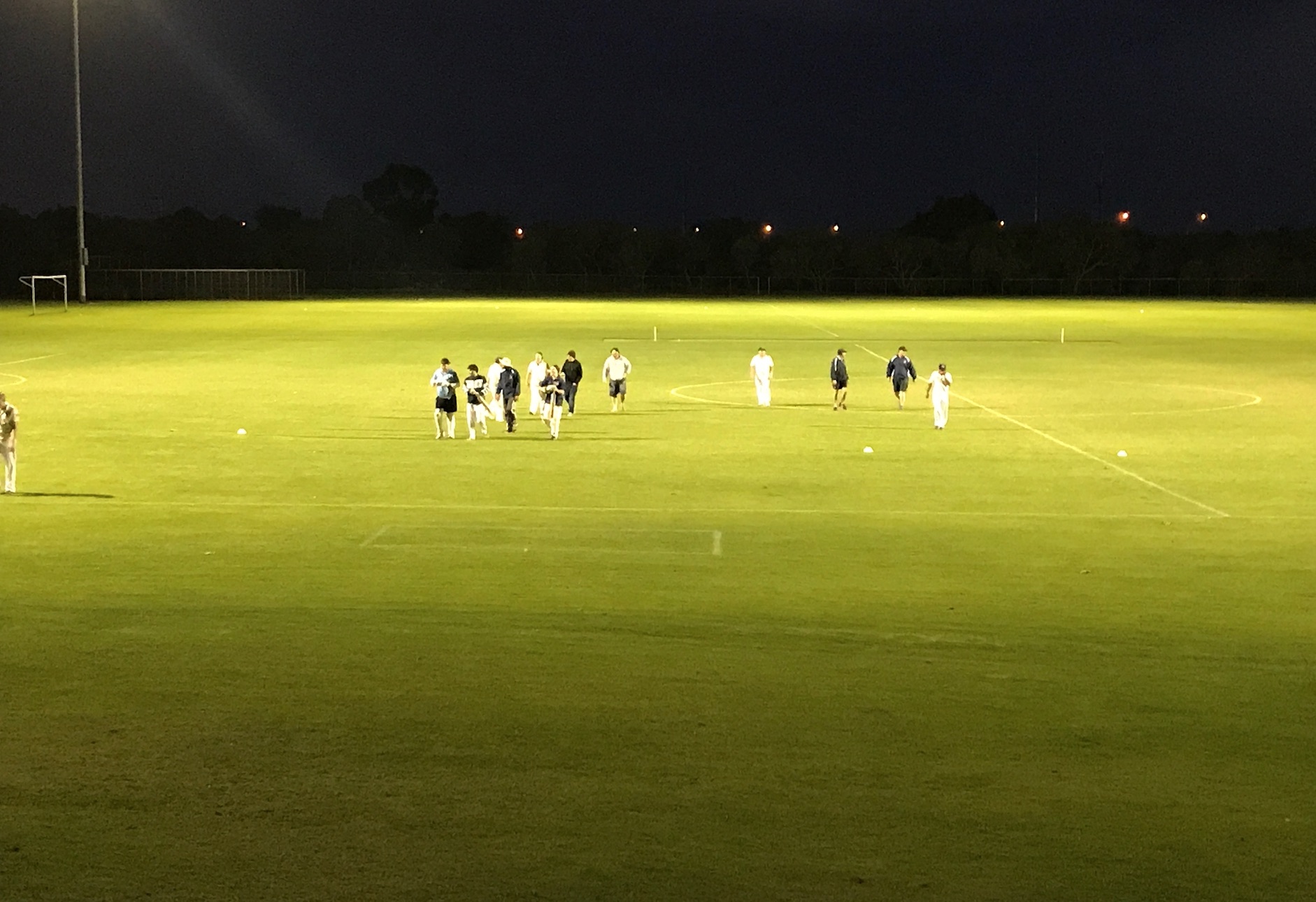