The second edition of our Spartan Scorecard Series looks back at a miraculous individual performance – and to date the only time in the history of the Leeming Spartan Cricket Club that a player has claimed all ten wickets.

In this second edition of The Spartan Scorecard Series, we are going back fifteen years to an unforgettable match against Kwinana – and much like our first instalment this game was also played at Orelia Oval in Kwinana.

This was to be a regular season fixture against the Kwinana cricket side in round 13 of what was back then called the ‘3A’ grade in the South Metropolitan Cricket Association.

It proved to be literally a once-in-a-century performance as our own Stuart Hennessey took the first, and to date only, ten-wicket haul in Spartan history.

Stuart Hennessey became the first and only Spartan to take all ten wickets in February 2005, with a scintillating performance against Kwinana, finishing with the astonishing figures of 10/43!

As you will see in the scorecards below, the match featured a series of low team scores from both sides, but is of course best remembered for Stu’s incredible efforts with the ball.

The match saw us on the back foot around lunch on day one as we were ultimately skittled for just 104 runs. In response, it was Stuart Hennessey and the young seamer Mick Bennett who opened the bowling, with the former picking up the first three wickets early to leave Kwinana in trouble at 3/33.

Things were to change yet again however because Hennessey then had to leave the match early in order to play in an indoor hockey match. Kwinana then put on a 92-run partnership to take the first innings points by stumps on the first day.

Day two the following weekend was a different story however, with Hennessey back and picking up where he left off to take the remaining seven wickets. In the end he finished with the best ever bowling figures by a Spartan player with 10/43, in this sensational individual performance.

Despite the fact we lost the match (we were unable to force an outright result on day two and Kwinana had already taken the first innings points), it is certainly best remembered by Spartans for this amazing individual performance.

Read on below to check our the scorecards or hit the button underneath to view all entries from the series! 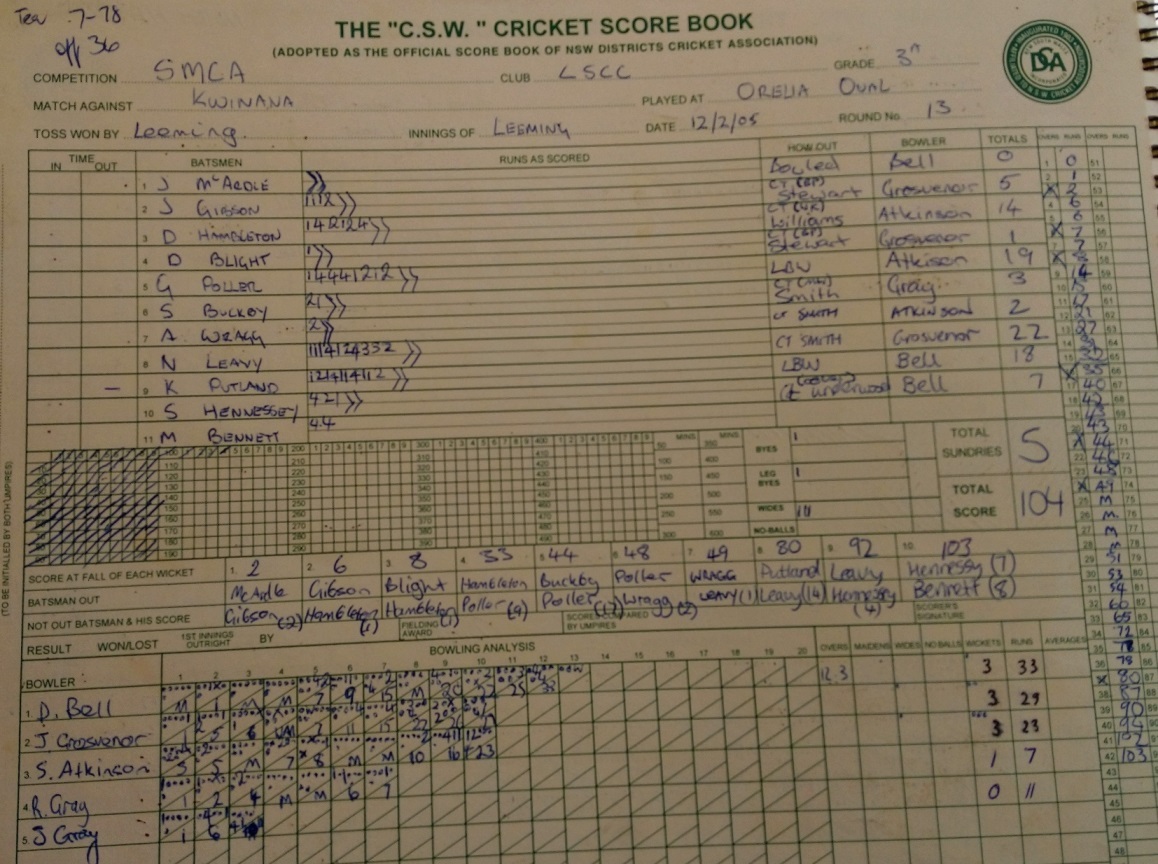 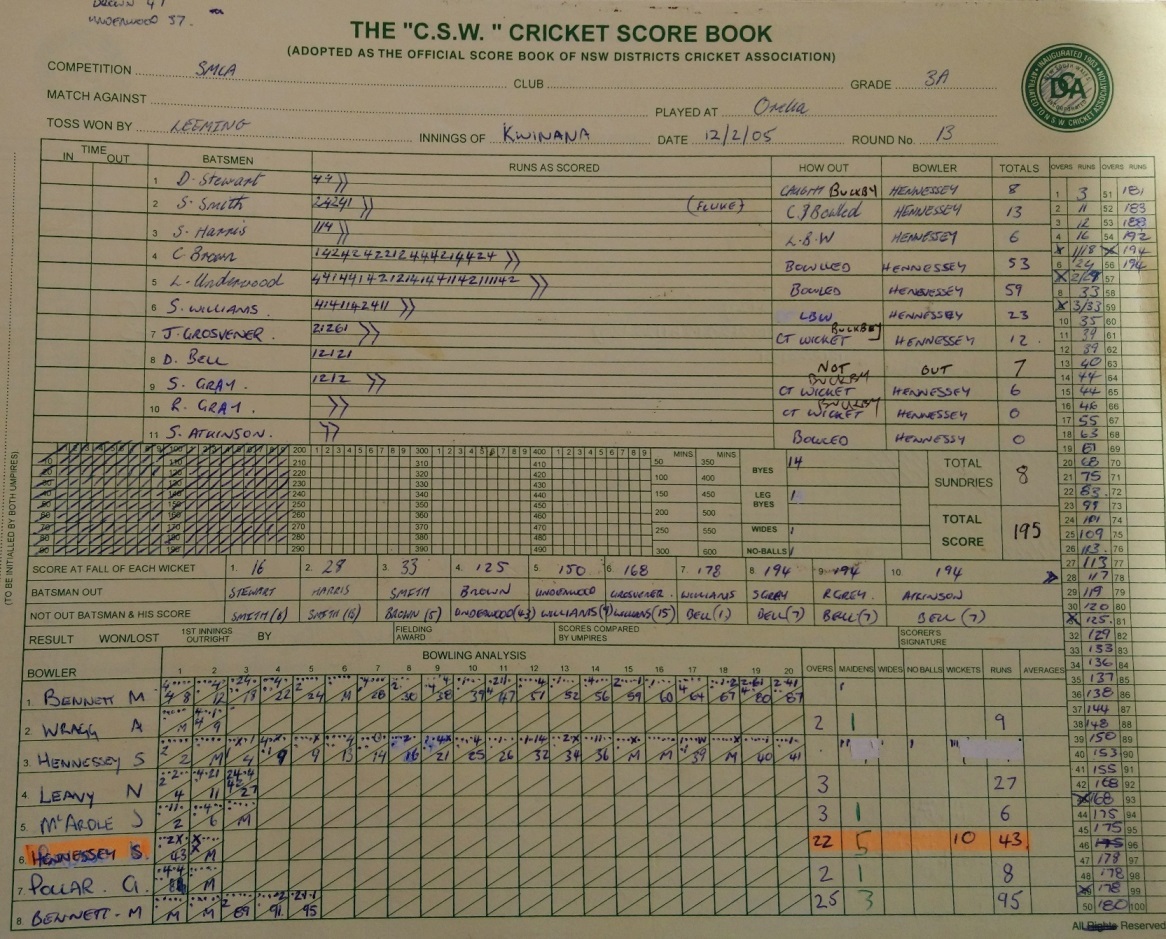 Our Bowling Innings “Where The Magic Happened” – Click For Larger Version

The match itself saw the Leeming Spartan Cricket Club win the toss against Kwinana at Orelia Oval, electing to bat in what would quickly become a regrettable decision as we lost 3 wickets for just eight runs early.

The match itself took place on Saturday February 12th in 2005, in what was round 13 of the 3A Grade Competition in the South Metropolitan Cricket Association. The Spartan innings would prove to be underwhelming as we mustered only 104 runs in less than 43 overs.

It was our response with the ball that makes this match so memorable, as in reply Kwinana looked to start strongly, reaching sixteen without loss in pursuit of the small total before the man of the hour Stuart Hennessey took three quick wickets to leave them wobbling at 3/33.

As mentioned though there was not to be a fairytale defence of the small total as Stuart had to leave the match early. This allowed the remaining bowlers to toil away unsuccessfully as the Kwinana batsmen at the crease put on a match-winning 92 run partnership and thereby take the lead and first innings points.

The following week was a different story though, as Hennessey returned and claimed the final seven wickets, with Kwinana losing 7/70 to be all out for 195. Stuart finished with the best ever Leeming Spartan bowling figures in claiming his 10/43.

Another interesting statistic from the innings was that it was only Stuarts who were responsible for the wickets – with Stuart Hennessey and Stuart Buckby (who played as wicketkeeper) claimed all ten places in the “how out” column for dismissals.

All ten wickets – including the fielder responsible – were shared amongst two players. Stuart Hennessey, who took six all by himself, and Stuart Buckby, who claimed four catches as wicketkeeper.

Buckby took four catches off Hennessey behind the stumps, while Hennessey himself got the remaining six wickets in the form of bowled, LBW, or caught and bowled.

A second innings was commenced and saw us make 130 in response but time was not to be on our side and the match quickly ran out of overs. Despite the record performance, Kwinana were the ones who took the points.

Nevertheless, this was to be a truly astonishing bowling performance from one of our own, and it will certainly live long in the memory of all players as the best ever figures by a Spartan! 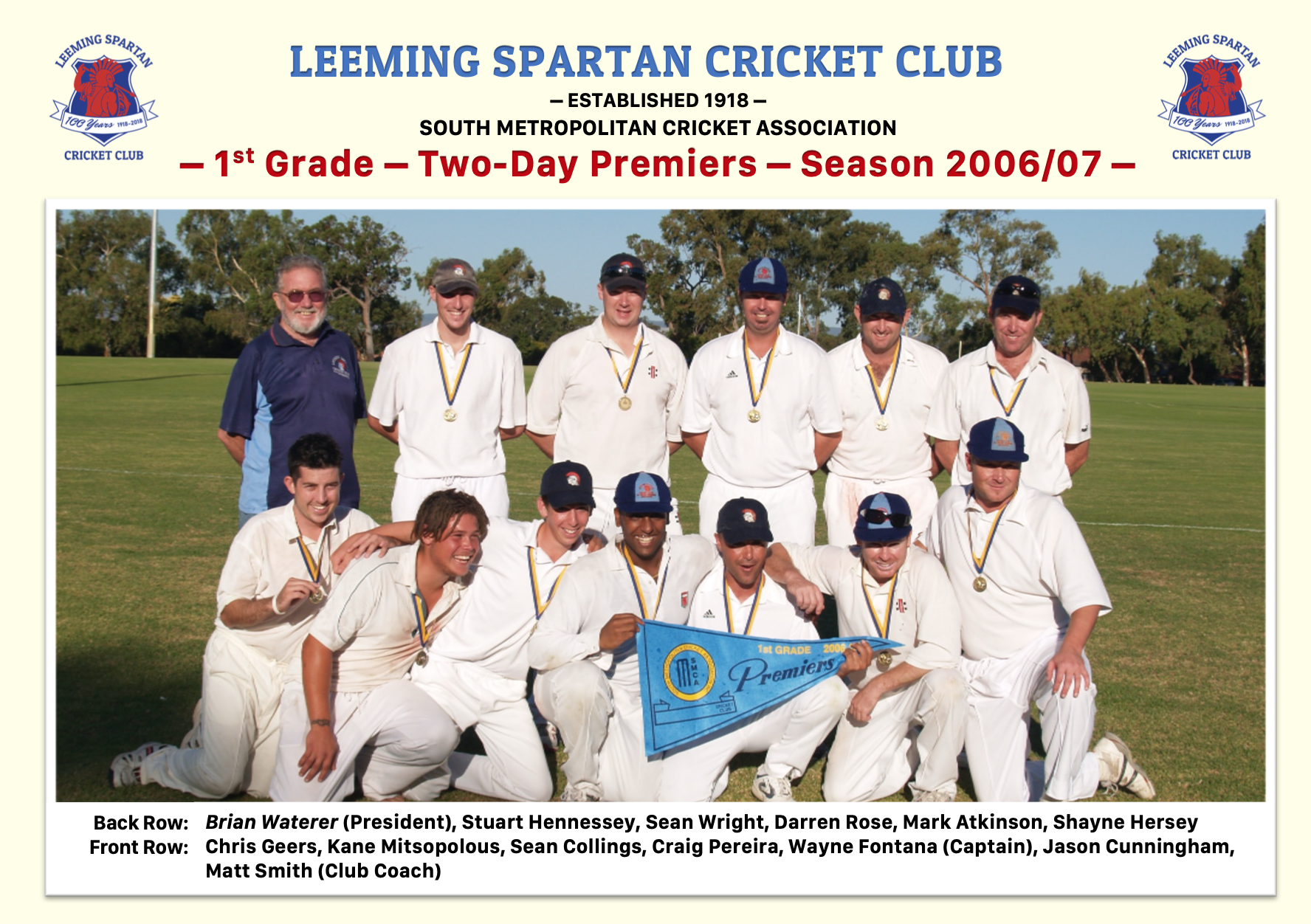 Stuart Hennessey and the rest of the First Grade side celebrate a premiership together in 2007.

This was our second entry in our brand new The Spartan Scorecards Series, and with plenty of matches to list, we hope to bring you a new entry at least every week this off-season! Be sure to stay tuned, and consider subscribing to our Email Newsletter if you haven’t done so already – that way you’ll never miss an entry!

We’ve also revived the From The Spartan Archives series that was popular many years ago! Be sure to read the latest entry released yesterday – number five – by clicking here. It’s the perfect company during this isolation period!