The Spartan Archives have been reopened in 2020 and we’re bringing you one well and truly from the early days – November 1939 in fact – as the Spartan Cricket Club and CBC rivalry added one of its earliest chapters!

Today, we are looking at a match from that season, against the CBC Old Boys at Fremantle Park that was truly a one-sided affair. We thought it would be pretty clever to look at a match against the arch-rivals from wayback given in the season 2019/20 just gone, our First Grade were due to play the same opposition in the Grand Final before it was called off due to the Coronavirus.

The match in question was featured in The Fremantle Advocate newspaper and documents a match report of the encounter. The game was given the following opening spiel;

“Runaway wins by Spartans and Court Unity Foresters were features of the matches played in the Fremantle Mercantile Association competition on Saturday. In each of the games in which these teams participated, over 300 runs were scored during the afternoon, and in addition to the first century of the season, scored by L. Pearce, several good individual efforts were recorded. Matches were marred by short teams fielded in some cases.“

It was commonplace for Spartan games to get featured in the local rag, as you will see below. Before we get into that though, have a read through on the background surrounding how the Spartans went about getting our information out via the newspaper. 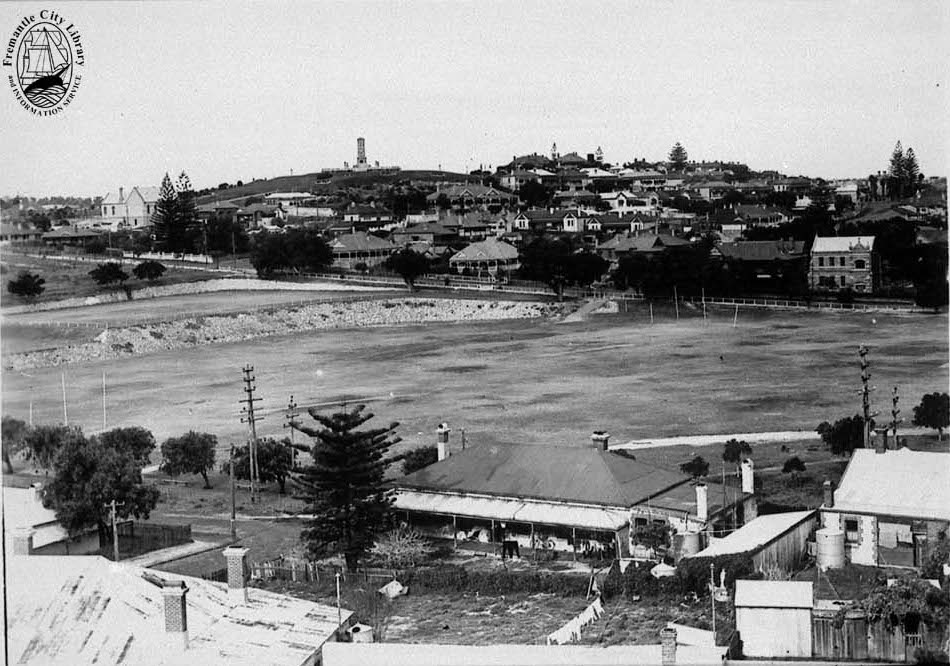 In the early days of the Club, long before websites and yearbooks, newsletters and flyers, many of our results and latest news came in the form of the black and white ink from the local newspapers that were around in the time.

We made many appearances in The West Australian long before it became a series of tabloid pages and clickbait articles, but we were most heavily featured in The Fremantle Advocate and Fremantle Gazette due to our location in the heart of Fremantle at the time.

As is common knowledge for Spartans past and present, the Club was founded in Fremantle in 1918 and began playing on the decks at Fremantle Park – which still exists today and is now being utilised by the Bicton Attadale Cricket Club.

Much of our early history is captured in the pages of these old and now long defunct newspapers, but thanks to the wonderful world wide web, they are available for viewing online for free. One such article of note was published in November 1939 that denoted a match between the Spartans and the CBC Old Boys.

The year of 1939 was of course the beginning of the Second World War, on September 1st more specifically, and this match was played in the very early days of the global conflict a few months later in November. Having survived through the Great Depression and rise of Nazism in Germany, it was World War Two that would ultimately cause the Club to go into hiatus several years later in 1942.

Fremantle Park, which was the ground where most matches in the Fremantle & Districts Mercantile Cricket Association were being played was deliberately covered in 1942 as pictured below because of the fear of Japanese airforces that would attempt to land on the flat open space. With that decision came the end of the Spartan Cricket Club until the competition of World War Two. 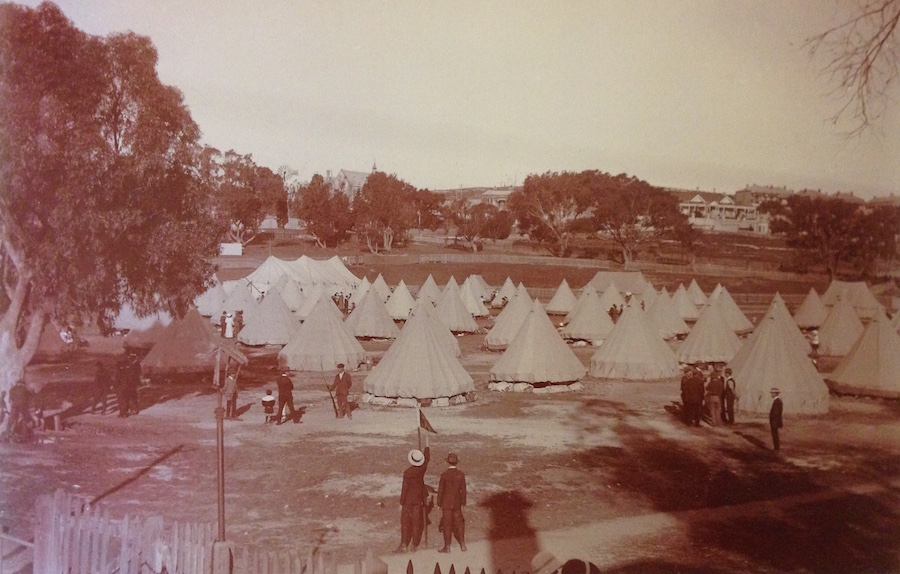 As you’ll see in the article in the newspaper below, the match itself proved to be quite a one-sided affair, with the Spartans amassing 9/229 before beating CBC Old Boys outright, knocking them over for 54 and 34 respectively.

The full article is included below as it appeared in the newspaper, as well as some photos underneath of  the entire original newspaper. Some may find it somewhat difficult to read as the old print has worn over time, so we have typed it out to make it more legible. We should note also that CBC only had the eight players available for the match so they were certainly up against it even before the toss of the coin. 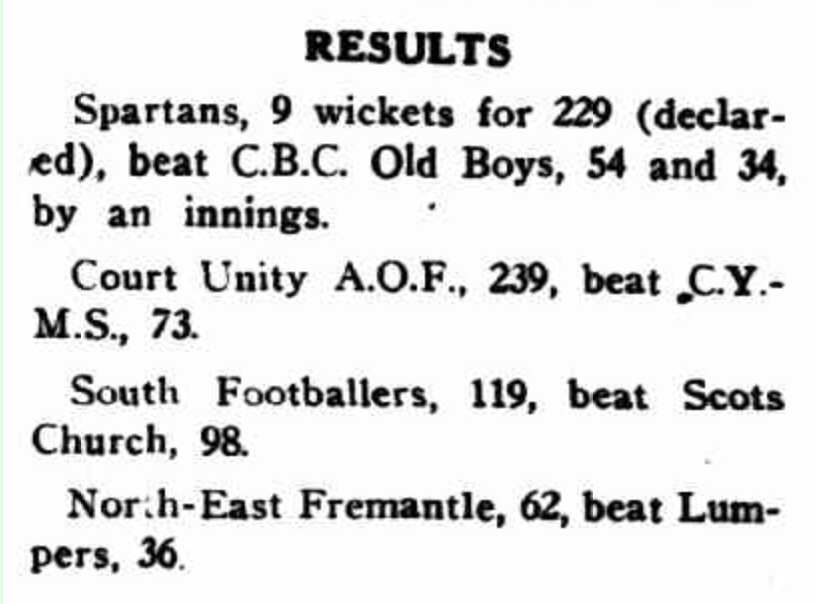 The full list of round results were also listed in the Fremantle Advocate as you will see pictured left. It is worth noting that the South Footballers (or South Fremantle Footballers Cricket Club) followed us during our move from the Churches Cricket Association in 1929.

The 1939/40 season was all round quite a strong one for the Spartans as we qualified for finals but were ultimately defeated by the Lumpers Cricket Club in the semi-final.

Later in the season we also amassed 4/251 in just 100 minutes as our skipper Ian McClumpha led the way with 110, and he was very well backed up by Phil Tasker with 104. This same pair played for the F&DMCA against York the following day in the association competition and each made a score in the nineties. Additionally, Spartan Bob Ballantyne (who is also well known as the long-serving post-war secretary of the Fremantle Cricket Club in the WACA competition) took a hat trick.

Ian McClumpha with 542 runs and 48 wickets had a magnificent year this season, setting a record for the greatest all-round performance by a Spartan player that stood for more than five decades.

With the season recapped, it is now onto the article that appeared in the newspaper.

The Header of The Fremantle Advocate the day the article was published.

“With only eight men available, C.B.C. Old Boys were handicapped in their match with Spartans. The shortage probably had no effect on the result however, for Spartan batsmen were in great form, and compiled a score which might have staggered any opposition.

With Langlands and Stenhouse as their opening batsmen, Spartans set about the task of run-getting in no uncertain manner, Langlands hitting four fours and a two off the first over. Forty-three runs had been scored before Gallagher broke up the partnership by dismissing Stenhouse, who had 16 runs to his credit. I. McClumpha contributed only 5, but Langlands was still hitting vigorously, and the second wicket fell at 64. G. Prince proved himself a worthy partner for Langlands, and the pair remained together until Langlands was bowled by Dolan. He had scored 58 runs, and the total at the fall of the third wicket was 140.

Prince continued to punish the bowling mercilessly, and before his dismissal scored a total of 80, including six sixes. Several wickets fell cheaply, but F. McClumpha (24) and several others contributed usefully, and a declaration was made with nine wickets down for 229. Naturally there were no brilliant bowling averages, but Mahoney plugged away to take four wickets for 89, while Dolan dismissed the two top-scorers, at a cost of 30 runs.

J. McMahon (16), Grady (18) and Dolan (12) struggled along in the early stages of the C.B.C. innings, to put 53 runs up by the fall of the third wicket. None of the other batsmen stood up to the attack, however, and the next four men were dismissed with the addition of only one run, the innings closing at 54. I. McClumpha (4/11) and B. Ballantyne (2/28) were the successful bowlers.

It is also of note that an announcement about training was posted in the same newspaper several weeks later.

It read as follows “The Spartans Cricket Club, Fremantle, will commence practice on No. 3 practice wicket at 5 o’clock tonight. Those desirous of joining the club for the coming season are asked to attend practice or communicate with the secretary, Mr. A.E. West.”

It goes to show that despite all that has changed in eighty-one years, the fundamentals remain the same!

In all, the match played in November 1939 against CBC Old Boys proved to be a decisive victory for the Spartan Cricket Club. As mentioned, we would go on to have a highly competitive season, ultimately finishing in the finals before being defeated in the semi.

The match saw some very solid performances with Langlands and George Prince top scoring and defeating the opposition almost single-handedly with their terrific partnership in the early stages of the match.

For the record, our match against Lumpers in the first division semi-final saw them make 165 in their first innings and 127 in their second, defeating us 126 all out and a paltry 67 all out in the second. CBC Old Boys meanwhile would qualify for the second division final.

As for our triumphant victory over the arch rivals earlier in the season, it was certainly one of the highlights of 1939/40. Finally, the full page from The Fremantle Advocate as well as the front page of the same edition are listed below. 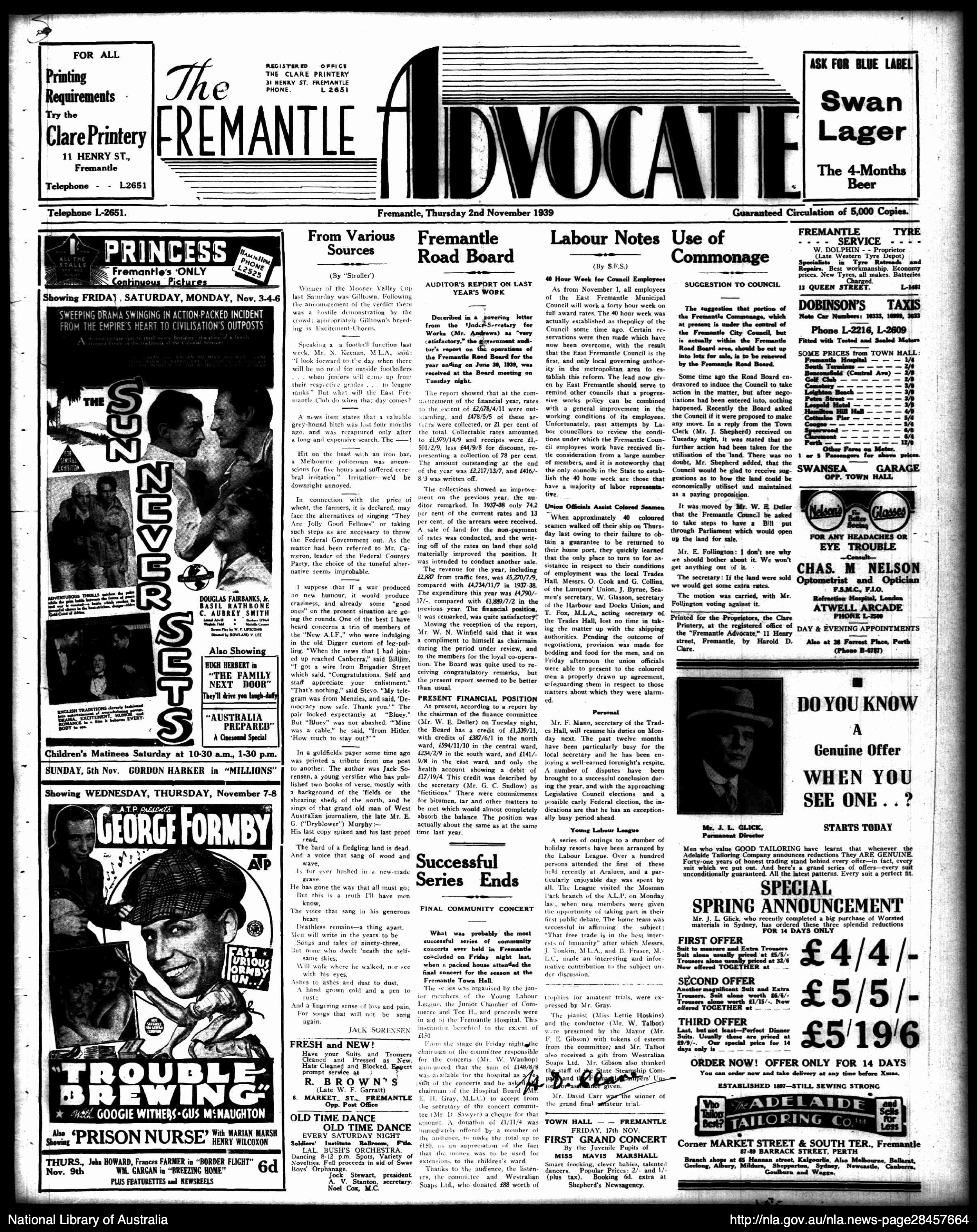 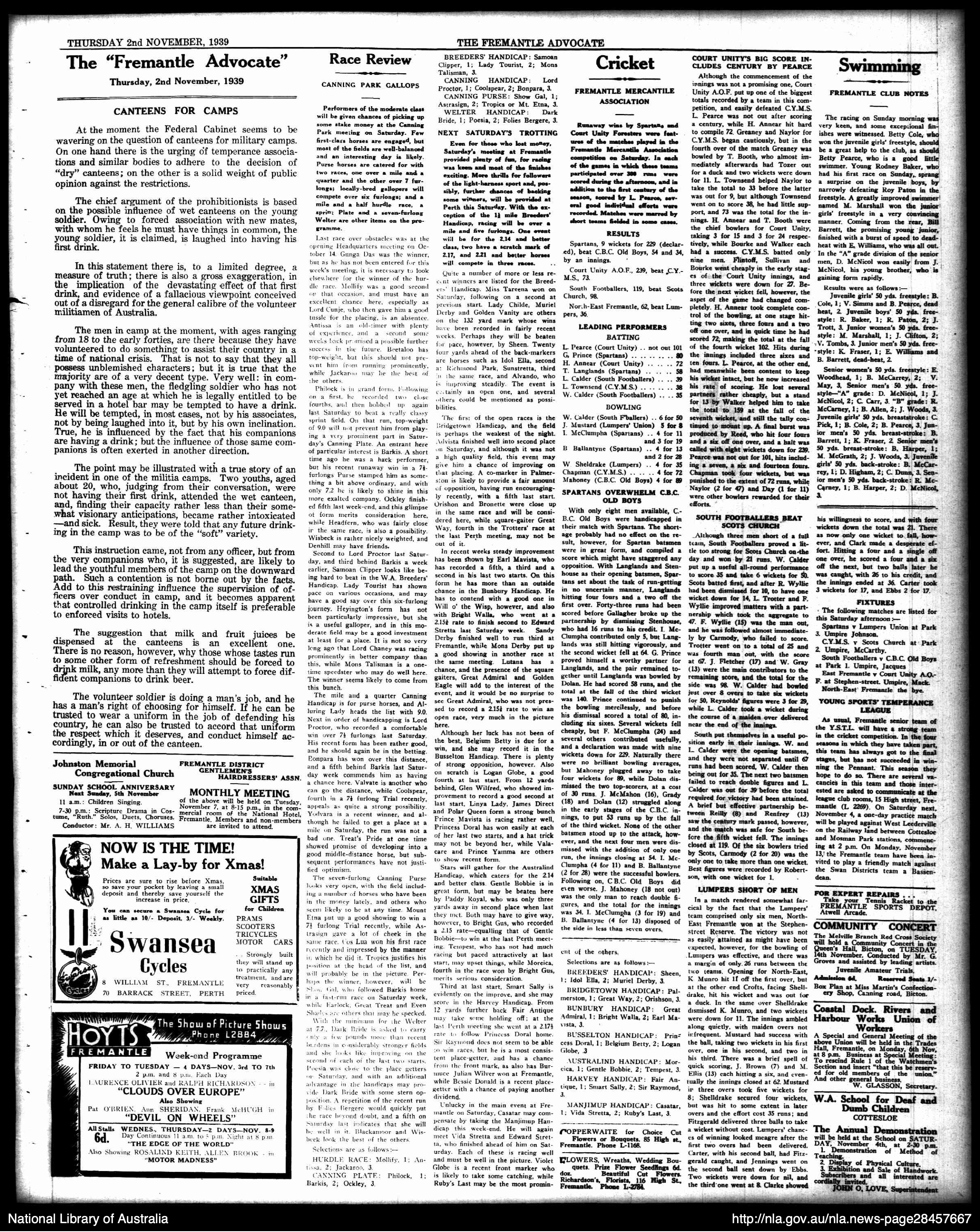 Pages one and three of the November 1939 edition of The Fremantle Advocate including the notice above.

This is the fifth edition of the Leeming Spartan Cricket Club’s “From The Archives” series, and the first in over three years. We have brought it back bigger than ever and have highlighted a memorable victory from 1939. We hope to bring you regular instalments this off season for your perusal and encourage anyone to submit stories worth sharing.

Additionally, you may also wish to immortalise some of the memorabilia you may have at your disposal inside our incredible trophy cabinet at our clubhouse, with special thank you to those who have already donated priceless pieces! Should anyone wish to aid with the development of the series, please feel free to Email me!