This off-season we are bringing you some of the most memorable matches in Leeming Spartan history – scorecards and all – as we recount the many epic encounters in our centenary of history.

In this inaugural edition of The Spartan Scorecard Series, we invite you to travel back over twenty years to the 3rd of March in 1999, in our 2nd Grade match against Hilton, This was the Grand Final of the two-day competition for that grade and ranks as a highly memorable one in Spartan folklore.

This proved to be an astonishing victory for the Spartans as we amassed 9/238 thanks to the efforts of opener Peter Phillips who made 105. Peter was there from the first ball of the day at 1300hrs and batted through to his century, before finally being dismissed just shy of four hours at the crease.

This ton would have to rank as one of the Leeming Spartan Cricket Club’s finest innings, because although to date there have been a whopping 344 centuries scored by Spartan players, Peter’s was the first, and to date only, century in a Two-Day Final. Steve Quartermaine scored one against East Fremantle in a One-Day Final, but Peter’s is the only one for an end of season Grand Final.

Another interesting note is that in these early days of the South Metropolitan Cricket Association (the competition in which we participate), the way grounds for finals worked was very different to how it does now. Grounds had been ranked accordingly by teams during the course of the season and were then allocated in order by rank down through the grades. As such, we found ourselves playing at Orelia Oval against Hilton as it was deemed to be the second best ground in the competition at the time.

This is of course despite the fact it is no-where near Hilton or Leeming, and actually is closer to Kwinana Town Centre, meaning players were encouraged to lock their car doors before play! It is interesting to think where John Connell Reserve, the home of cricket, would have rated on the scale at the time.

Nevertheless, despite the lack of home ground advantage, we won the match and history was made. The first century in a two-day final and what a time to do it! Be sure to check out the full scorecard below! 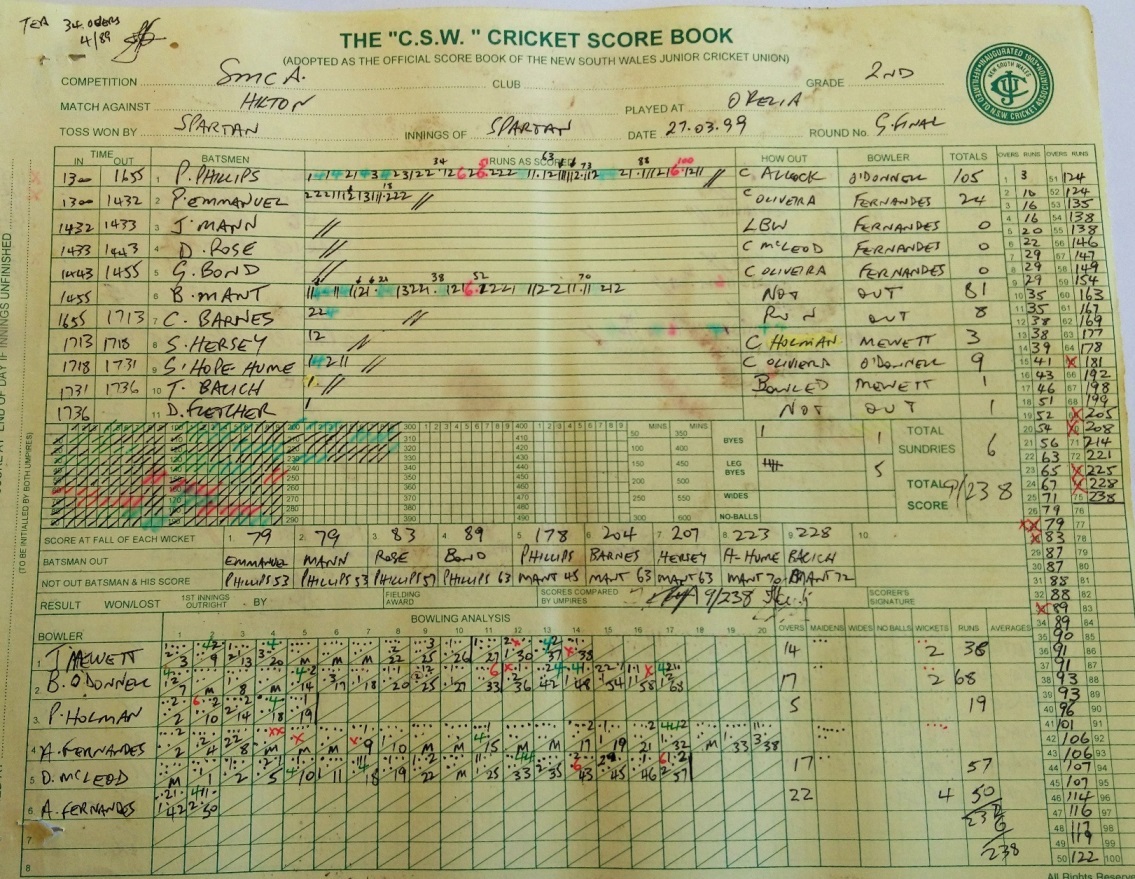 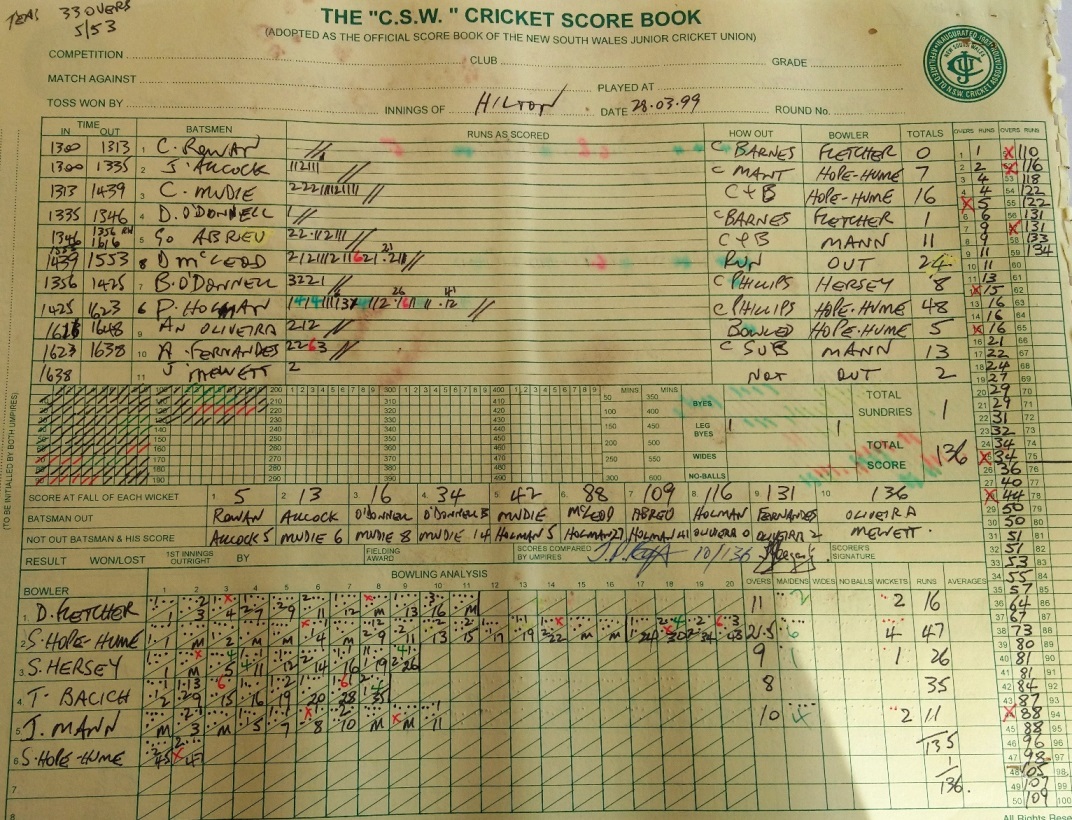 The match itself got off to a flyer for the Leeming Spartan Cricket Club after they won the toss and elected to bat in this two-day second-grade grand-final – quite a hyphen-filled-fixture – that took place on the 27/03/1999.

The two openers in Peter Phillips and Paul Emmanuel got things going in our favour with a terrific 79-run opening stand, seeing off the new ball and scoring at a healthy rate. After Paul’s dismissal, you’ll see above that it wouldn’t be a Spartan fixture without the hint of the infamous Spartan Shuffle, as we lost four wickets for just ten runs to leave us in trouble at 4/89.

Phillips meanwhile was continuing to ply his craft at the other end and was joined and well supported in Brad Mant, with Manty also contributing an invaluable 81 not out as the two players put on an eighty-nine run stand in 120 minutes to well and truly put us back on top in the encounter. At 5/178, Phillips was finally out having earlier brought up his century, our first ever in a two-day final.

The innings progressed with Mant passing fifty, and batting very well with the lower order to heave us to 9/238 after our 75-overs at stumps on the first day.

In reply, the Spartan bowlers were exceptional to produce a fantastic all-round performance as we dominated both days. Hilton were all out for 136, largely thanks to Steven Hope-Hume’s 4/47 and Darren Fletcher’s 2/16 as our two opening bowlers.

A fantastic victory for the Club came at twenty minutes to five on day two with the fall of the final wicket, and a hugely celebrated victory followed. Congratulations to all players and supporters on the great win, and what a way to end the millennium! 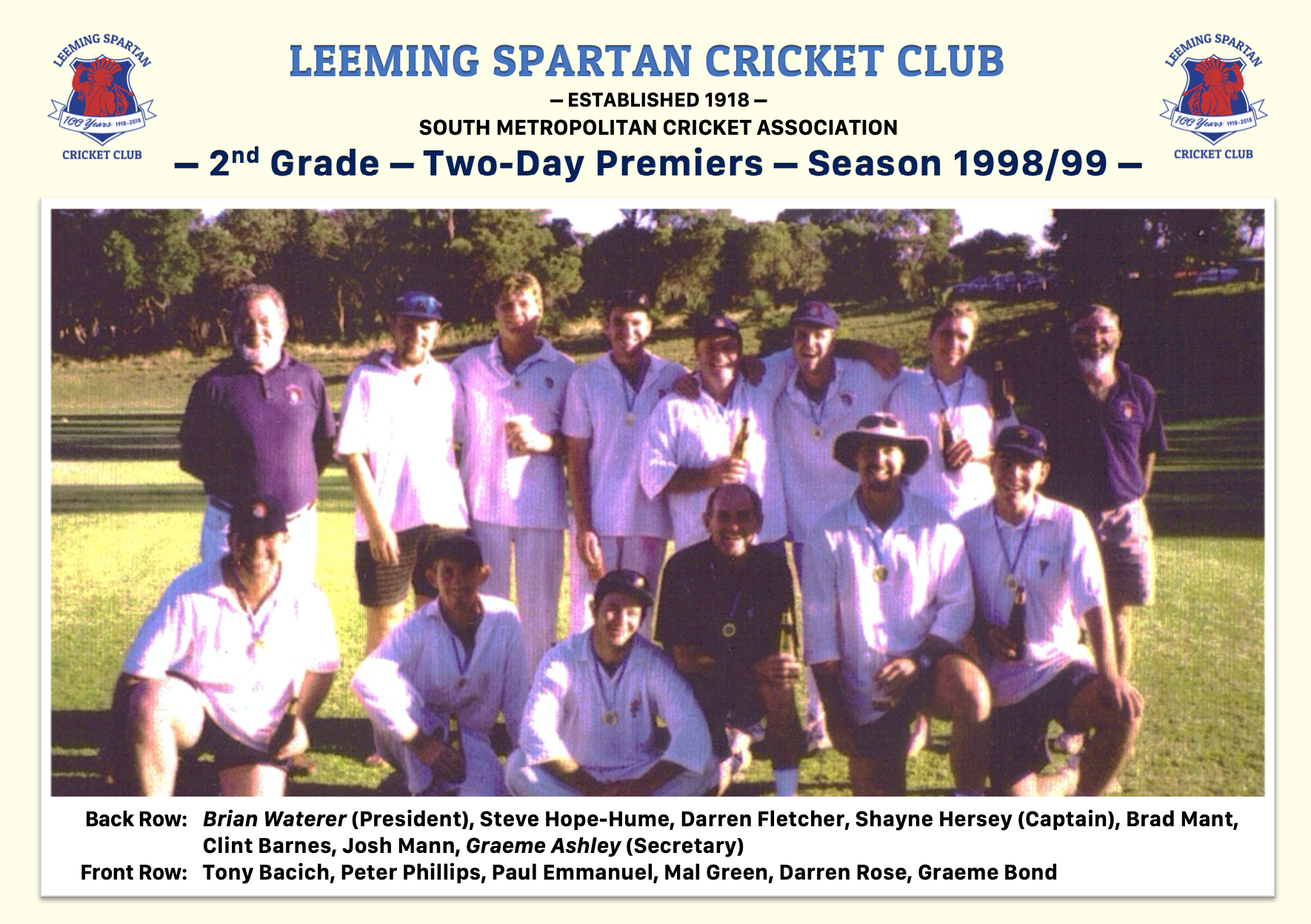 This was our first entry in our brand new The Spartan Scorecards Series and with plenty of matches to list, we hope to bring you a new entry at least every week this off-season! Be sure to stay tuned, and consider subscribing to our Email Newsletter if you haven’t done so already – that way you’ll never miss an entry!

Finally, we’ve also revived the From The Spartan Archives series that was popular many years ago! Be sure to read the latest entry released yesterday – number five – by clicking here. It’s the perfect company during this isolation period!