The fourth edition of our Spartan Scorecard Series sees us head back to what is largely considered to be our greatest ever premiership triumph – the 1992/93 First Grade Grand Final against CBC!

In this fourth edition of The Spartan Scorecard Series, we are going back almost thirty – yes thirty – years to the 1992/93 season as the Leeming Spartan Cricket Club won its first premiership at First Grade level in twenty years in spectacular fashion against our arch-rivals in CBC.

This incredible season is fondly remembered by many of our Life Members and former Spartans to this very day. The grand final and sensational result would have to rank as one of the greatest matches in our one-hundred year history. Incredibly, we defended the small total of just 115! Below, you can check out the recap of the match as well as the full scorecards.

The Spartans had reached the Grand Final two seasons earlier in 1990/91 but were ultimately defeated. The following season saw us slip out of finals contention and dash many hopes at the time of a long awaited First Grade premiership, having last won the flag in 1972/73.

It was said that “the season hadn’t gone too far before it became alarmingly apparent that the marvellous successes of the previous season weren’t going to be repeated. The First grade side, although unchanged from the Grand final side, never looked like performing anywhere near well enough to make the finals and ultimately finished in fourth place.” It was thus that we entered the 1992/93 season with some apprehension.

We won the First Grade Premiership in 1992/93 – considered arguably our greatest of all time by defeating CBC in a highly memorable encounter. It served as our first flag at the top level in twenty seasons.

The apprehension experienced pre-season soon faded away as the playing ranks received a real boost with the recruiting of several first and second grade players from the Hills Association. In particular all-rounder Graham Pound and several gifted young batsmen in Paul Hitch, Matt Smith and Greg Dudley all joined the Leeming Spartan Cricket Club this season and greatly improved the quality of the first grade side.

The side was strong throughout the season, and the great on-field efforts were justly rewarded after we defeated CBC in the Grand Final at John Connell Reserve. Read on below to learn all about this incredible match!

It’s safe to say that by 1992 the Spartans were desperate to win a First Grade premiership, having not done so for over twenty years. The elusive premiership was within touching distance in 1991 as we made the Grand Final, only to lose to CBC on that occasion.

1992/93 saw us turn things around though, and we managed to pick up some solid cricketers in the months before the season began. These players were certainly not just “ring-ins” for the season though, as all either went on to become Life Members or part of our Team of the Century in the decades that followed.

This influx of playing talent at the top meant that there was also a filtering down of good players to the other grades to the point where we finished up with five very competitive sides. The Thirds and Fifths both reached the four which gave the Leeming Spartan Cricket Club its best overall result since the 1977/78 season.

In all, Paul Clement, Peter McGilvray, Paul Hitch, Matt Smith, Roy Spencer and Greg Dudley would all go on to be inducted to the Team of the Century at our Leeming Spartan one-hundredth anniversary gala in 2018. The players mentioned would also play key parts in the grand final and premiership victory.

Perhaps just as impressive as these stats is the fact that since this date, the Leeming Spartan Cricket Club has only missed finals in the First Grade on five occasions.

You can check out the scorecards below; 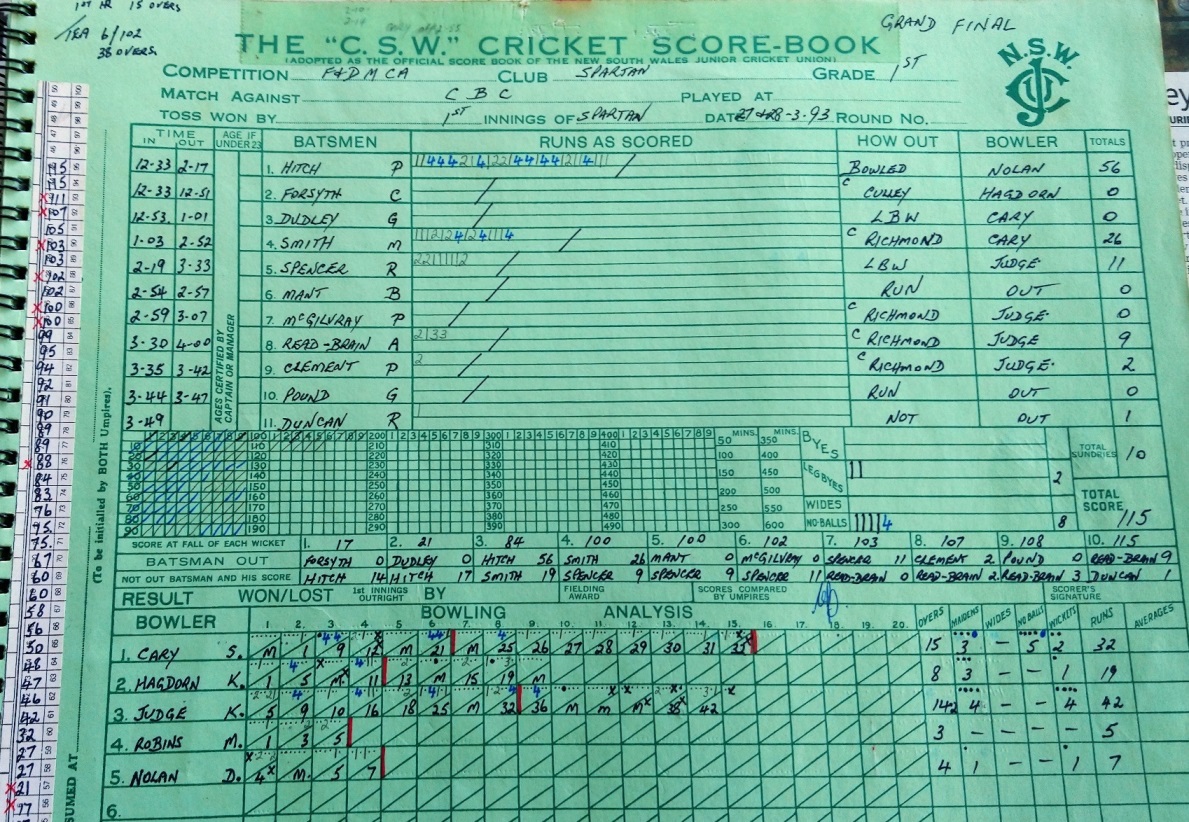 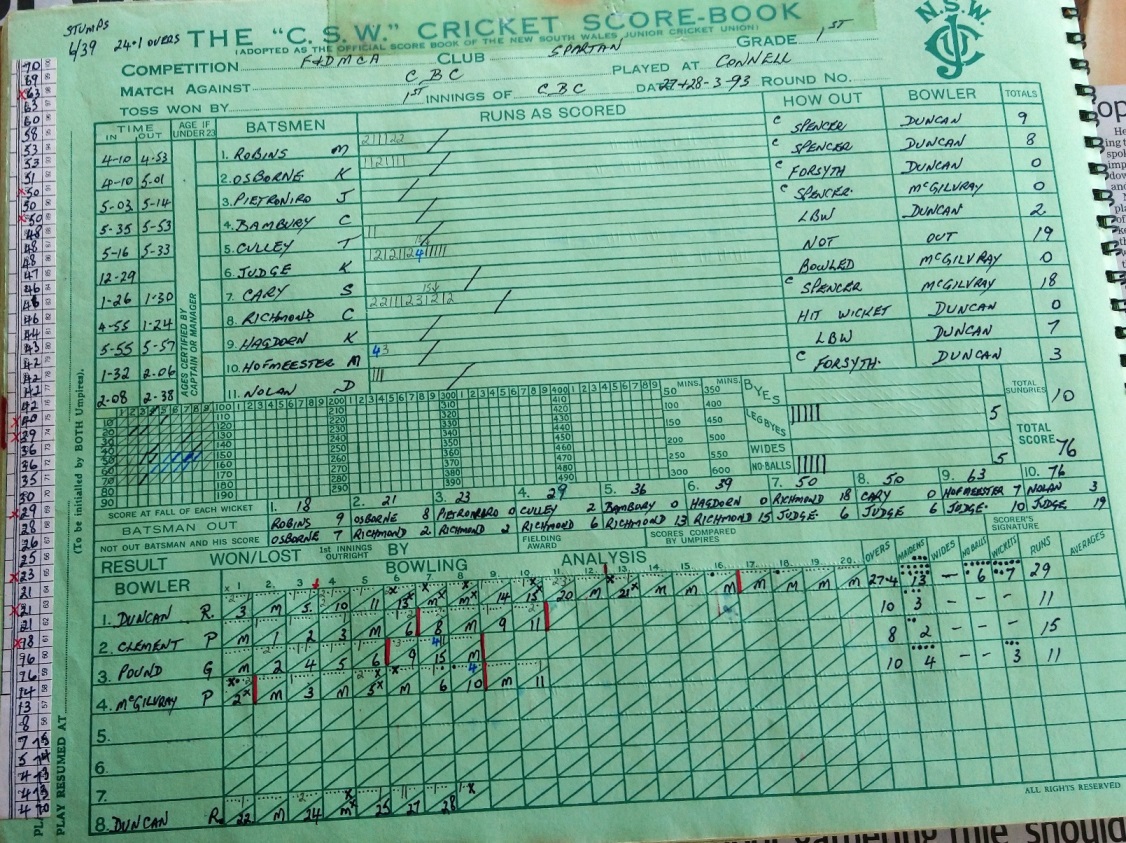 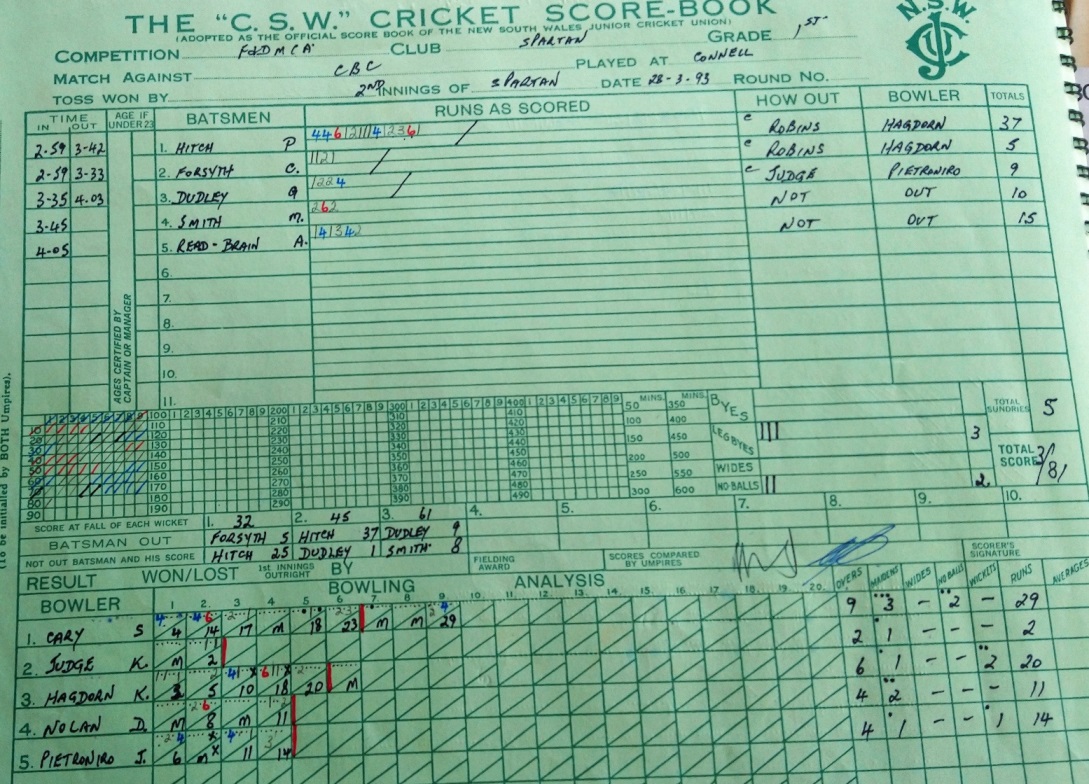 The Spartans won the toss and elected to bat at John Connell Reserve, with day one taking place on March 27th, 1993. Paul Hitch and Craig Forsyth got things underway for the Spartans, putting on an opening stand of 17, before Craig was caught to become the game’s first wicket.

Things were wobbling a little at 2/21 when Dudley was dismissed, however Hitch continued on and formed the highest partnership of the innings alongside Matt Smith, the latter of whom made 26. It was Hitch however who would become the third wicket when dismissed for a fine 56, that also included nine boundaries with the score at 3/84.

Smith was next to go at 4/100, however things took quite the turn as the last six wickets fell for just fifteen runs. Roy Spencer was the only other player to pass double figures, and ultimately we had been dismissed early for just 115 on the stroke of 4pm. The five ducks in the innings didn’t make for pretty reading early on, however what followed ensured that they were quickly forgotten. CBC’s Ken Judge took four wickets to be the pick of the opposition bowlers.

It was a sub-par score yes, but the morale between the players was said to be positive nonetheless, and the big contingent of Spartans in the stands would fuel the belief that we were in with a real shot. Even still, the remaining hour of play on day one is something that could never have been anticipated.

CBC had two of their best players opening up and started progressively, reaching 18 without loss and take the runs required to under one-hundred.

What happened next though is the stuff of Leeming Spartan folklore.

Eighteen without loss quickly, and quite incredibly, became 6/39 at stumps on day one – with the Spartan bowlers providing a fantastic line and attacking style that seemingly left the opposition fending catches for fun.

1/18, 2/21, 3/23, 4/29 – the batsmen came and went. Anyone who has played on John Connell Reserve knows that the walk out there takes a day and a half as it is, so doing the return trip immediately after is not an ideal way to spend a Saturday afternoon unless you’re training for a marathon!

Rod Duncan was sensational with the ball in hand, claiming the first four wickets. Skipper McGilvray then claimed one of his own before Duncan rounded out the amazing afternoon by having Kim Hagdorn out hit wicket. It truly was one of the most sensational and ferocious spells witnessed on John Connell, and perfectly set up day two the next afternoon. Duncan finished the day with a five wicket haul already to his name.

The first wicket on the second day fell with the score on just 50, and CBC were certainly in dire straits in pursuit of the small total, with just the three batsmen remaining.

Another two wickets soon followed, and at 9/63 the writing was well and truly on the wall. The enormous celebrations began not long thereafter as Rod Duncan completed a terrific bowling performance by claiming his seventh wicket and CBC were all out for 76.

Spartans had seemingly won the match – rolling the opposition for just 76 and the euphoria amongst the players and those in the crowd had begun – momentarily that is..

By this stage the time read 3pm on the John Connell clock, with only two and a half hours possibly remaining for any chance of a second innings. Surprisingly though, CBC elected to play on, a deficit of 39 runs and sent the Spartans in to bat a second time. This remains a topic of much discussion to this very day, but ultimately proved to be a short-lived decision.

Hitch and Forsyth again opened the innings, and Hitch quickly picked up where he left off, taking no prisoners as he smashed three quick boundaries including a remarkable six over point. The second innings served to only delay the inevitable as Spartans reached 3/81 before it was finally decided the teams would shake hands and the celebrations could officially begin.

Despite the delayed finish – we could finally celebrate! Stumps were called and the Spartans had won their first premiership in twenty years!

It rounded out what was a fantastic and hugely memorable match at John Connell Reserve, perhaps our greatest ever grand final victory of all time. It also sparked a great resurgence of the Leeming Spartan Cricket Club as a force in the top grade, and to this date we have only missed finals at the top level five times.

Congratulations to all the committee and players involved in this incredible win, and with the thirty-year anniversary not far away it seems certain that a massive reunion will be held accordingly! 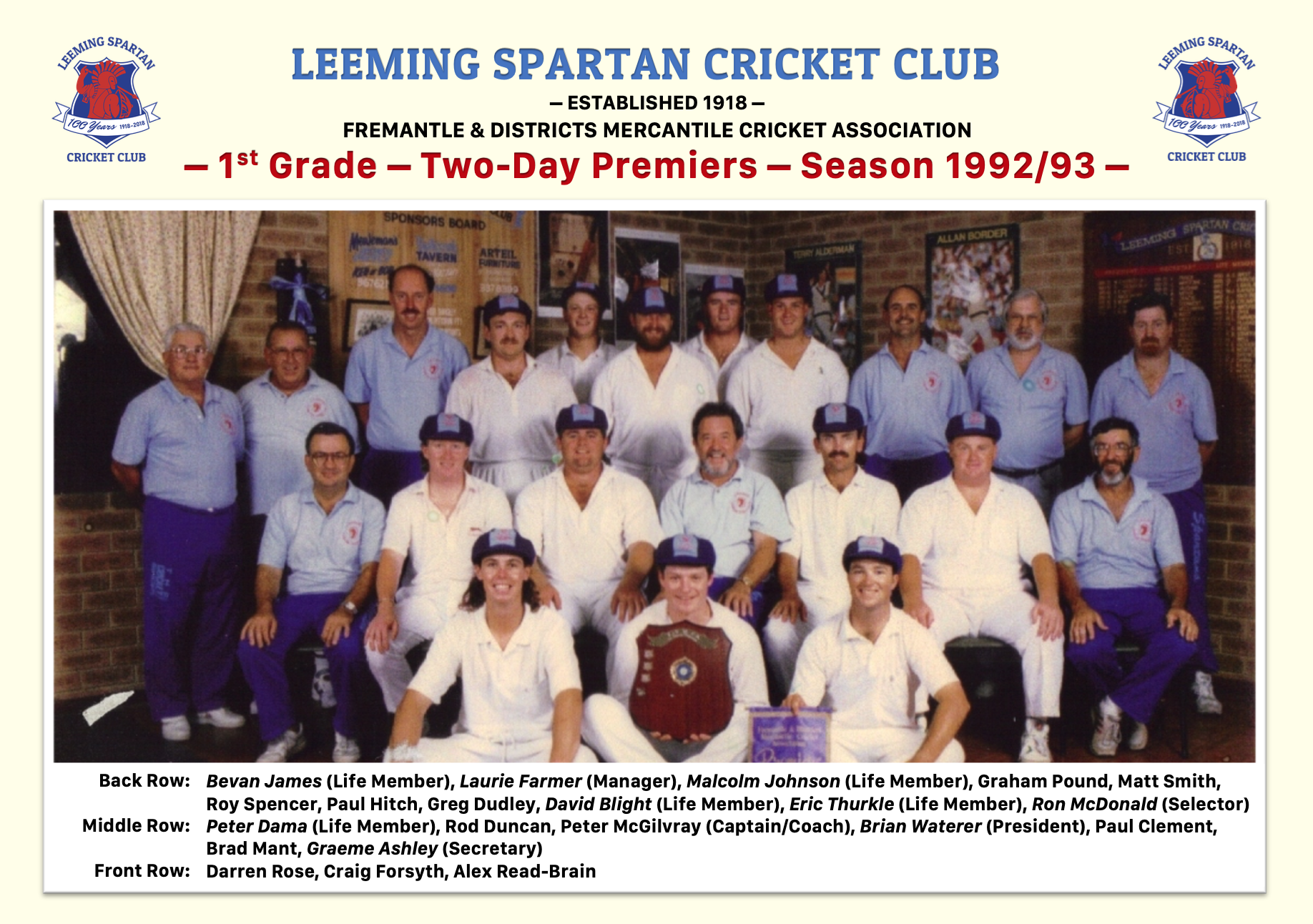 This was our fourth entry in The Spartan Scorecards Series, and with plenty of matches to list, we hope to bring you a new entry at least every week this off-season! Be sure to stay tuned, and consider subscribing to our Email Newsletter if you haven’t done so already – that way you’ll never miss an entry!