The Spartan Archives continue to pour out as we delve deeper into our more than one-hundred years of history with the finding of another Spartan Chronicle from years past – this one from November 2003!

Today we are looking at another Spartan Chronicle, with this one coming from 2003 – the same year we were given the keys to the brand new John Connell complex which we now proudly call the SpartanHQ!

Two of the earliest Spartan Chronicles were actually covered in our From The Archives series back in May 2017, when we looked at two from the mid-1960’s. You can check those out on our website by clicking here.

The Chronicles were initially just hand-written on paper and in the days before websites and social media, they served as the perfect way to keep members informed on all the latest happenings from the Spartan Cricket Club.

To keep our members informed before the dawn of the internet age, we used Spartan newsletters, which were handwritten and pinned on the notice board!

The Spartan Chronicle made another appearance in 2003 even though the website had already been up and running for two years, because it served as an easy way to get hard-copies to the Club members and provide them with a bit of light-reading. The Chronicle has always been a popular piece of Spartan history and was always accompanied by many jokes and interesting tidbits on its’ pages, which you will see below!

This Chronicle from 2003 marks the seventh entry in our From The Archives Series, which looks at the many interesting moments in the more than one-hundred years of Leeming Spartan history. With thousands of moments to look back on we are never going to be short of topics, but we also wanted to provide an in-depth account meaning we have heavily researched each topic. So whilst we aren’t always able to get the articles out as quickly or as often as we’d like, you can rest assured it is a case of quality over quantity as we do our best to re-tell the many incredible pieces of history from the Leeming Spartan Cricket Club!

The Chronicle In Question:

Check out the exact copy of the Leeming Spartan Cricket Club’s Chronicle from November 2003 – the 38th year since its inception in 1965. 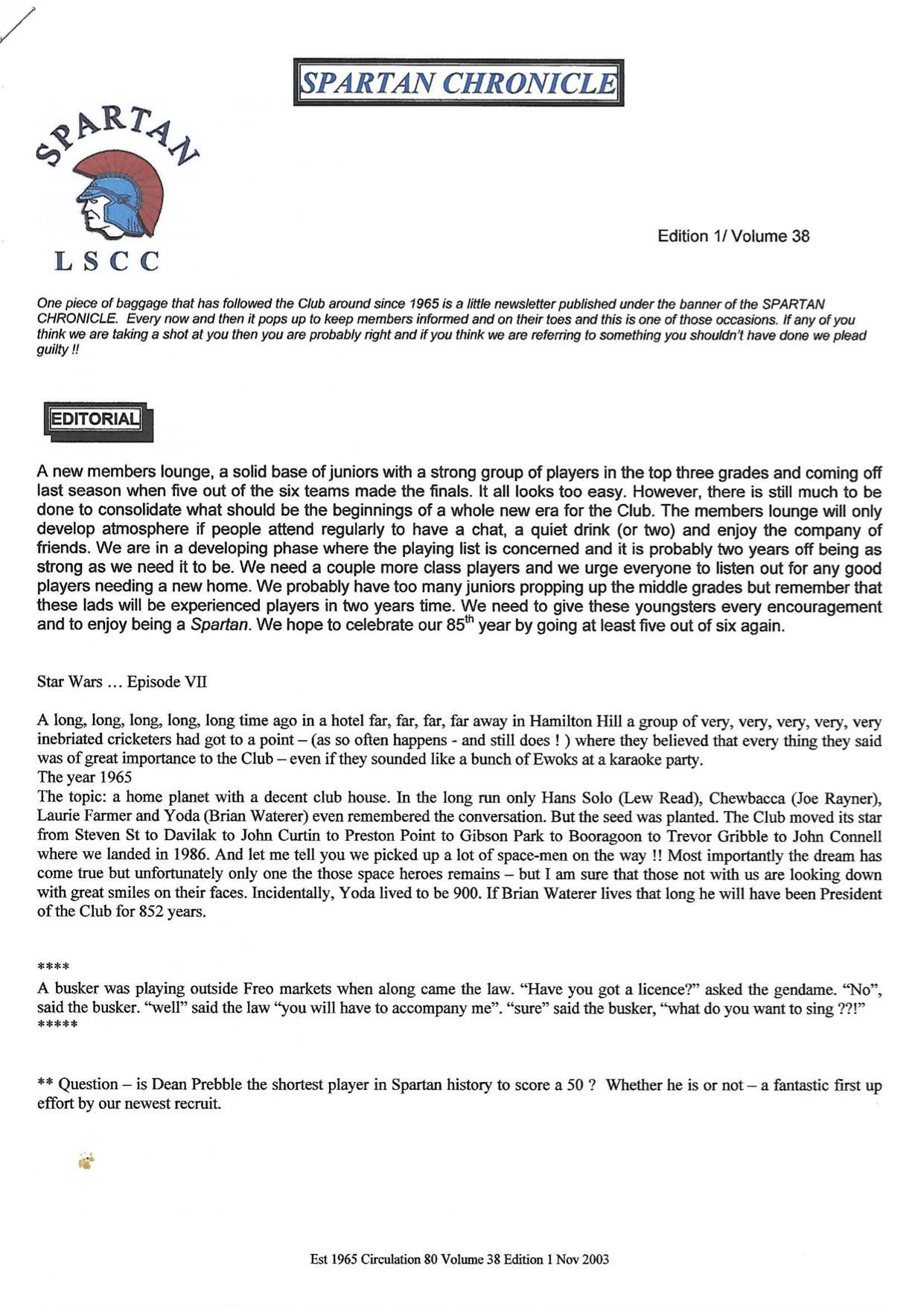 The Star Wars references were a timely connection to the second episode of the world-renowned prequel trilogy that was released a year earlier, with episode two, Attack of the Clones hitting cinemas in May of 2002.

Unfortunately there are no references in our Chronicle to the fan-favourite Jar Jar Binks, however if we had to pick someone today who best represents the gungan then it would have to be our coach Peter Waite!

2003 saw the biggest blockbuster in Spartan history come to fruition with the opening of our new clubrooms that still are the envy of the competition to this very day. It was built on the tireless work of Spartan legend Brian Waterer who took on the council almost single-handedly to get the best outcome for all Spartan players, and the Leeming Bowling Club, with whom we share the facility.

His comparison as Yoda in the Chronicle was apt in terms of work completed and standing within the community, and although he bares no visual similarity to the character, there would likely have been several times he was turning green during the long campaign to bring the new clubhouse to fruition!

Thankfully for everyone in the Leeming Spartan Cricket Club and Leeming community, Brian – our longest serving President – stuck to his guns and achieved what many considered almost impossible, and our fantastic clubroom was built.

It was also exciting to see that players from the Leeming Spartan Junior Cricket Club were being developed in the senior grades in 2003, something that continues to this day. The Leeming Spartan Cricket Club recently held a WinterT20 match with our half the players coming from the Under 17s, and this certainly proved to be a fantastic day for everyone involved and the families in attendance. It is something we will be working on furthering in the coming weeks and continues to be a core part of our reasons for wanting additional cricket nets at John Connell Reserve.

The Chronicle rounds out with an open question to the audience, asking if Spartan batsman Dean Prebble was the shortest player to score a fifty. It is certainly a question worth asking. Dean would later join CBC in 2005 and only played the one season at Spartans but accumulated a solid record in his eleven games here, scoring 204 runs at an average of 17 with his half-century, 60 to be precise, serving as his best effort for us with the bat. As to the question itself – surely that record has since been surpassed by former Vice President and Spartan Life Member Glenn Hack?

Photos Of Our Clubhouse Construction:

In our eighty-fifth year, the major highlight was undoubtedly the opening of our new clubhouse facility, a multi-million dollar megastructure orchestrated by Brian Waterer and the Melville City Council through many years of planning.

This new clubhouse was built parallel to our previous clubrooms at John Connell Reserve, an area we still utilise today for their upgraded change rooms.

Earlier in the year Brian had returned to the Presidency after Spartan legend Peter Read stepped down after two-years at the helm. Brian had been working tirelessly on the new clubrooms in the years past and it was fitting to have him open the clubrooms with the mayor of the time.

The new complex has panoramic views of the Club’s cricket ground, air conditioning, and a commerical grade kitchen and bar. The culmination of years of work by the combined Clubs through the LSA, it truly is a fantastic facility that is still the pick of the bunch more than a decade on.

During the opening ceremony, Mayor Jackson offered special praise to Leeming Spartan President Brian Waterer, who had been the driving force behind the establishment of the facility.

More information on this phase of our history can be found here. You can also check out the article written by former Secretary and Spartan Life Member Shannon Davies below, as it appeared on our website in 2003. 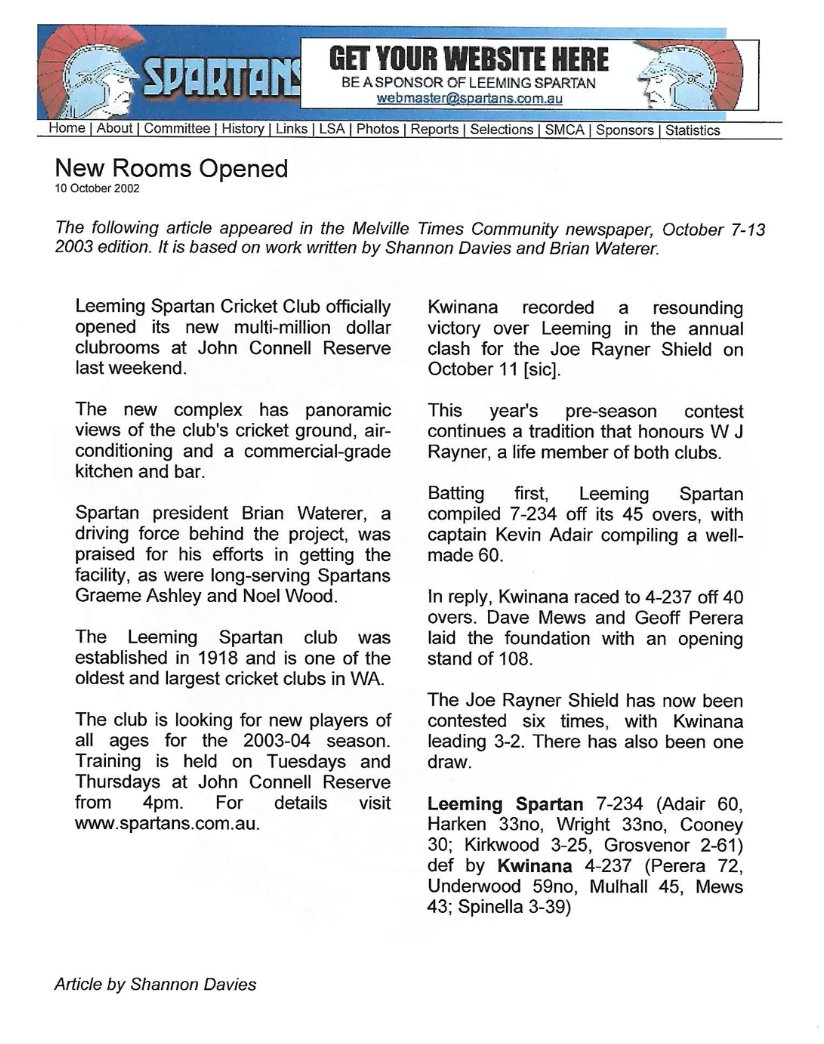 One of the First Grade highlights for the season included a magnificent 134no in a two-day fixture and a score of 98no in a one-day match – both against CBC – by Greg Dudley, who went on to make 540 runs for the season. Greg would later be part of our Team of the Century. Jason Cunningham also scored a century with 100 against Phoenix, making a total of 397 runs for the season. Captain Wayne Fontana was also a major contributor with 391 runs and 24 wickets, including 6/72 and Barry Harken and Shayne Hersey both took 20 wickets for the season.

Our Third Grade – captained by Life Member Graham Pound, the side cleaned up in the one-day variant and won the premiership. They were extremely strong all year, winning twelve of fourteen games and defeated Hilton Park emphatically in the one-day final. The scoreline for that match read Leeming Spartan 6/76 (Jason Hamling 32) defeated Hilton Park 75 (Peter McGilvray 3/13, Shannon Davies 3/14).

Team highlights for the season included four centuries – with one each to Craig Forsyth who scored 107, Danny Hambleton with 138, Skipper Graham Pound with 103, and Rob Simm with 112. Bowling honours were shared between Nigel Coppin and Shannon Davies, both with 23 wickets. Andrew Wragg took 21.

The Fifth Grade were another on-field highlight for the Leeming Spartan Cricket Club in the 2003/04 season, winning the two-day premiership under Dick Manning despite having to forfeit the first game of the summer! They finished the season on a roll and very easily won the Grand Final against Kenwick. They were unfortunately defeated by Thornlie in the one-day final.

Andrew Carruthers was the standout batsman this season, scoring one century (106*) and six scores of fifty or more to accumulate 725 runs in total for the season. Des Carruthers scored 359 runs and Ryan Noble with 333 were also good contributors with the bat this summer. Captain Dick Manning led the bowling with 35 wickets, supported by Kevin Wade with 32 and Ron Barber with 18. 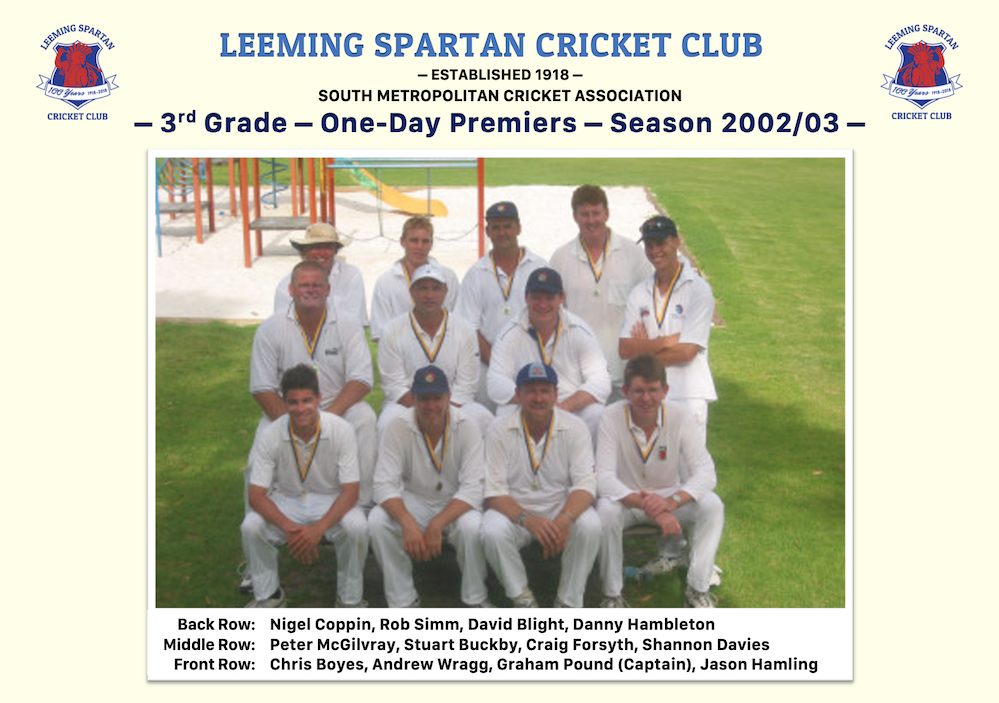 Editor’s Note: Unfortunately we do not have a Premiership Photo of the Fifth Grade premiership available, however if you happen to have a copy of one – please let us know and we would love to display it in the clubrooms.

This is the seventh edition of the Leeming Spartan Cricket Club’s “From The Archives” series, which looks at the history of the Spartans in-depth. We hope to bring you regular instalments this off-season for your perusal and encourage anyone to submit stories worth sharing.

Additionally, you may also wish to immortalise some of the memorabilia you may have at your disposal inside our incredible trophy cabinet at our clubhouse, with special thank you to those who have already donated priceless pieces! Should anyone wish to aid with the development of the series, please feel free to Email me!