We’re now into our third edition in our “From The Spartan Archives” series, and today, we’re looking at how the Club conveyed its messages before the internet age!

Long before the introduction of our website, the Club used frequent newsletters and chronicles to keep members in the know about our upcoming events. Spartan Legend Graeme Ashley has very kindly supplied us with some fantastic chronicles from the Club’s extensive history, which we detail below, including two from 1965/66!

The other comes from the 1986 season, and provides a great follow on from our second edition, which looked at the 1985 season and our move to John Connell Reserve. All three editions are available for download as a PDF file at the end of the article.

To keep our members informed before the dawn of the internet age, we used Spartan newsletters, which were handwritten and pinned on the notice board!

The fifth edition of the 1966 Spartan chronicle mentions the upcoming Christmas function at the White Gum Valley Scouts hall, just off Stephen Street, where “parents are asked to purchase a present to the value of 50 cents”. Notably, the fourteenth of February 1966 – ten months earlier – saw the introduction of the Australian dollar over the pound sterling.

Pictured below is a scanned copy of the original 1966 fifth edition of the Spartan Chronicle: It is fantastic to read through the upcoming milestones for our Spartans, many of whom have featured on our leading aggregates for over half a century.

For example, Lew Read, who at the time was 73 runs shy of reaching 1000 runs for the Spartans ended up accumulating 5138 in total, placing him at nineteenth on our list of leading run scorers.

The Reads feature prominently in this particular edition, with sincere thanks given to Lydia for her help in staging a social function.

A line thanking Lydia Read for her help in organising a function from the 1966 Chronicle.

Additionally, George Pluske was 29 wickets away from hitting 500, later becoming the first Spartan to reach the six-hundred wicket mark.

Coincidentally, the man who would later take the record for the most wickets for the Club, Wacka James, had recently begun paving his name in the Club’s record books, the youngster taking three five wicket hauls during the season.

As to how our two sides ended up faring that season, check out this below from our history pages;

For the First Grade, this was one of their least successful seasons during the sixties and they finished in fourth place.

The Seconds won their first major trophy and naturally enough it was a Minor Premiership!

There were very few outstanding performances in the top grade, but the seconds had several

Going back a few weeks to the second edition of chronicles from the 1966/67 season, it sees mention of a new committee, headed once again by Jack Knox-Peden, and notes that “if you are not happy with anything the club is doing or if you have a suggestion to make please tell one of the above gentlemen and something will be done about it!” 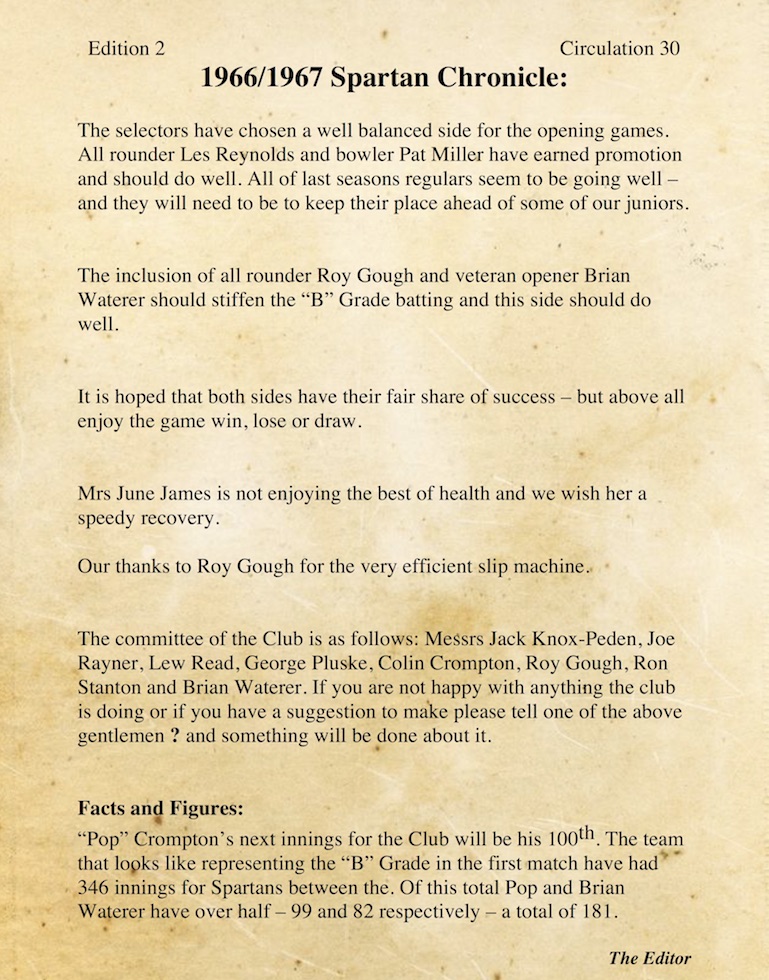 Unfortunately, the original version of this edition was badly damaged through time and had to be reconstructed. The version pictured is written exactly as the original, with one small illegible word replaced with a question mark.

Thanks once more to Graeme for repairing this great piece of Club history!

The final chronicle that we’re looking at today (pictured below) takes us forward in time by twenty years to the 1986/87 season, as we moved to our current location on John Connell Reserve.

The brand new clubhouse – the brick one with change rooms and not the multi-million dollar glass one we utilise today – is “superb and the function room is sure to provide a marvellous setting for many happy and relaxing hours for club members and their families.”

The newsletter was very welcoming to new players, and provided a snippet detailing some history of the Club;

For the new comer, Spartans have had a First Grade side since 1918, and in the same time some 68 seasons the side has made the four on 31 occasions. The second grade side have competed for 26 seasons with 16 in the four.

There was a third grade side between 1973-84 which made the finals on 5 occasions (twice as Premiers). The fourths have played 9 seasons for 4 times in the four (also two Premierships) and the fifths have made the finals once in their five seasons and the sixth side was entered for the first time in 1985-86.

Some of the Spartan new comers are mentioned by name, including none other than one of our current One-Day Captains in Tim Allan! Selection issues were still a common occurrence back in 1986, and that year the committee devised a new approach to settling any disputes, with a three man body formed to aid with the selection process. The inaugural members were Des Deering, Tom Hegarty and Steve Carter.

The Club has always had second to none statistics and record keeping, and this has featured prominently in all editions of our Spartan chronicles, and they continue to be visible today on our website.

Unlike other editions however (this being an early season one and was commonly read by new players), there was also the inclusion of dot points providing a brief history lesson on the Spartan Club, which was as follows (some a little more positive than others!);

Whilst the quality of the chronicle was unbeatable, sadly for our first and second grades, this was not the case. Both grades finished dead last, just the second time this had ever happened, the first being in 1934.

The Fourths finished in seventh spot, whilst the Fifths had a great season reaching the Grand Final where they ultimately went down to Cockburn. The Sixths too played very well to just miss the four by a mere 1.50 points. The Colts were eliminated in the first round.

Additionally, the Club had been known as the Bullcreek Spartan Cricket Club since 1981, due to its housing at the Parry Avenue (Trevor Gribble) sporting complex, but with the completion of the aforementioned John Connell clubrooms, the following season saw the birth of the Leeming Spartan Cricket Club.

The following season saw the Spartans move to the John Connell complex, and marked yet another chapter in the Club’s history – one we are still enjoying today.

In the more than 30 years that have followed since the publication of the 1986 edition, we can still call the Trevor Gribble Reserve home – it now serves as our second home ground for our thirds and fourths.

The chronicles were the last regular holdable piece of literature from the Leeming Spartan Cricket Club, with our website having replaced the way we communicate with our members.

It’s quite funny to think that the tools we used to document our past in 1986, have since become their own entries in our history chapters.

If one thing can be taken from all of this, it’s that in our 99 year history, the Club has certainly adapted itself, and has always been ahead of the times when it comes to implementing new ways to connect. These three Spartan Chronicles detail an extraordinary period in Spartan history, detailing the lead up into our position today as the Leeming Spartan Cricket Club.

An enormous thank you to Graeme Ashley for supplying copies of these fantastic chronicles, the 1966 and 1986 editions are certainly priceless pieces of Spartan history!

This is the third instalment in our “From The Spartan Archives” series, which we hope to bring to you at least once a week during the off season. Should anyone wish to aid with the development of the series, please feel free to Email me!