The Leeming Spartan Cricket Club is delighted to be able to officially confirm an incredible contribution by State Labor, who if re-elected, will deliver $625,000.00 towards our new change rooms and nets at John Connell Reserve.

This enormous promise will go a long way to making the John Connell Reserve Development Project a reality, which up until now has essentially been stifled by the City of Melville’s administrative officers and their endless delays and reluctance to move on the project. Like in anything, money talks, and this announcement is WA Labor’s commitment to the Leeming Spartan Cricket Club and our more than 300 members to ensure the project is completed. The State Government and Opposition can both see the importance of the John Connell Reserve Development Project, so it is bitterly disappointing that the City of Melville are incapable of doing the same, instead preferring to continue to delay and string us along in the hopes that we will go away.

That is certainly not to be the case however, and the tireless work that has gone on behind the scenes unbeknownst to them in order to secure this incredible commitment from WA Premier Mark McGowan and his team is clear evidence of this.

If WA Labor is re-elected, then this commitment will be the single biggest contribution received in Leeming Spartan Cricket Club history, and it could not have come at a better time as we desperately try to secure the best possible future for the Club and our members.

Specifically, the money received will go towards upgrading the change rooms and cricket nets as an initial priority – both of which are crucial components of the Development Project. The nets themselves for instance are so decrepit and aged that they lack basic safety features required for any new nets built today. Additionally, their position in the northern-east side of John Connell Reserve makes a second oval currently impossible, which is also a core part of our plans towards securing a better future for the Leeming Spartan Cricket Club. As such, we wish to relocate the nets back towards the car park, making them far more accessible, will allow for two ovals to be built at John Connell and additionally have the required new features and safety enhancements.

The commitment from the State Government will also go a long way towards securing our upgraded change rooms, something that we are in dire need of.

Our Local Member and fellow Spartan, Yaz Mubarakai MLA (the member for Jandakot) has worked tirelessly over the past four years with us and furthermore has been instrumental in getting this project commenced, and certainly would feel our frustrations in trying to get the City of Melville – the local shire where the Club is located – on-side. Yaz has worked closely on the John Connell Reserve Development Project with Labor’s State Candidate for the seat of Riverton, Dr. Jags Krishnan.

The Leeming Spartan Cricket Club will be moving into this local electorate in what is the seat of Riverton, and out of Yaz’s (Jandakot) at the 2021 State Election as part of the regular redistributions that occur. This means Dr. Jags is a genuine chance to be the voice in Parliament representing the Leeming Spartan Cricket Club, and to have his support throughout not only the election campaign but in the months prior – such as by attending regular meetings regarding John Connell Reserve, regularly coming down to the clubhouse and only ever being a phone call away – means we are truly lucky and grateful for his time, energy and effort.

In addition to this enormous contribution towards our John Connell Reserve Development Project, Dr. Jags also announced recently that he would be using $30,000.00 of his allotted campaign spending money from the party solely on the Leeming Spartan Cricket Club, to allow us to purchase two sight screens and a state-of-the-art electronic scoreboard. You can learn more about this incredible offer right here.

In relation to the enormous contribution on offer from the Government, it will certainly prove of such significant importance towards getting this project up and running.

In our recent meeting with the City of Melville that was attended by Yaz, Dr. Jags and Kate Doust – who is President of the Legislative Council in WA, it was noted by Council the significance of this fantastic contribution and how it will go a long way to making the project possible.

Disappointingly though a counter-argument was raised by the City as the project would require reallocating their staff members towards the development, but given there is at least $625,000.00 on the table from external sources outside the council, it would be hugely disappointing for the entire community if this was not to come to fruition in a timely manner – particularly given this is something that has been on the cards for over 25 years.

Ultimately the three clubs – the Leeming Spartan Cricket Club, the Leeming Strikers Soccer Club and the Leeming Bowls Club have all worked incredibly hard to get the project to where it is, and to have the backing of WA Labor through Yaz and Dr. Jags is a terrific outcome.

It was also noted that the Club would then apply for a CSRFF Grant, which is the Community Sporting and Recreation Facilities Fund – a state government allowance towards major projects including what we are proposing and are desperately needing at John Connell Reserve.

This would enable us to cover the remainder of the funds through the State Government grant, given the fact that the CSRFF is held annually. It is however a lot of work and frustratingly needs to go through the local government (City of Melville) first who prioritise the applications (including their own as they too are eligible to apply for it) before it moves on to the next phase and into consideration by the State.

This is of course another roadblock we are seeking to try overcome and if re-elected, we will be sure to continue working with Yaz in making this happen given it is a significant piece in the push for two ovals at John Connell Reserve.

In the shorter-term where we currently stand is that the funds given by WA Labor if re-elected to the Leeming Spartan Cricket Club will prove crucial in getting the change rooms and cricket net upgrades underway. We can’t unfortunately set a proper date, however the City of Melville has hinted that their budget in the 2021/22 or 2022/23 years may allow for work to begin given they will have a large portion fo the cost covered by the State Government.

The Leeming Spartan Cricket Club is delighted to have the support of our Local Member Yaz Mubarakai and the Labor Candidate for Riverton, Dr. Jags not just at the 2021 WA State Election but for the eighteen months prior as we have worked closely with them on this enormous project at John Connell Reserve. To have this incredible financial commitment from them is something we extremely appreciate given how important it will be for the future of the Spartans. You can read the announcement in full below. 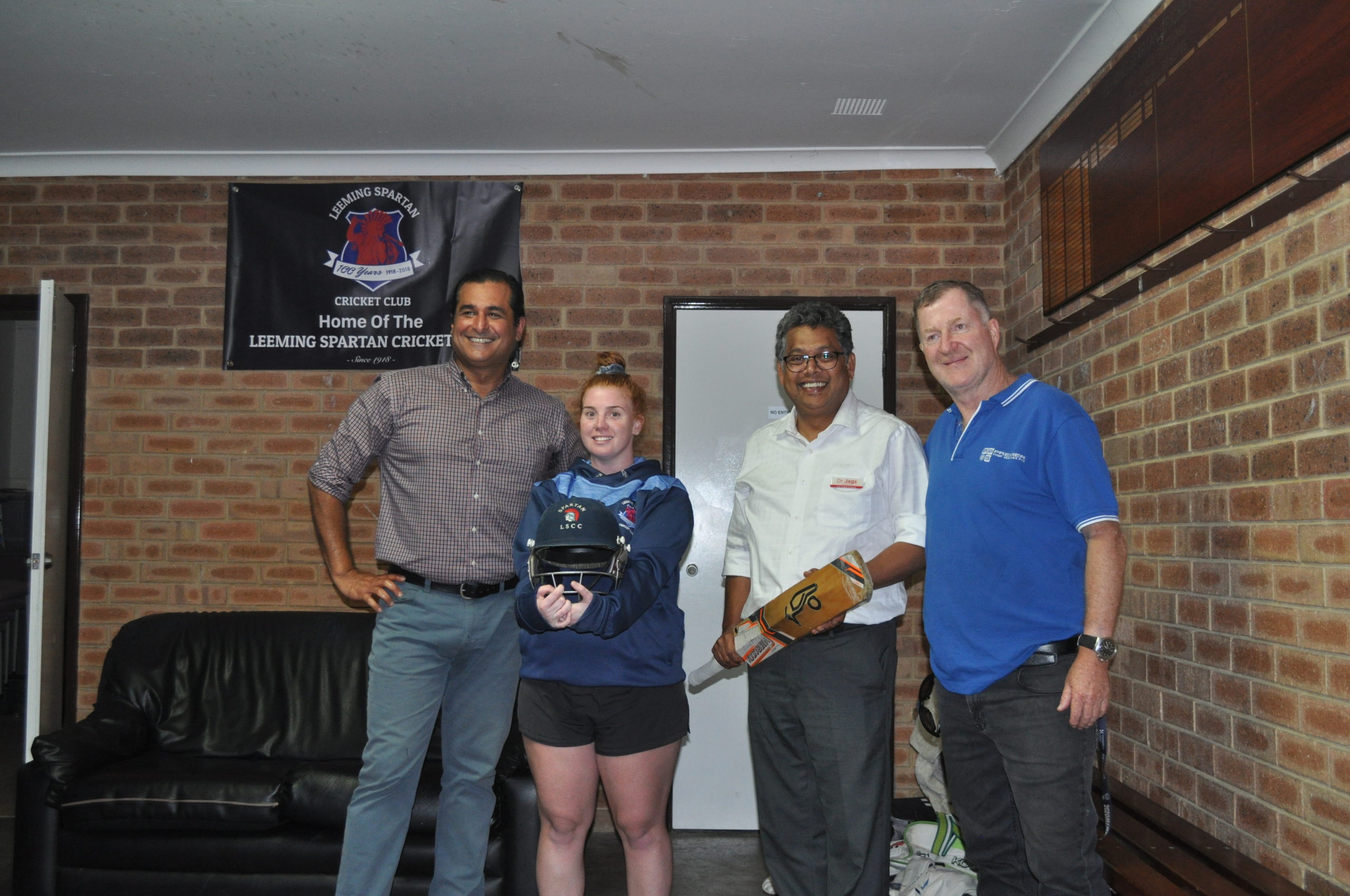 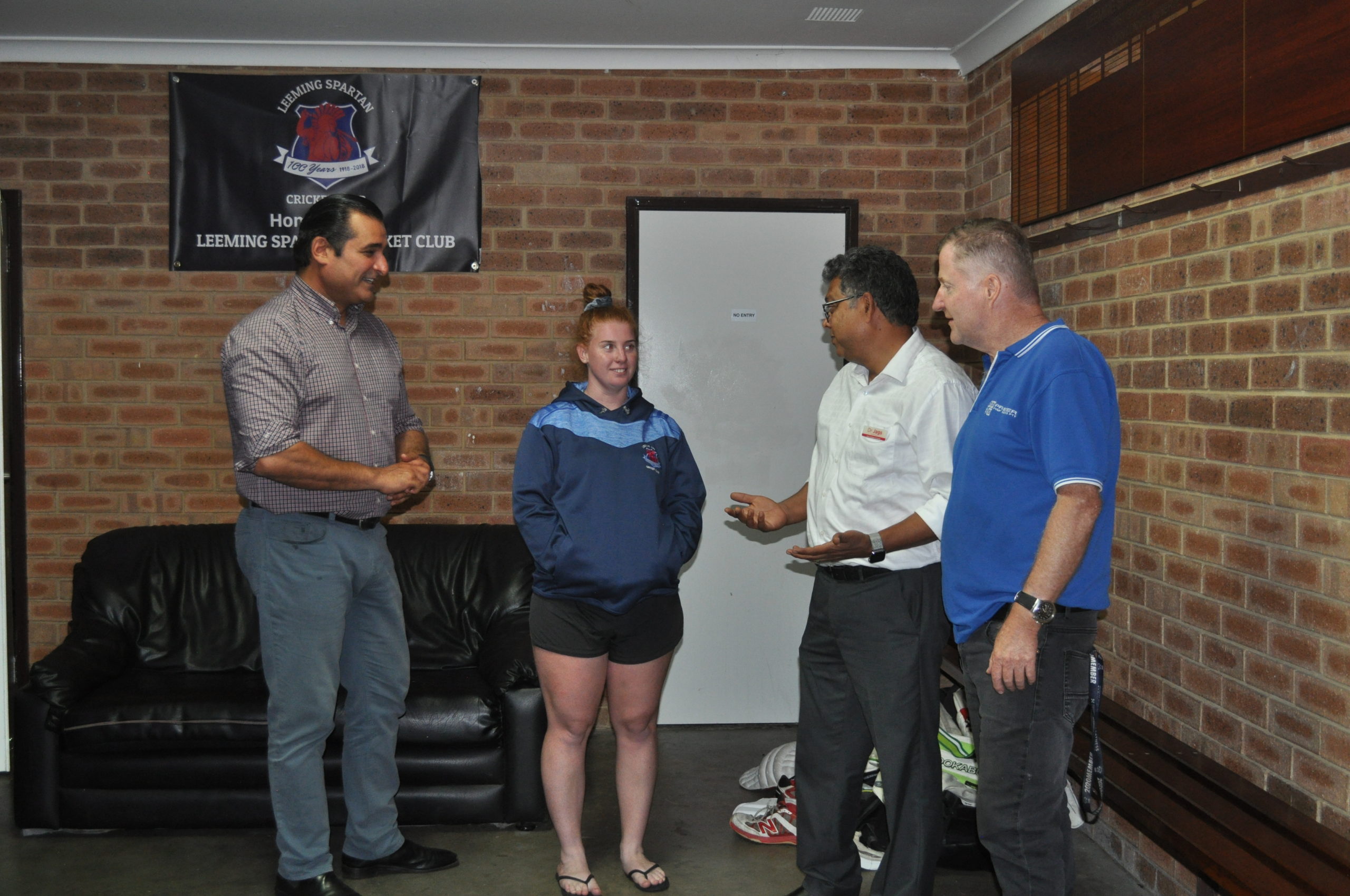 Left To Right: Yaz Mubarakai MLA, Spartan Carly Peddie, Labor Candidate for Riverton Dr. Jags Krishnan and Spartan Life Member Ron McDonald discuss the change rooms at John Connell Reserve and how they are in desperate need of an upgrade. WA Labor has committed $625,000.00 towards making this possible.

Yaz Mubarakai and the Mark McGowan Labor will deliver $12,125,000 for sports and recreation in Jandakot if re-elected as it was announced today.

The Canning Vale Regional Sporting Complex will take a major step forward, with a re-elected McGowan Labor Government to provide $10 million to progress the proposal. The CVRSC will meet the increasing demand for sporting facilities in the rapidly growing south eastern suburbs.

A re-elected McGowan Labor Government will invest $625,000 to upgrade the John Connell Sporting Reserve in Leeming, modernising change rooms to cater for the women and girl’s cricket and soccer teams.