A career-best haul of 7/30 by our newest Read-Waterer Club Champion Chad Forsyth has enabled the Leeming Spartan Cricket Club to power through its First Grade Semi-Final, defeating Cockburn by ten wickets at John Connell Reserve.

The game had been scheduled for two days of play on both Saturday and Sunday, but Chad’s epic haul destroyed the Cockburn batting order and meant the opposition were rolled for just 47 in less than 30 overs.

Chad claimed five of the top six wickets to annihilate Cockburn’s batting early on the first day’s play. The first wicket of the day came in disastrous fashion for Cockburn following a run out in the opening over that saw captain James Matkovich on his way for a diamond duck. The man with the golden arm was Chad’s brother Jake, but from then on it was one-way Forsyth as Chad took the next five wickets of the game.

By the end of the innings he had claimed seven, in what was one of the best individual performances in a final at the top level. Josh Foster also chipped in with two wickets of his own in claiming a very impressive 2/4 from 3 overs.

Captain Paul Kalleske finished with five catches behind the stumps in another awesome individual performance, but of course it was Chad Forsyth who was the star of the show with this scintillating effort with the new ball. Cockburn had been bowled out for just 47 with Jake Goncalves top scoring with just 14.

The score of 47 was also just shy of the lowest score ever against the Spartans since World War Two in First Grade – that ‘record’ still being held by Kardinya Lakes who managed 41 back in 1995/96.

Incredibly, Chad has now taken five wickets or more in two of our past three First Grade finals matches – including his very memorable 5/17 against Phoenix in the First Grade Grand Final in 2018/19 – a game which saw that opposition bowled out for 57.

In yesterday’s match, with just 47 on the board, it was then left to our opening batsmen in Jake Forsyth and Kalleske to remove any possibility of the unthinkable happening, and they did so with ease – smashing the ball to all parts and playing some incredibly fine shots throughout to see us past the total without the loss of a wicket.

Chad Forsyth was the star of the show – claiming 7/30 including five of the top six wickets to demolish the Cockburn top order!

That included a sublime drive through the point region by captain Kalleske early, which essentially set the tone for our batting innings and immediately made it known there would be no trouble chasing down the meagre total.

The opening stand was finally broken with the score on 62 when Jake was trapped LBW for 30, while Kalleske meanwhile remained on 26 not out. It was at this point that the opposing captain agreed there was not much likelihood of a different result being forced in the second innings and the two teams shook hands.

With that, they had agreed to call it a day and the match was officially the Leeming Spartan Cricket Club’s! This means the Spartans had for the second time in three finals matches knocked over the opposition in just one day of play, and this latest effort means we move into the grand final next weekend!

The Grand Final will be played against either CBC or SJ Blues but will be on our home turf at John Connell Reserve. Currently in the other First Grade semi-final, CBC are in a very strong position after posting a very impressive 7/268 on the back of another batting masterclass from three-time Jim McKenna champion Andrew Galbraith who made 131. SJ Blues have it up against them today but are certainly capable of chasing down this total.

Should CBC win though, it does set up the real possibility of a 2019/20 Grand Final rematch in First Grade – something that never actually occurred as the games were all abandoned due to COVID-19. That meant that heading into the 2020/21 season both the Leeming Spartan Cricket Club and CBC Cricket Club were joint premiers in First Grade, with the Spartans achieving back-to-back premierships in the process for the first time in our history.

Regardless of what happens in today’s other semi-final, one thing is certain – the Leeming Spartan Cricket Club are playing in their fifth consecutive First Grade Grand Final! Be sure to head down to John Connell Reserve next weekend from 1:00pm to watch the action unfold!

The incredible victory inside just one day threw a bit of a spanner in the works for our pre-planned Sponsors and Life Members Day – who were expected to be treated to the afternoon action on day 2. Despite the early finish, fear not because the day is still going ahead albeit with a different main event on show. The Leeming Spartan Cricket Club clubhouse will be open today from 2:00pm and we strongly encourage everyone to make it down. You can learn more about the event here.

We wouldn’t have it any other way though, and Chad’s epic performance was truly something to be seen. It all bodes well for a massive Grand Final next weekend, and no doubt he will have an enormous part to play in the game.

It was a sensational victory for the Leeming Spartan Cricket Club and on the back of star Chad Forsyth’s 7/30 it has certainly been an incredible season for the Spartans who have all performed exceptionally well throughout the year. The way we bounced back from last weekend’s shock loss – our solitary loss of the season – could not have been any more perfect, and here’s hoping it all continues for at least one more weekend! 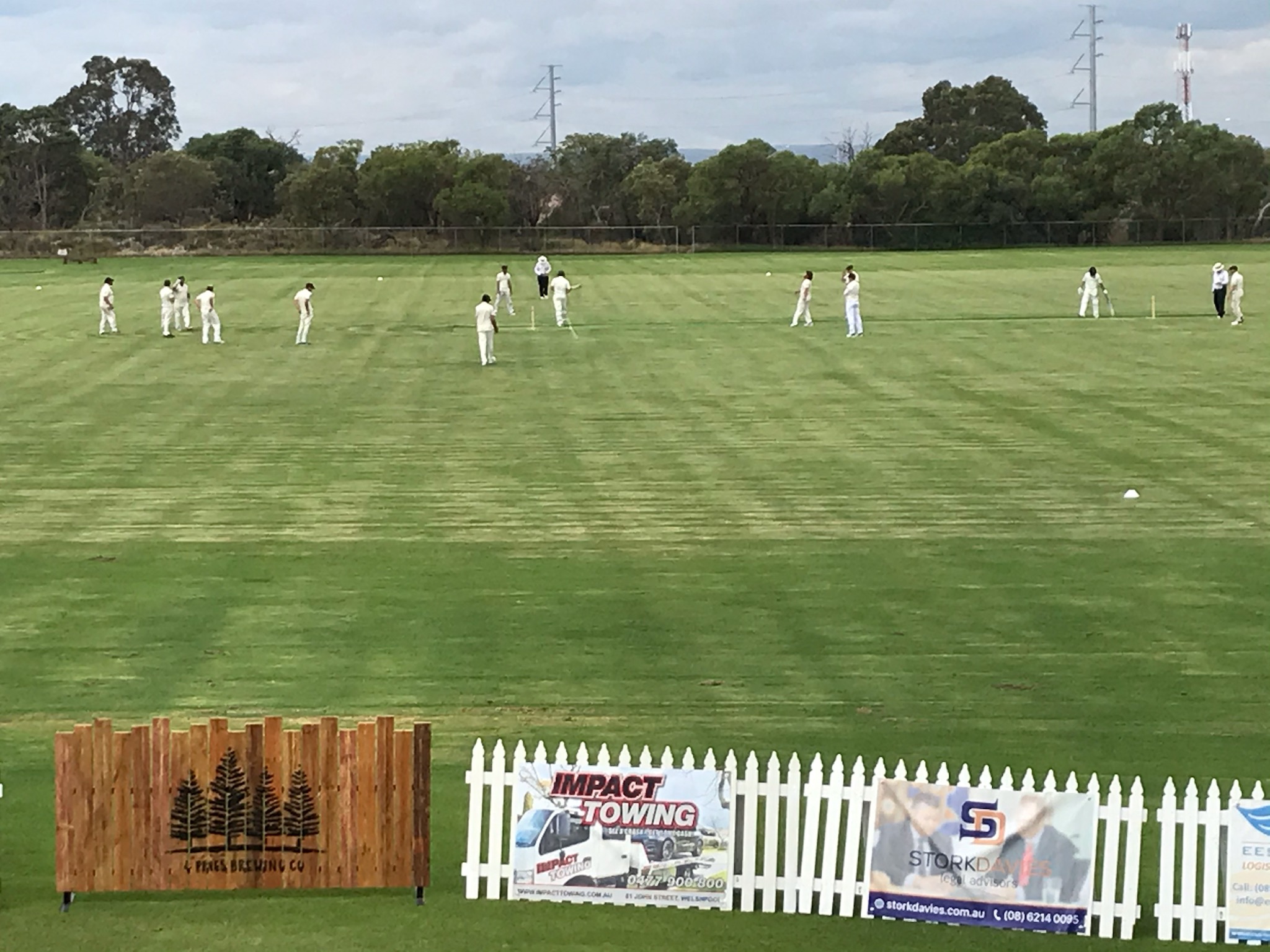 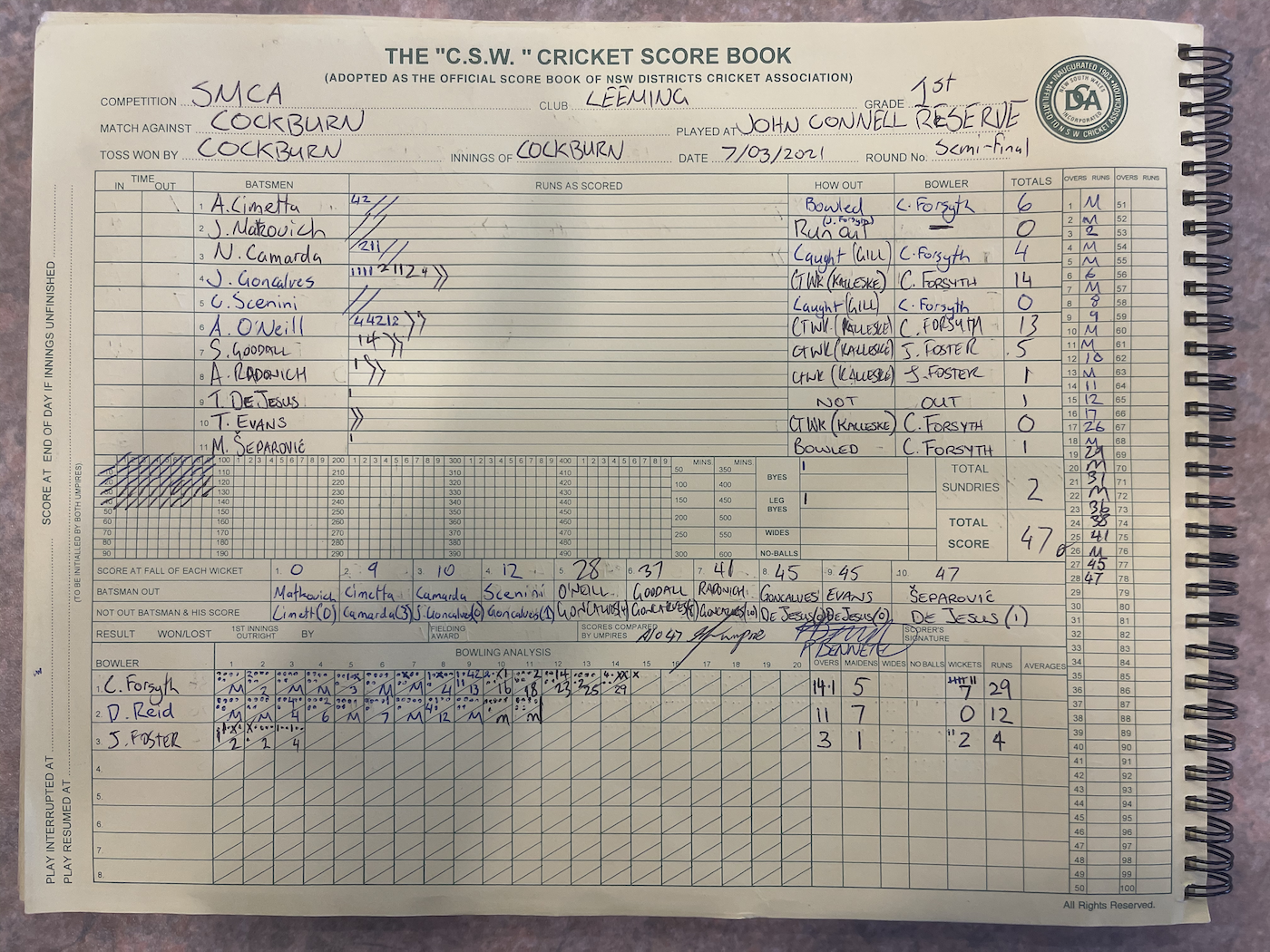 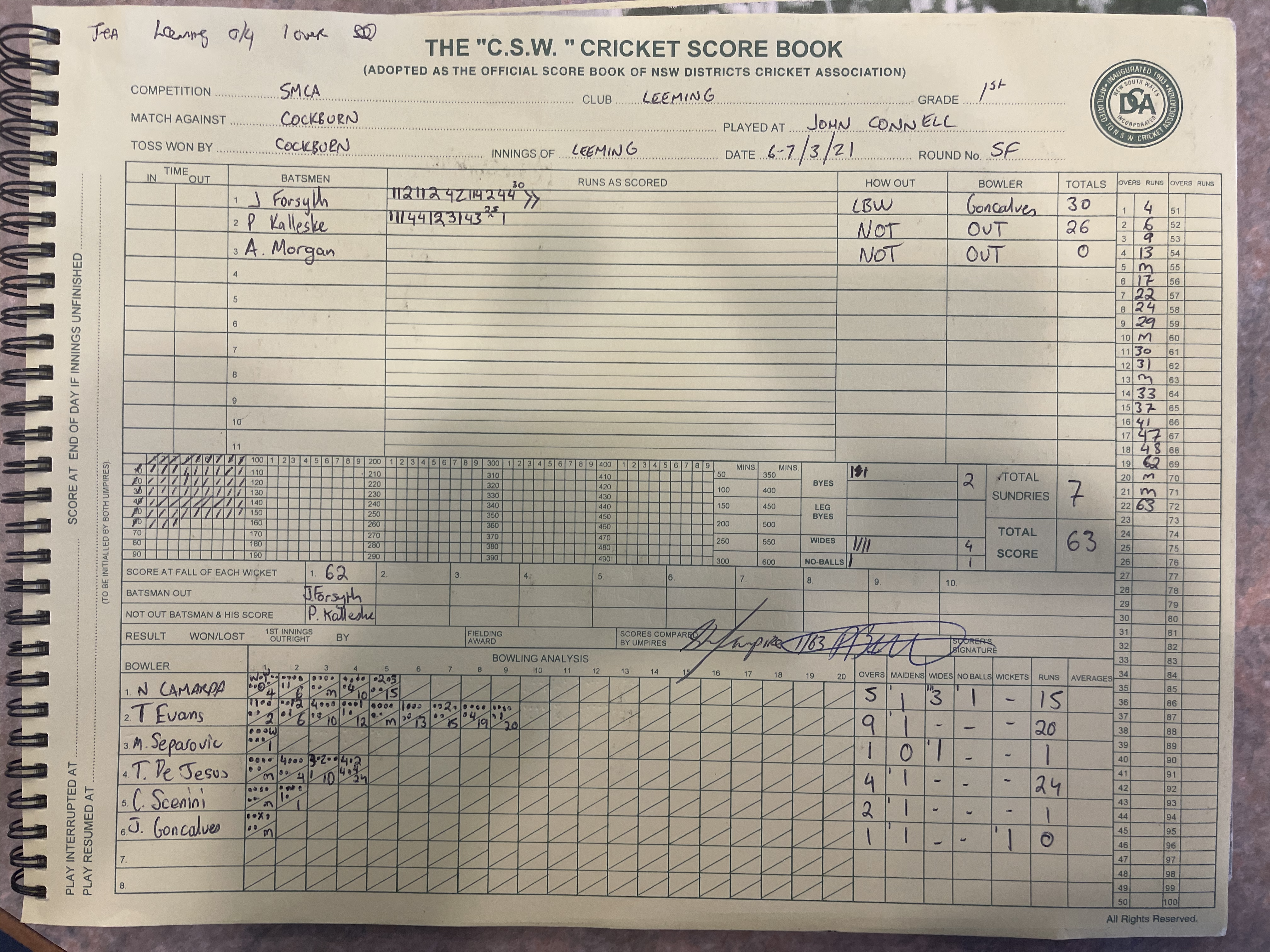 The official scorebook from yesterday’s play. Click/tap for a larger version. 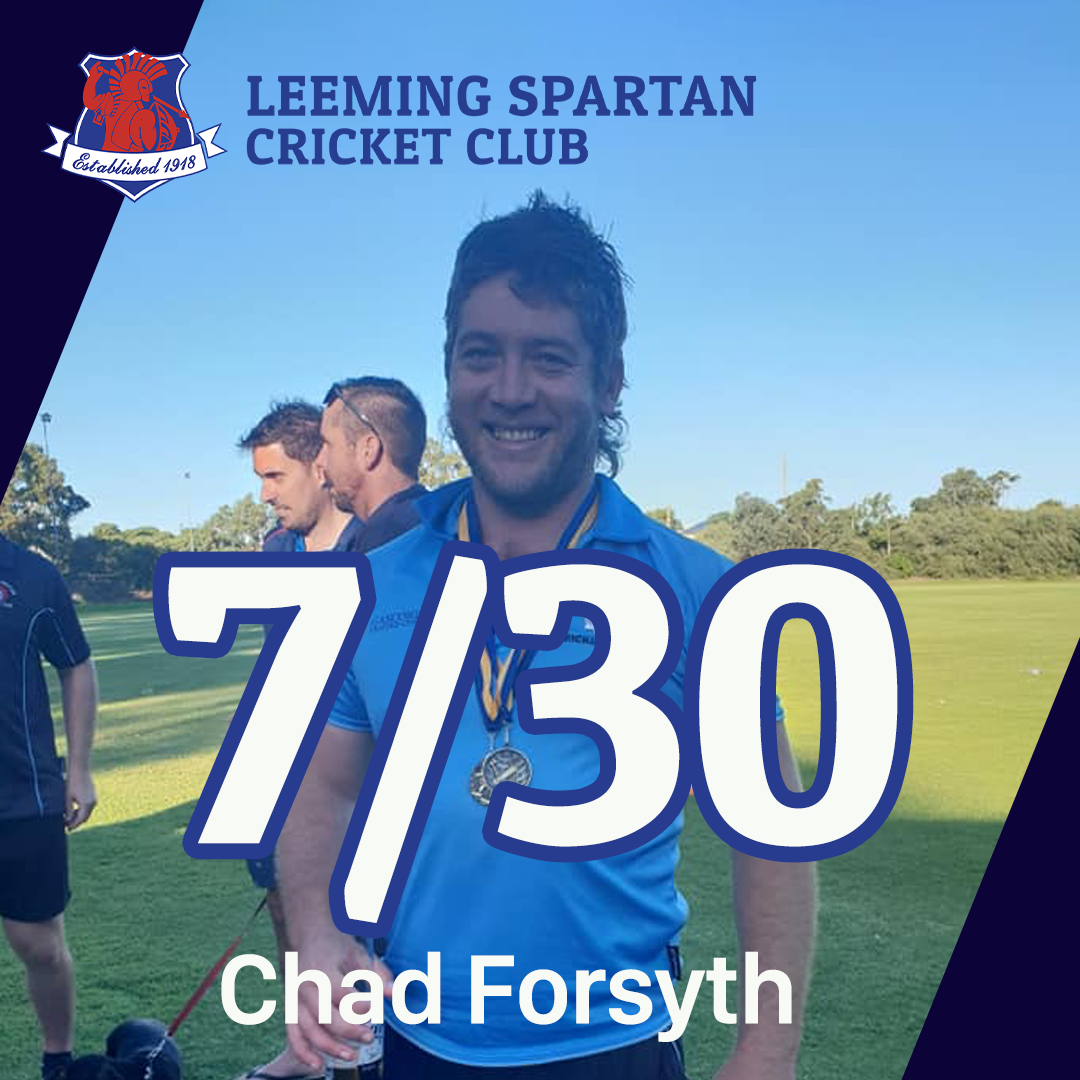