After a short break, we’re excited to bring you the eighth edition of the Leeming Spartan’s Scorecard Series with a ripper from a terrific year – 1996 – as we look into the tale of the incredible first-innings finish in our fourth grade.

This eighth edition of The Spartan Scorecard Series is also one of firsts in that this particular match was actually featured in the local newspaper due to how remarkable it was. Specifically, the match looks at a game the Spartan Fourth Grade played against Cockburn in the 1995/96 season.

We were playing off at the infamous Peter Ellis Stadium – a home ground of ours in the City of Melville that is so totally devoid of any facilities or shelter (and has hardly seen any improvement in the 25 years since) that the opposition would be forgiven for simply driving past. Nevertheless, the two teams went into battle in the eleventh round of the season.

The game took place on the 20th of January 1996 and was a limited overs one-day affair between the two sides in the Fremantle & Districts Mercantile Cricket Association in what proved to be the final season in that competition as we would go on to join the South Metropolitan Cricket Association in 1998. After 67 years in the F&DMCA there had been countless memories created, and although the competition by that stage had weakened significantly in the number of participating clubs, the old faithful was still able to produce one more stellar performance that will live long in Spartan folklore.

A remarkable finish to Cockburn’s first innings in 1996 is the topic of this week’s Spartan Scorecard Series, and it really was something to behold.

The Leeming Spartan Cricket Club was bowling first and ultimately were set a total of 148 to win from 40-overs, which was still quite a competitive score. We were able to chase the target down comfortably and won by four wickets. At the time the sides were only separated by two places on the ladder, so this also proved to be a crucial victory for the Spartans heading into the finals series.

The innings, as you’ll see below, was one that started well for the home side but quickly turned in our favour. So without further ado, let’s get into it! 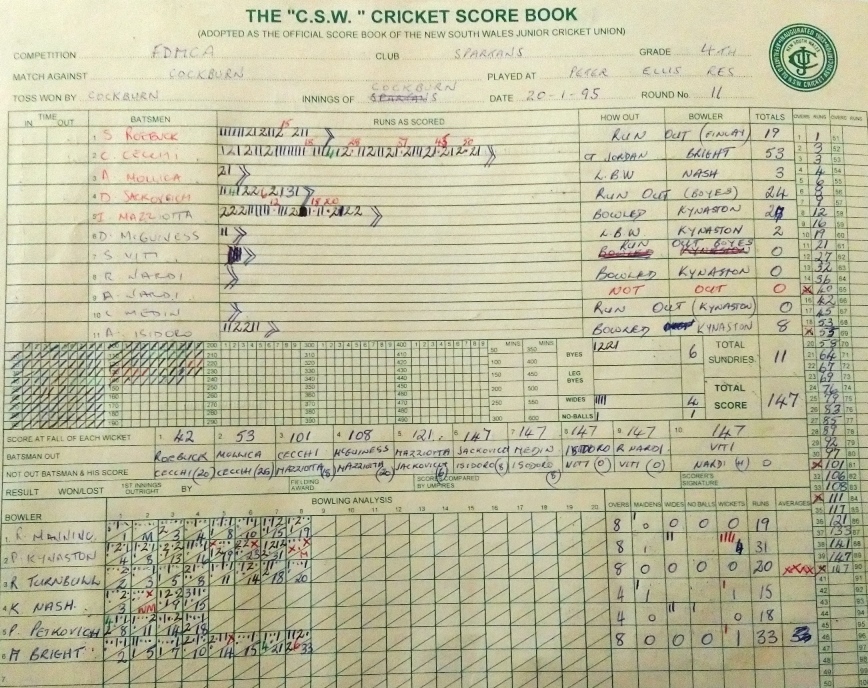 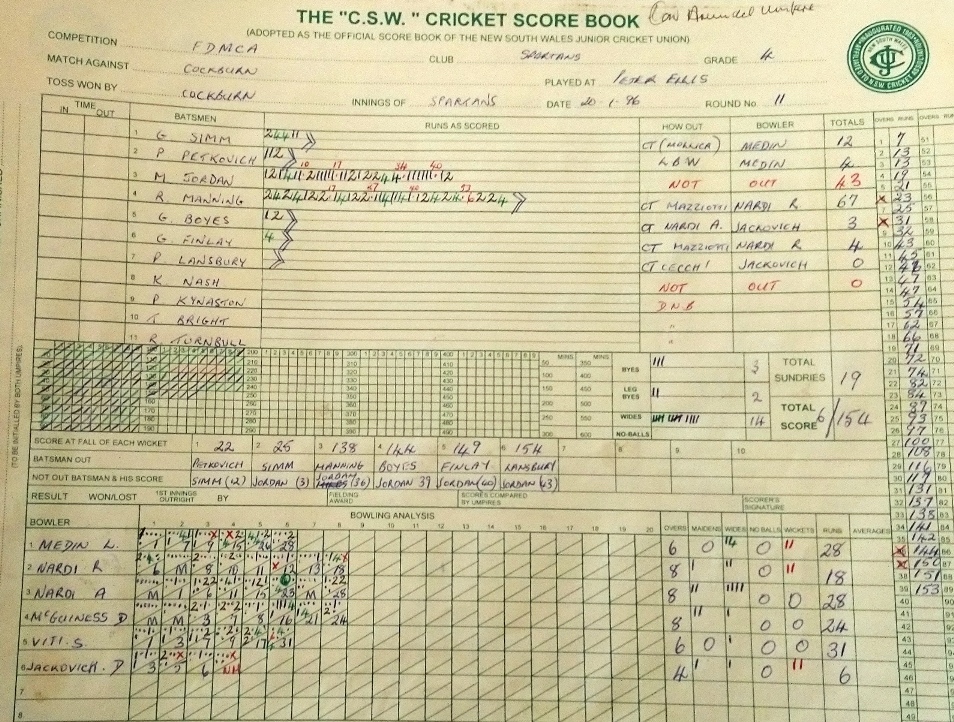 Cockburn won the toss and immediately elected to bat on what would most likely not have been considered a stellar pitch at Peter Ellis. Many Spartans will know the ground is the butt of many jokes for its lacklustre offerings despite its close proximity to our multi-million dollar clubhouse on John Connell Reserve.

Nevertheless, the game had begun, and the Cavaliers quickly got off to a good start, reaching 42 without loss in sixteen overs. It was a run-out that proved the difference and got the Spartans back into the game with Gareth Finlay throwing down the stumps.

One for 42 quickly became 2/53 but then Cockburn again steadied and reached 101 when the third wicket fell. This was the big one as their opening bat had scored a fine 53 and was looking the difference before he fell.

The innings progressed evenly, with runs scored and wickets taken respectively as we went into the thirty-sixth over with the score 5/121. Cockburn would have been looking for a big finish from the last few overs and with wickets in hand this was certainly an achievable goal.

They had managed to get themselves to 5/147 with just six balls to go and it was left to Spartan Peter Kynaston to bowl the final over. This proved to be quite the masterstroke as Kynaston and wicket-keeper Gary Boyes combined in style to throw a spanner in the works and abruptly end the opposition’s innings.

Kynaston’s first ball of the 40th over was missed by Cockburn’s batsman and went through to the keeper Boyes. In a similar style of play that is common today with the advent of Twenty20 cricket, the batsman ran and tried to sneak a bye despite not laying bat on ball. This proved to be unwise as Boyesy threw down the stumps at the striker’s end and ran the number four out for 24.

The second ball of the over produced another swing and a miss, although they were wiser the second time around and stayed in their crease. The third time was the charm however as the same result was produced – a swing and a miss – and again the sneaky single was attempted and again to no avail. Boyesy’s throw missed the target this time (the stumps at the striker’s end), but the ball was quickly collected by Kynaston at the bowler’s end and he completed the run out.

Incredibly, the next two deliveries produced two wickets as both batsmen were clean bowled (a nice change of pace from the start of the over) and Kynaston was now on a hat-trick.

The field came in despite the fact it was late in the innings and bit hits were on the agenda, with everyone believing they were a real chance of witnessing a hat-trick.

The final ball however was not going to be a hat-trick to Kynaston, but it was instead the next best thing as in a shock to nobody at this stage, the number eleven swung and missed and was also run out. A “team hat-trick” had been taken and the opposition had slumped from 5/147 to being all out for the same score.

Cockburn had lost their final five wickets without adding to the score, and incredibly the only two players to touch the ball in that time were Kynaston and Boyes.

The innings was so remarkable that it was covered in the newspaper the following fortnight, with journalist Bevan Eakins of The West Australian detailing the crazy finish. The full article as it appeared in the paper is shown below; 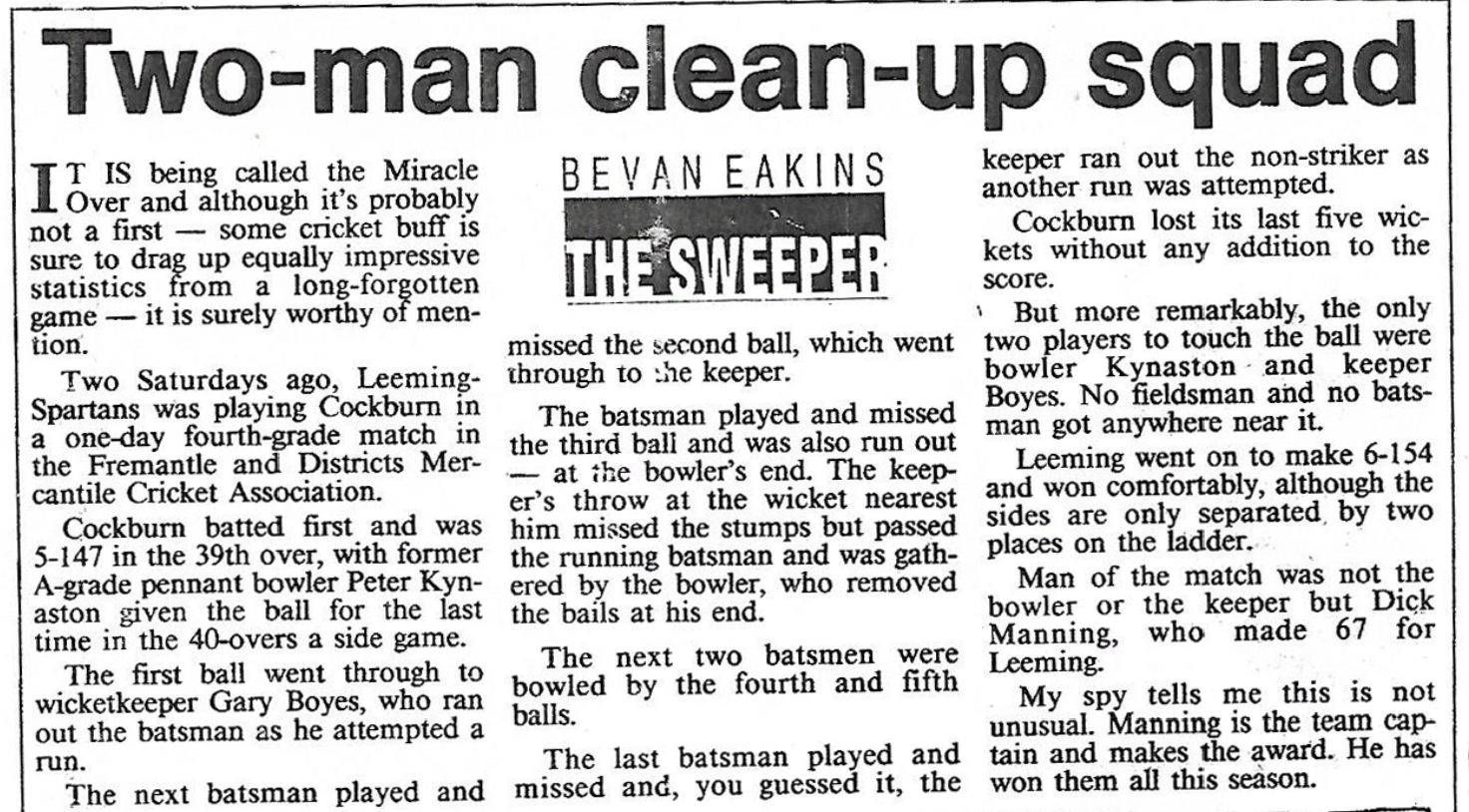 The Spartan reply started relatively strongly, before we slumped to 2/25 after losing both openers to the same bowler. That did not get us down however as the next partnership would all but take us to victory as Myles Jordan and captain Dick Manning put on a whopping 113-run partnership to take us to the cusp of victory with just under four overs to go.

When Manning was dismissed, he had made an excellent 67 and the score had 3/138, with just seventeen required for victory at less than a run-a-ball.

Jordan stayed strong to see us over the line, finishing unbeaten on a terrific 43. Myles would later in 1999 leave Spartans and move on to the Curtin Cricket Club.

Although our batting produced a stellar performance built on a huge partnership, it was the incredible end to the opposition’s innings for which this game will be best remembered – as Cockburn lost 5 wickets for nothing in six balls.

The Leeming Spartan Cricket Club would win this fascinating encounter by four wickets, comfortably chasing down the 148 we had been set for victory. It was the late stages of our bowling innings though for which this game will be best remembered.

The side would go on to reach the semi-finals in this grade, however we suffered a poor collapse in that game and were ultimately defeated. Regardless of the season’s final outcome, this match would surely have to live long in our memories as one of the greatest moments in our recorded history, a highly irregular finish to an innings that saw Cockburn go from 5/147 to all out 147 on the back of two players.

The Round 11 matchup in the Fremantle & Districts Mercantile Cricket Association’s fourth grade between Leeming Spartan and Cockburn Cricket Club would have to rank as one of the more extraordinary on-field moments from that season.

There were no premierships this year but it didn’t matter because a whole lot of memories and events helped make this a terrific season nonetheless.

The fact that an opposition side were cruising and ready to blast in the final over of their innings – only for it to be a maiden and claim five wickets is hard to fathom even the nearly twenty-five years later. The amazing statistic that saw these five wickets all claimed by just two players – the bowler Peter Kynaston and the wicket-keeper Gary Boyes is a great one for the history buffs, whereas the four run-outs is the stuff of nightmares for any batting side. They make for a series of incredible tales from an incredible match, and it would have to rank right up there with the very strangest of encounters here at the Leeming Spartan Cricket Club.

As we discussed, the game was so remarkable that it featured in the newspaper and received its own write-up at the time. This was to be one of the last games played by the Leeming Spartan Cricket Club in the Fremantle & Districts Mercantile Cricket Association – a competition we had participated in for over 67 years – and it was this fitting remarkable farewell that served as a throwback to the competition’s heyday.

Overall though this is one of those times where perhaps the scorecard itself – fall of wickets aside – doesn’t quite do the match justice, so perhaps it is best left to those who took to the field that day to truly explain the madness and brilliance that occurred that day in 1996.

This was the eighth entry in The Spartan Scorecards Series, and with plenty of matches to list, we hope to bring you a new entry as often as possible during the off-season! Be sure to stay tuned to our website, and consider subscribing to our Email Newsletter if you haven’t done so already – that way you’ll never miss an entry!