Last Saturday saw our 3rd Grade venture down to Orelia Oval to take on Kwinana in a one-day match which saw Barry Barone save the day with a match winning 126 not out.

Captain Petkovich’s men found themselves up against Kwinana for the second time in three weeks, after the two-day fixture ended in a fiery exchange at John Connell Reserve.

After the clean sweep of Kwinana in this one-day fixture, Leeming commenced their batting innings and immediately lost Graeme Bond for a golden duck. Steady wickets fell before the drinks break and Spartans found themselves 5/59 after 18 overs with the need of something special to post a competitive total. Enter Barry Barone.

A player who likes to get along with it with an footy background and one doesn’t shirk a contest, smashed a 6 with his second and third scoring shot. He then found a partner at the other end in Graham Braid, their partnership adding a further 108 runs to the team’s score with Braid making 34 runs of his own.

After Braid left the crease, “Baz” continued his carnage adding another 39 run partnership with Subodh Notiyal, who only managed a single himself, but still did the job of holding up the other end for Barone. Notiyal proved to be the last man out for the innings as Spartans closed their innings at 8/244 after their 40 overs.

Barone was left undefeated on 126 runs, including a whopping 12 sixes and 7 fours. His innings outscoring the entire Kwinana XI who could only muster 6/116 from their 40 overs.

A great result from our 2nd XI, who have now moved into second place on the 3rd Grade One Day Ladder with two one-day fixtures remaining and a chance of playing in the One-Day Final should this form continue. 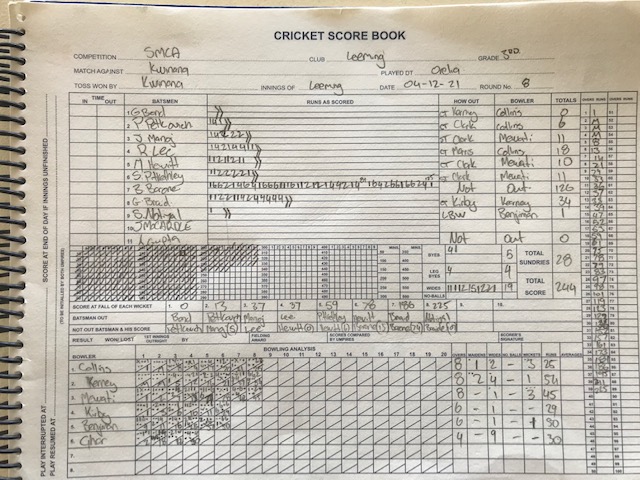