Not only are we coupling the day with our Fin50 sundowners, for the first time at John Connell Reserve we are playing a twilight fixture under lights!

Following the completion of the massive light upgrades in March, the Spartans will be ‘testing the waters’ (hopefully just figuratively following Perth’s recent rain!), with our scheduled start times taking place later in the day.

As always there will be two massive matches, but instead of commencing in the morning, we have game one scheduled for a 1:00pm start, to be followed by the highlight of the day (or night!), our twilight fixture from 4:00pm until 6:30pm!

Of course, all four lights will be turned on and we’ll have the pink ball for both games, giving anyone who is keen to play the chance to play under lights for the first time at the Spartan headquarters! 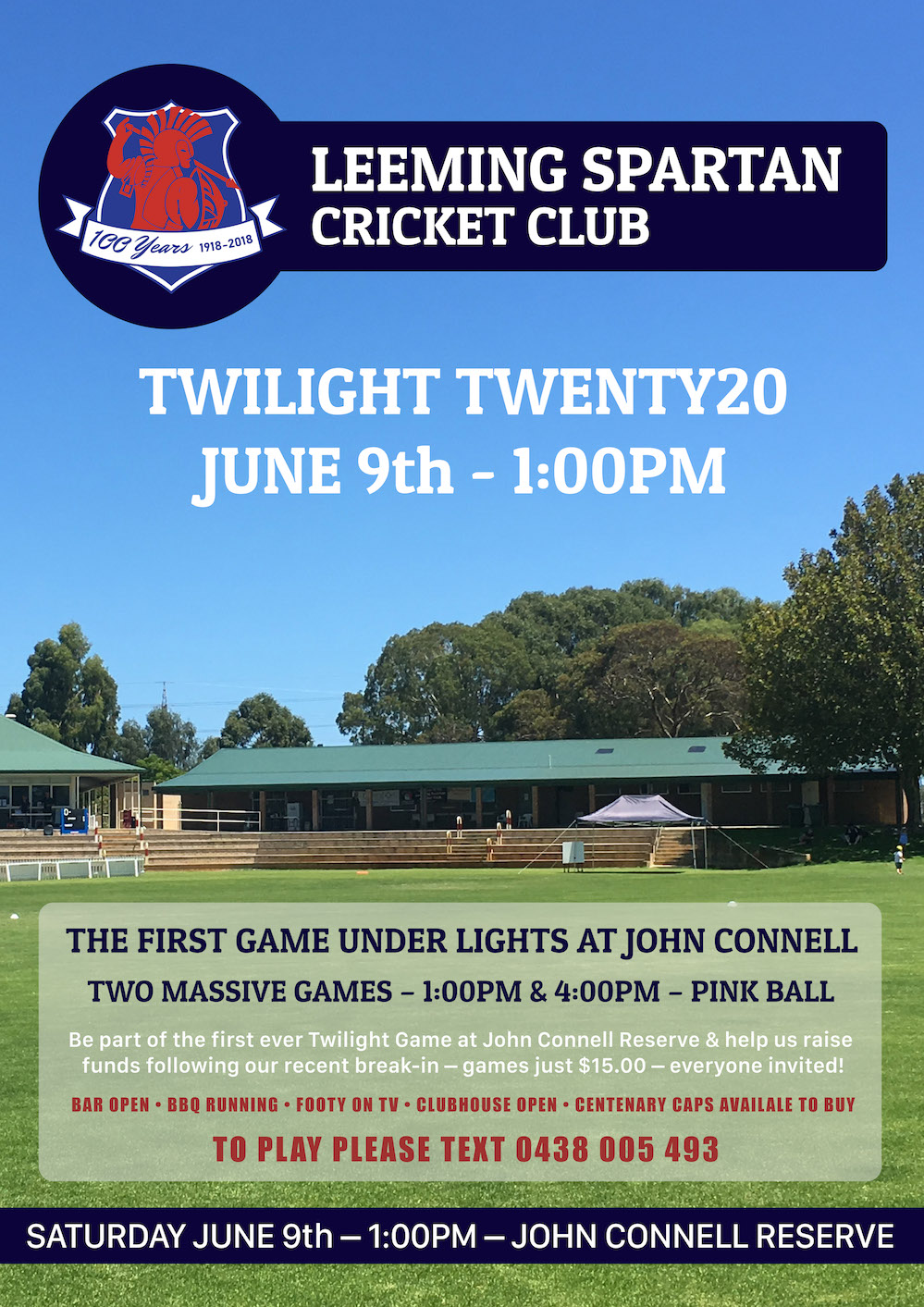 As always we will have the bar open, the BBQ running, live footy on the telly and for the first time, our limited edition one-hundredth year baggy caps will be available for purchase!

We’re also coupling this massive day with our Fin50 celebration, the first opportunity for those who have generously donated towards the Leeming Spartan Cricket Club’s Centenary Ball to come together and catch up during the off-season.

Those in the Fin50 initiative will also receive their limited edition shirt, which has been donated by Challenger Valves and Actuators. It isn’t too late to become part of the Fin50 team either – a donation of $50.00 or more towards our massive Centenary Ball on November 17th is all it takes, and in return you’ll receive a mountain of goodies and benefits for years to come!

Matches are just $15.00 per game – hopefully proving to be a crucial fundraiser for the Club following our recent break-in that has seen almost all of our equipment stolen, including our trailer and training gear. Following meetings with local police the full replacement value of these items is now – for the Spartans alone – in excess of $32,000.00 – certainly not the ideal way to move towards our one-hundredth year.

Anyone and everyone is more than welcome to play – simply contact 0438 005 493 to register your interest for one (or both) of the games.

It certainly promises to be a massive and historic day down at the Leeming Spartan Cricket Club, so we certainly hope that you are able to attend!

We’re also busy preparing for a second WinterT20 against our friends at the Ferndale Lynwood Cricket Club on June 23rd, so be sure to stay tuned.