Update: This unfortunate event took place during the month of May 2018, but in order to properly promote our Centenary Year in November 2018, we have elected to hide this post so as not to dissuade any visitors. If you require any more information please contact the Leeming Spartan Cricket Club Secretary, Daniel Coombs, via Email at secretary@spartans.com.au. Thank you for your understanding.

Gutted. That is the best way to describe how we’re feeling after thieves broke in to the Leeming Spartan Cricket Club’s garage on Saturday morning, making off with an estimated $20,000.00 in stock.

On the early hours of Saturday morning, it is alleged that thieves cut the locks on the John Connell Reserve’s gate and proceeded to drive over the turf directly to the Spartan Garage, located downstairs on the east side of the clubrooms.

From there they have allegedly used a powersaw to cut through the metal securing the locks on the garage, before entering the premises and taking an enormous amount of Club supplies, gear, and merchandise.

Namely, more than twelve club kit bags that are used on game day — filled to the brim with bats, pads, gloves, helmets and first aid gear have been stolen, an estimated value of over $6000.00 there alone.

What is most disappointing is the fact that much of this gear has been kindly donated by Spartans over the last twenty years and to have to replace it all at once makes for a considerable upfront cost. To most, these items are not worth too much and in all likelihood are not saleable, most are marked with either the club logo or “LSCC” on the insides making them easily identifiable.

What purpose they have with these items, which being club gear for our newest players who do not yet have their own equipment, is not in the greatest quality, but certainly to us at the Spartans they are crucial pieces of equipment.

Perhaps signifying the desperation of these thieves was the fact that they ransacked every square inch of the garage, taking even the stationary from our cupboard – pens, pencils, rulers and raffle tickets. Not exactly something that would fetch a considerable sum at the markets. 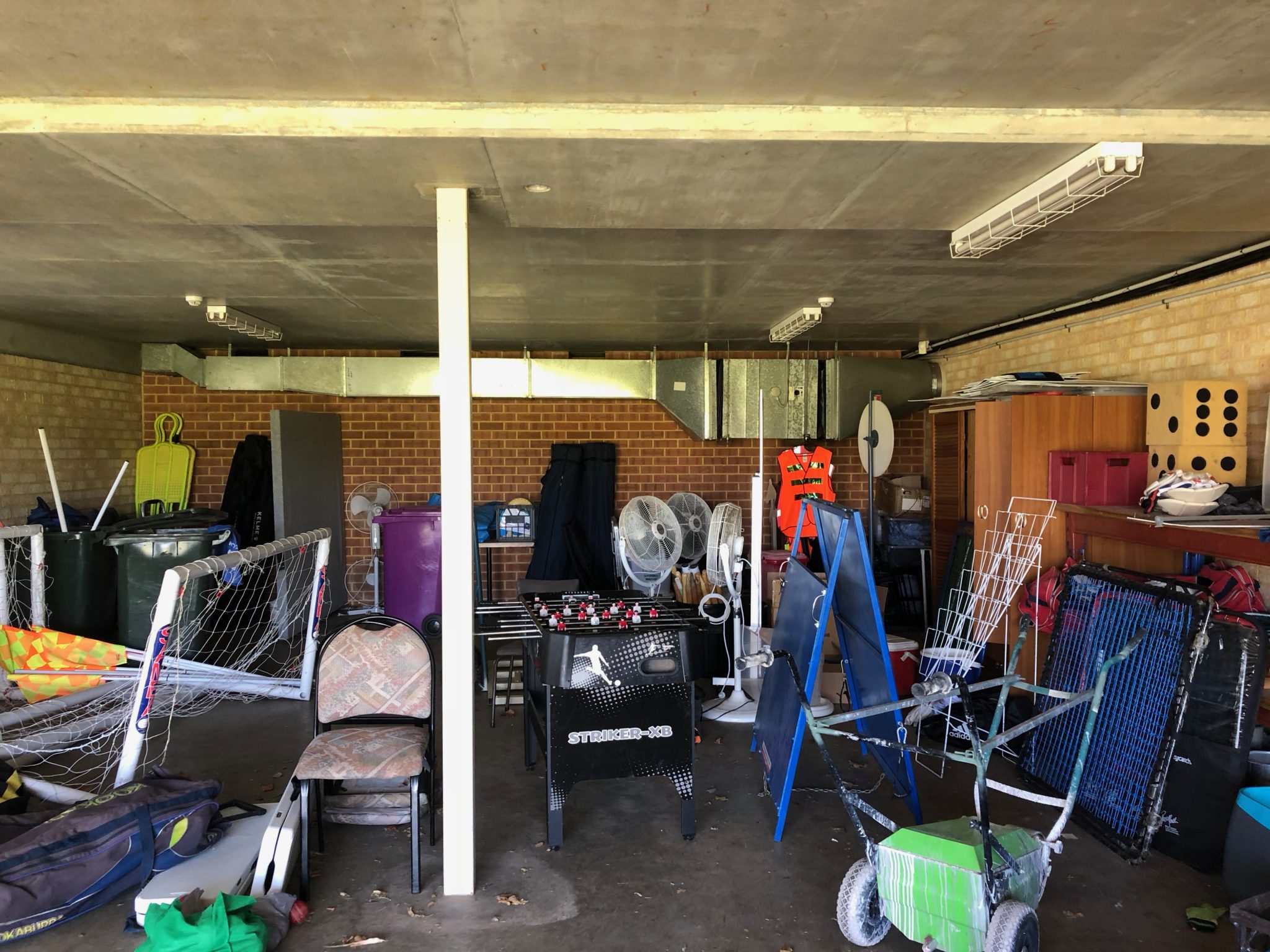 The state of the garage after Saturday. The foosball table and blue scoreboard were found on the oval.

Rummaging through the property they also found a number of council-owned generators and batteries, all of which they added to their score. Most of our training equipment is now also lost, and roughly five boxes of brand new cricket balls (each ball is valued at $50.00 each and there are 12 to a box) now belong to somebody else, which is a major issue ahead of a milestone one-hundredth year.

The answer to how they loaded all of this stuff is easy – they also took our trailer that we use to haul the gear out for our centre-wicket net practices – and that netting is also now gone.

It is extremely disappointing and whilst we are insured, the full extent of what is now gone remains to be seen – luckily it seems that no memorabilia (not that we store it in the garage anyway) has been taken, although a few old scorecards are yet to be accounted for.

Our Club audio-system, at least ten stand-up shade tents, golf clubs and some sponsor signage (why, we have no idea) has also been stolen, but interestingly the Club’s printer and line marker – both of which are brand new – have been left.

The scoreboard and foosball table also survived, but that only seems to be because they fell off the back of the trailer as they made their getaway – we recovered them on the oval. Both however have been heavily damaged.

Why you would steal from a not-fot-profit cricket club is what is most disappointing about this. All of our gear will likely be untouched and end up in landfill as it would be near impossible to sell. It’s old, used, but to us incredibly important as we need it desperately for our season.

The fact that it is winter means all of our items have been stored away for the off-season, hence the high number of items in the garage belonging to the Spartans at this time. 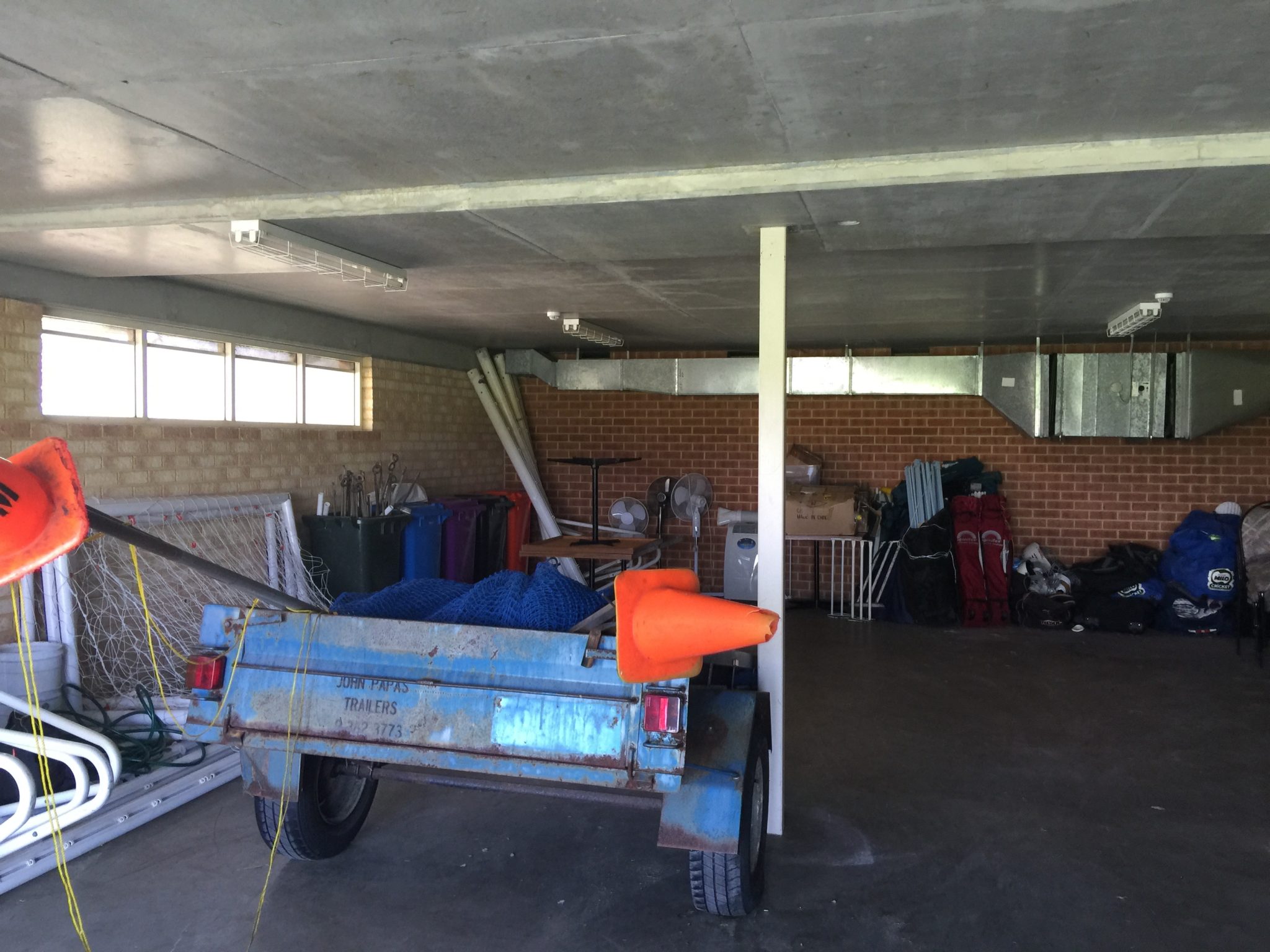 The blue trailer used for training (pictured in 2015). If you happen to see this please let us know, it is marked with “John Papas Trailers” on the back.

President Peter Coombs expressed his “extreme disappointment”, noting that at such a crucial time on the verge of the Club’s one-hundredth year, we have been hit “right where it hurts”.

He has been in contact with Murdoch Police who have dusted for prints, however it seems to no avail.

Thankfully the Club (through the Leeming Sports Association) is insured, but a bigger problem will be providing evidence of these items as much was donated to the Club. Additionally we still are not fully sure that we have accounted for everything that is missing, and much more work will now need to be done to determine what we need to (re)purchase.

Whether this will impact the Club’s plans for our Centenary Ball remains to be seen, however the Club recently put forward over $6000.00 towards subsidising the price of tickets from $300.00 per person to just $150.00.

As is the case with most sporting clubs, every cent that is made goes back into fostering the growth and development of the Club and its players, and the hard work that has gone into acquiring these items makes it all the more disappointing.

Overall however, the only way is up and there is no doubt we will be back better than ever come October this year. Whilst this is certainly a bump in the road, it is by no means the biggest issue we have had to overcome in our one hundred years, and you can bet we will be back stronger than ever because of it.

We’re also asking that if you have any information that you please come forward as it will be a huge help.

We are not sure whether these crooks are repeat offenders, but such is the extent of this clearly calculated attack, we are not ruling out further break ins.

Alarm systems have yesterday been installed with cameras to follow. All remaining items of value have now been removed from the garage.

Should anyone be able to assist with our efforts to replace these items, such as by way of donation, then that would be hugely appreciated. We also ask that you please keep an eye out on sites such as Gumtree and eBay, as well as any Facebook “buy and sell” groups in the coming weeks.

If you have any information and/or happen to come across any of these missing items, please contact Crime Stoppers on 1800 333 000.

For further comment the Leeming Spartan Cricket Club can be contacted by Email at secretary@spartans.com.au or via mobile on 0438 005 493. Media enquires courtesy of the Secretary. 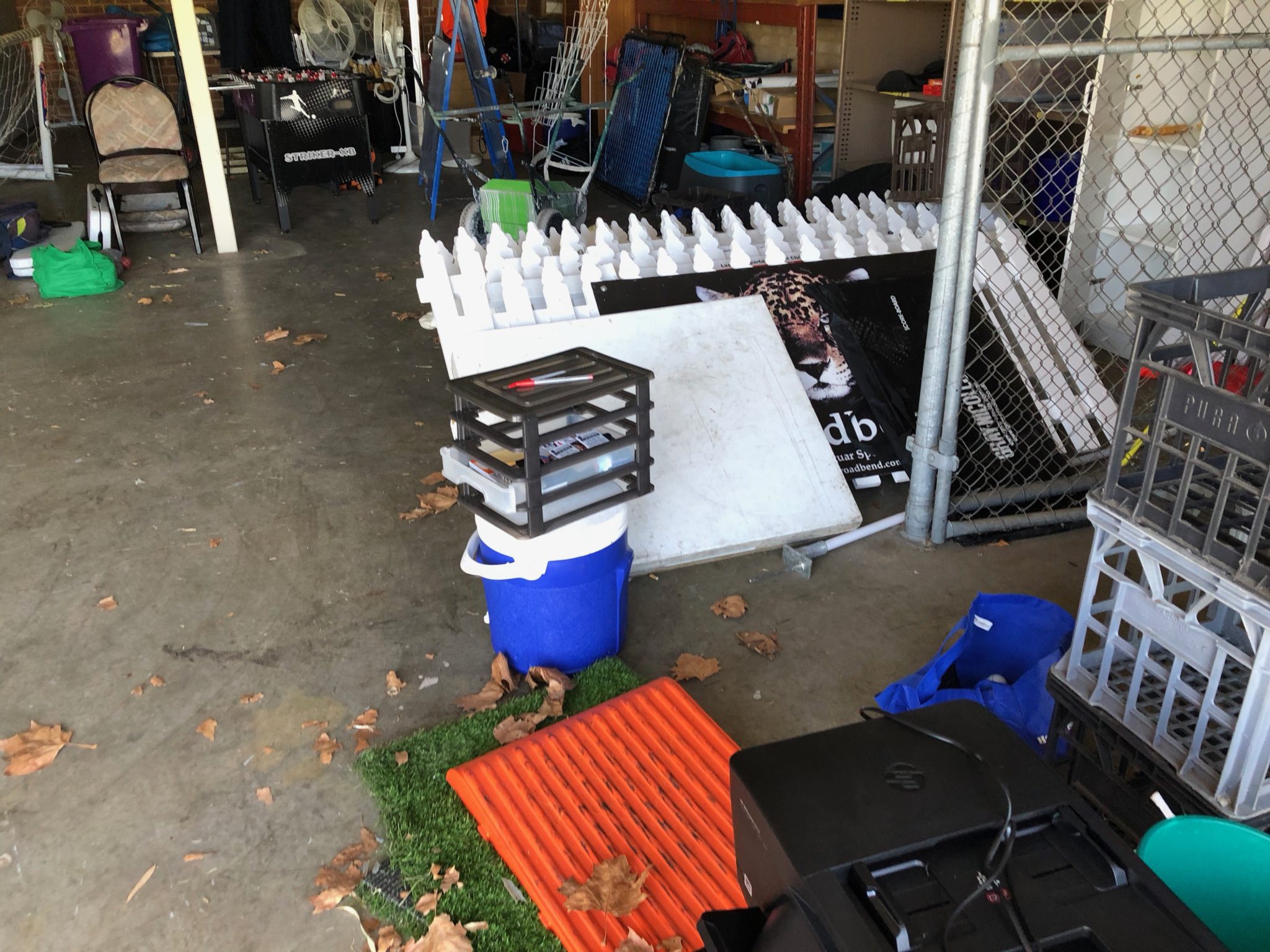 Stationary draws were stolen, with only one left. A footprint can be seen over the Roadbend sign. 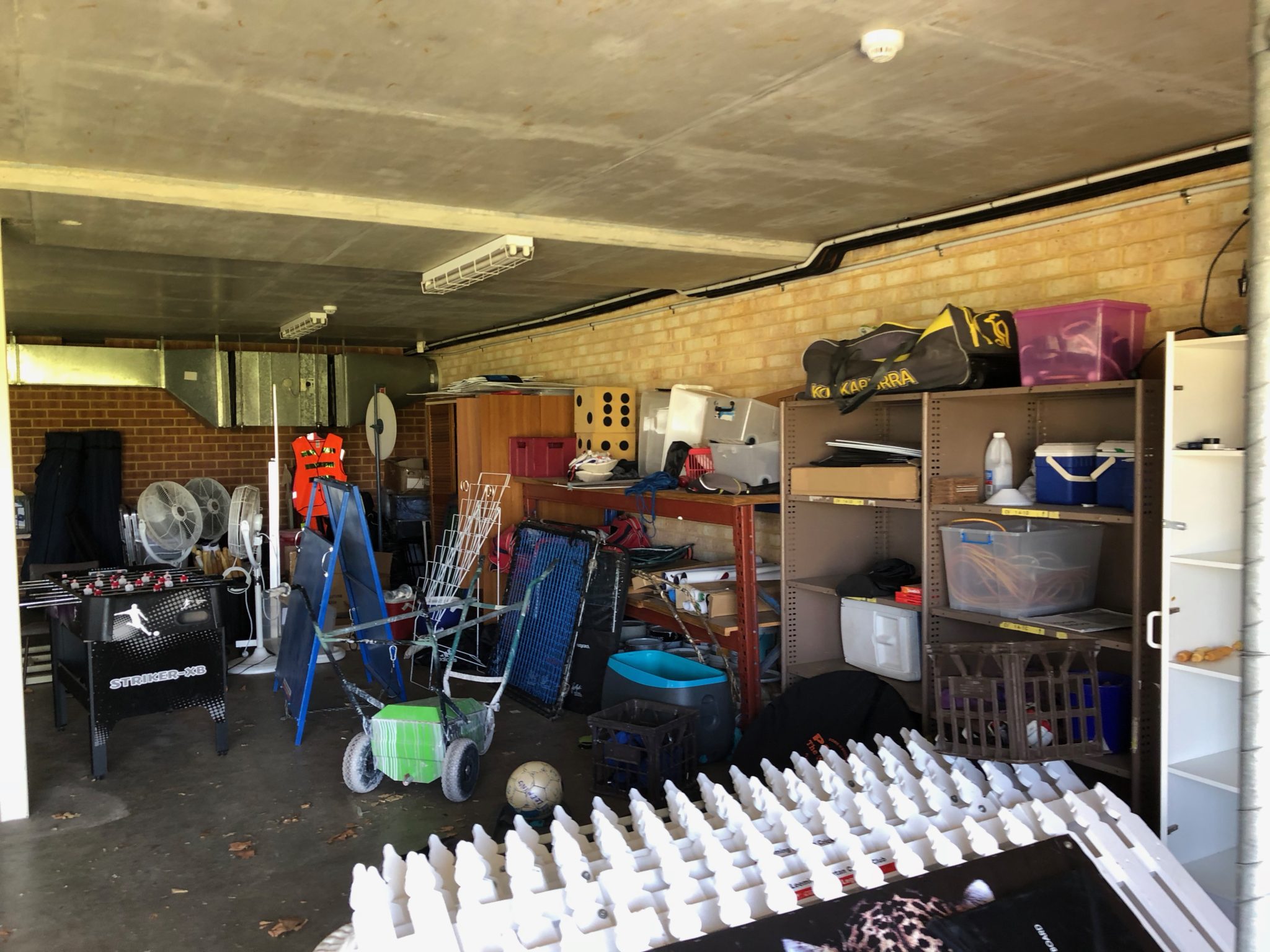 The state of the garage following the robbery. 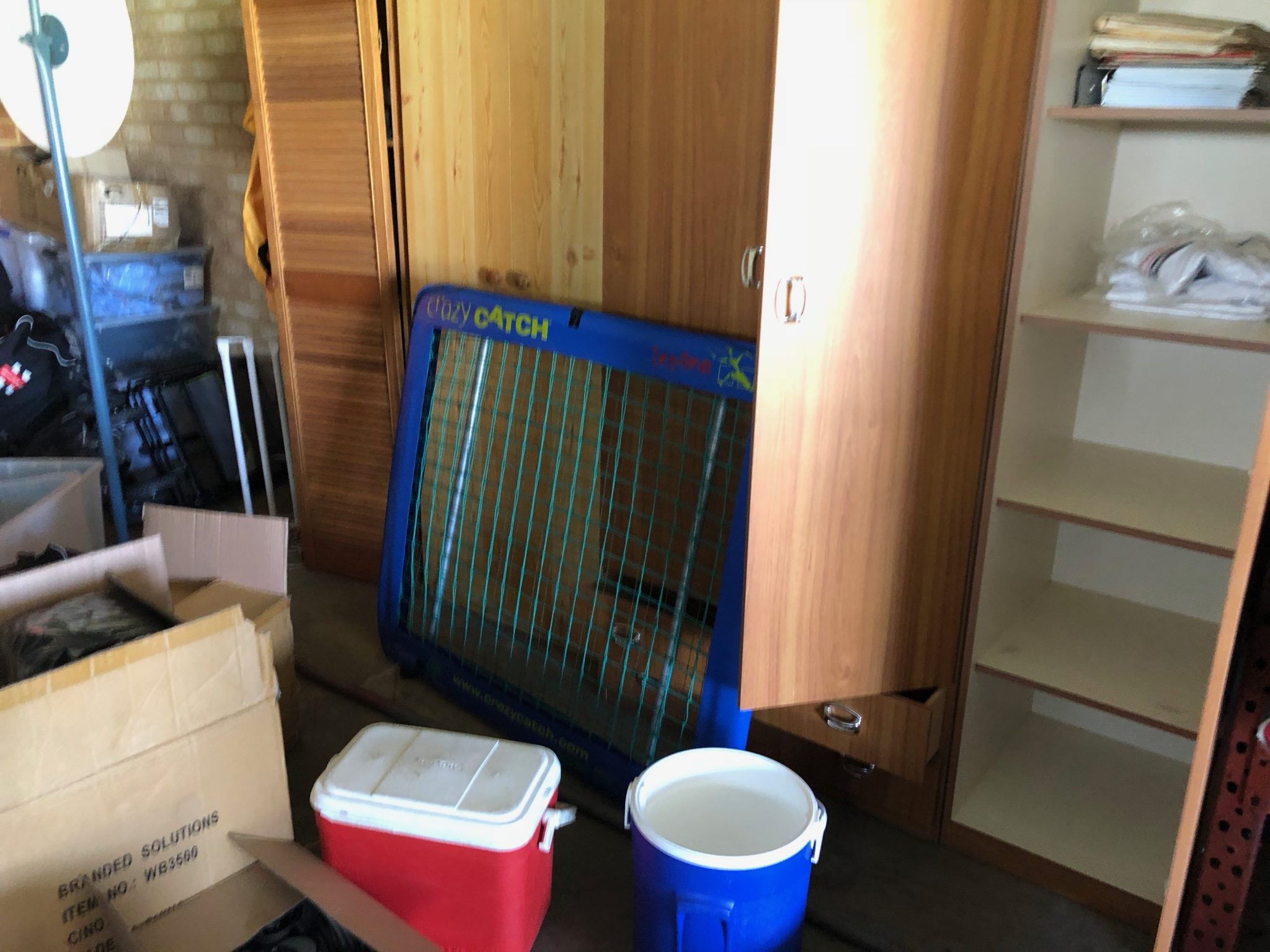