We’ve had an interesting request come in recently from one of our members who has asked about those who have taken five-wickets or more and scored fifty or more in a finals match. It’s led to the opening of a pretty deep barrel that is filled with a fair few interesting statistics, as we’ll document below!

Following our recent look back on one of the Spartan Scorecards of old in our new The Spartan Scorecard Series, where the first entry denotes the only player to score a century in a two-day final, it has led us to look further into the history books and come up with some interesting facts worth sharing!

There has been 29 fifty-plus scores in finals (semi finals and/or grand finals) from a total of 26 different Spartans over the years. Likewise, there have been 27 five-fors in finals from 21 different players.

Only two players have ever made centuries in finals for Spartans, Peter Phillips with the aforementioned 105 in a two-day grand final against Hilton in 1999 and 110* by Stephen Quartermaine against East Fremantle in a one-day final in 2001.

Interestingly, there has never been a Spartan to score a century and take five wickets in the same match in a finals fixture.

“Will Webber is the only Spartan player in over one-hundred years to take a five-wicket haul and score a fifty or more in the same match in a final.”

Will Webber is the only Spartan player in over one-hundred years to take a five-wicket haul and score a fifty or more in the same match in a final. In the 2017/18 Grand Final in our Third Grade against Cockburn, Will put on a fantastic all-round performance in that match, scoring 60 not out after earlier taking 5/29.

Only one other player has the distinction of scoring both 50 or more or taking 5 or more wickets in finals, that player being Spartan Legend Bevan ‘Waca’ James, however Will’s is the only one to come in the same match. 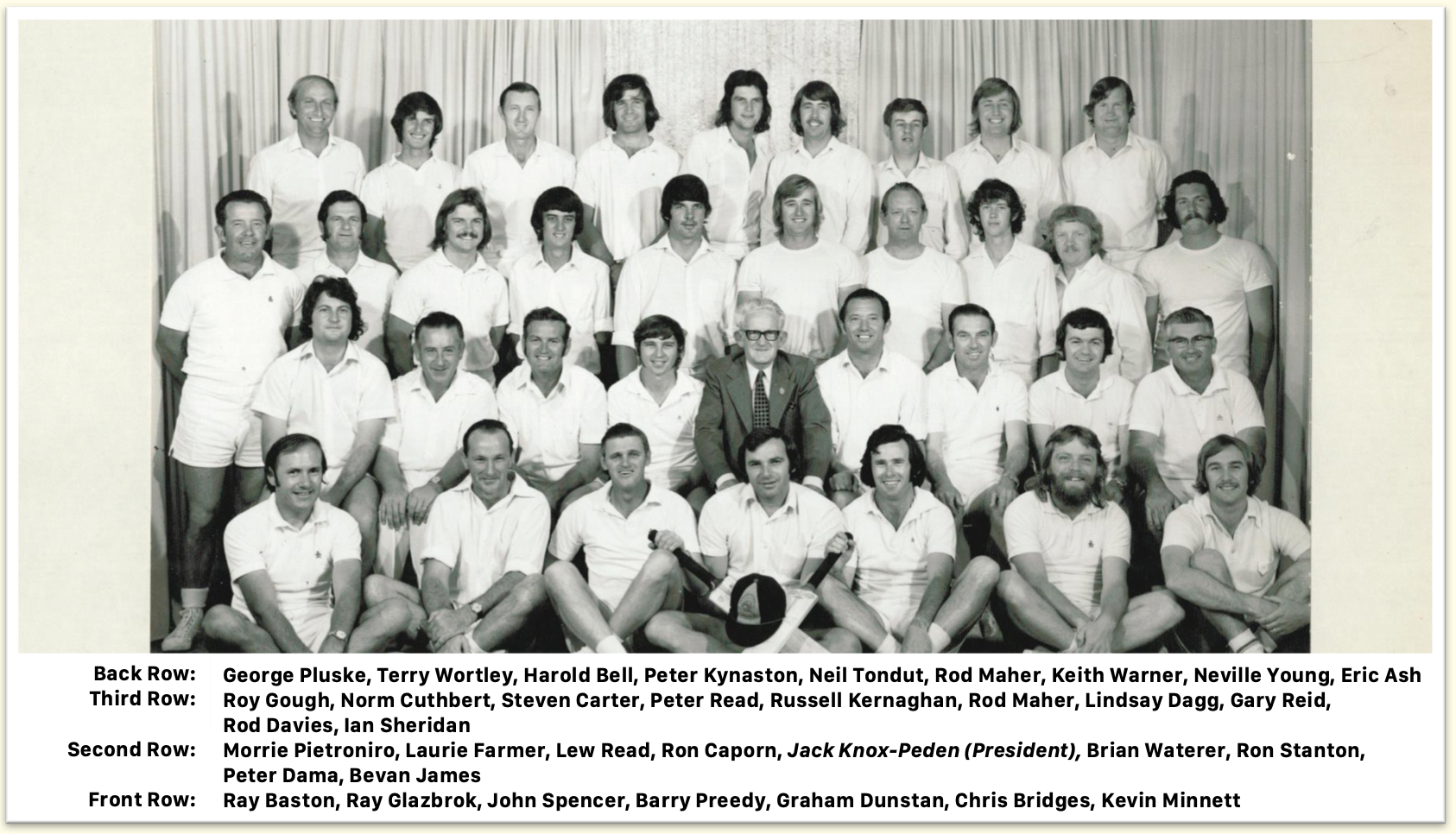 This was a most memorable season when a dream became a reality as the First Grade team thrashed Hilton Park in the Grand Final to win the club’s first premiership since 1925/26 at the top level. The win was based on the inspirational leadership of Lew Read, great bowling by George Pluske and a match-winning haul by Bevan James. The team was well supported by a superb display of fielding by all members of the side.

Bevan James bowled magnificently to set up the Grand Final win when he mesmerised the opposition batsmen to take 5 for 28 in the first innings.

Spartans with a score of 50 or more and five wickets in the same finals fixture.

The finals for the Leeming Spartan Cricket Club have certainly produced some very interesting statistics over the years, and a few more have gone one step further by placing themselves in the rarest of categories.

Denis Bell also etched himself into the record books, an incredibly rare one at that, by scoring two scores of fifty or more in the same finals match. In the 1963/64 First Grade Grand Final against the CBC Old Boys, Denis made 71 and 52. We lost the game but it was a fantastic batting performance by Denis.

Only two other Spartans have scored more than one fifty in a finals fixture, in different matches. Brad Mant has made 90* against Phoenix in the First Grade One-Day Grand Final of 1997/98 and 81* against Hilton in the same grand final match when Peter made his 105.

Peter Phillips is the only other, having scored that famous 105 as documented in our first ever The Spartan Scorecards Series in 1999 after having made a score of 52 against Cockburn in the Second Grade one-day grand final in 1997.

On the bowling side of things, it is much the same – with some very interesting statistics coming from players in finals. Twenty-seven five-wicket hauls have been taken by Spartan players in finals over the years.

The first came in the 1963/64 season when Spartan legend and Team of the Century member George Pluske took the first, with his 5/103 against the CBC Old Boys. Interestingly, this came in the same match as Denis Bell’s twin scores of fifty, and despite these outstanding performances, we still lost!

The best ever figures by a Spartan player in a final is Tony Carroll‘s 9/26 against the arch rivals CBC in the 1977/78 fourth grade grand final. Steve Carter, who debuted in 1973 claimed the second-best figures to date with a whopping 8/25 against Rockingham in the Second Grade Grand Final in 1973/74.

This was his first season at the Spartans and to make things even better, he became the first person to ever claim two five-wicket hauls in the same finals fixture. To go with his 8/25, Steve took 5/22 in the second innings!

In terms of having taken five-wickets in a final the most number of times, Mick Bennett and Sean Wright lead the way with three, while Rod Duncan is the only other Spartan to have ever taken seven wickets or more in a finals fixture with his 7/29 in 1993 in our most famous First Grade final victory.

Be sure to check out the full list below! 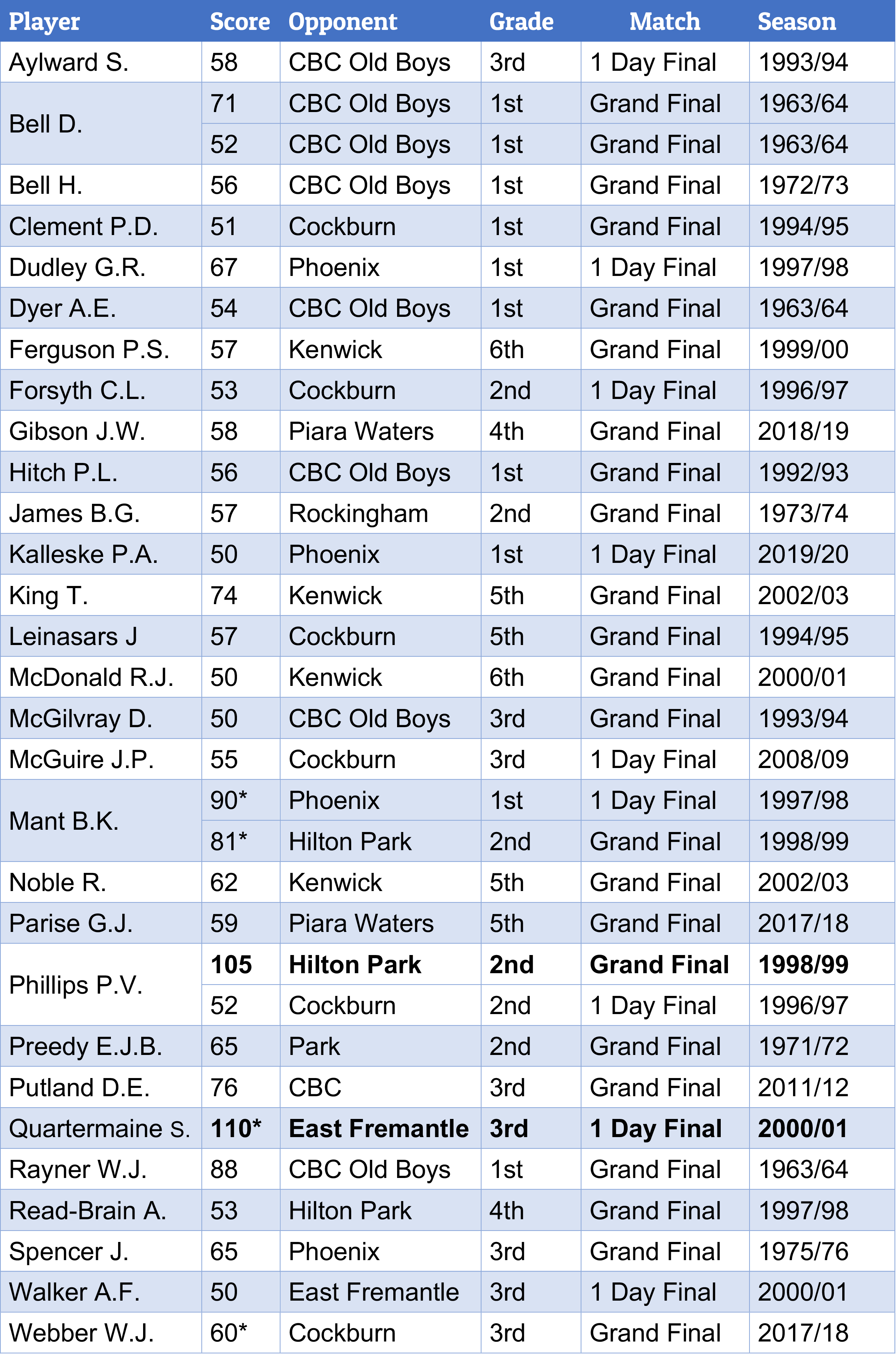 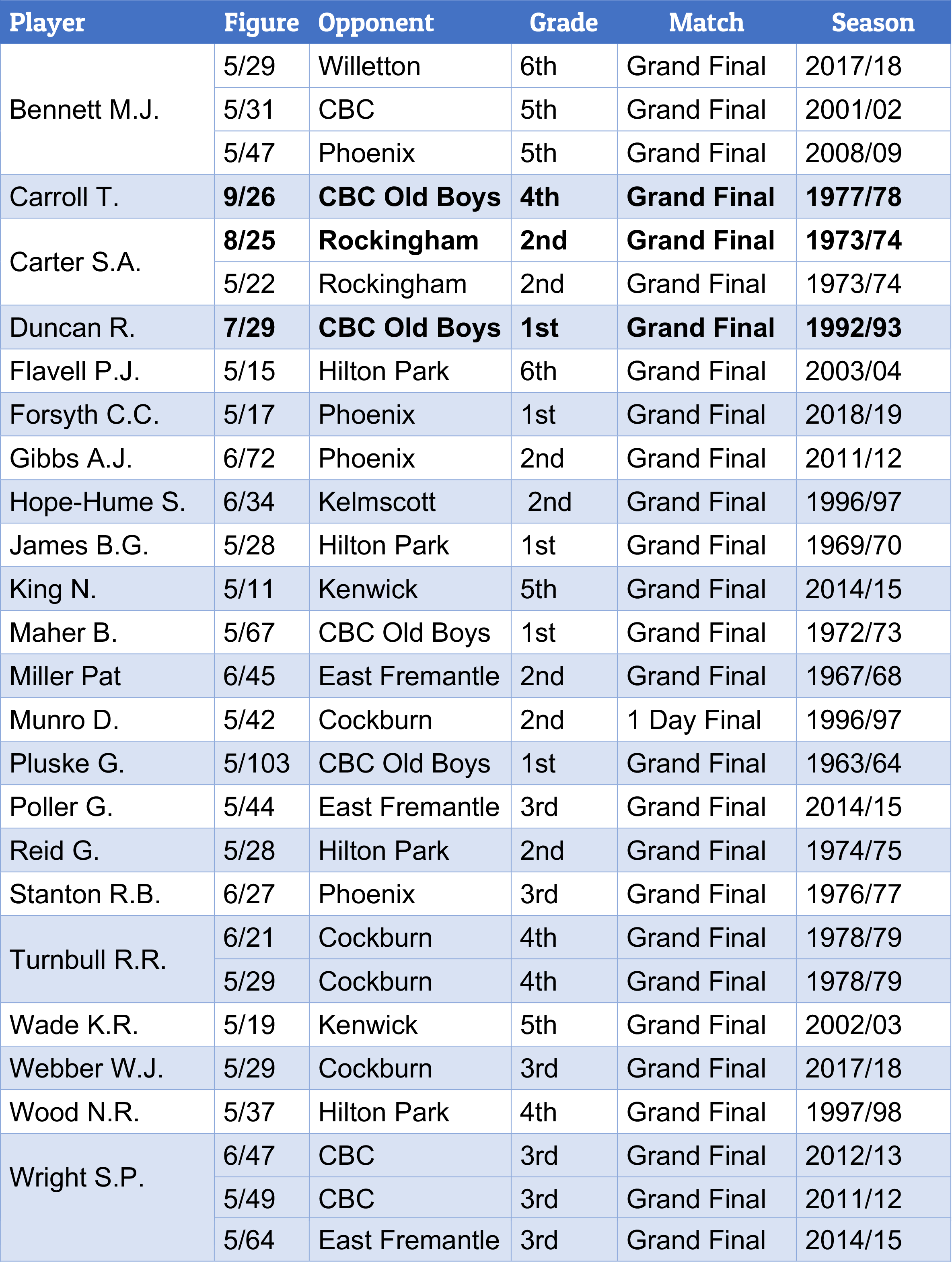