Of our two-day grades, First Grade after falling into the top four on the last day of the regular season after a stellar performance against Piara Waters were looking to continue that form against local rival Phoenix C.C. Unfortunately, the minor premiers from Tempest Park came out on top posting an imposing 231 on day one. Spartans’ batting lineup could only muster 146 in reply, thus ending their quest for four two-day premierships in a row.

The result was much brighter for our Seventh Grade, who after securing the minor premiership with two rounds remaining in the regular season hosted their semi-final at John Connell Reserve against fourth placed Kardinya Lakes. After being asked to bat first, Leeming posted a very competitive 187 after 64.2 overs of their allotted 65 overs in their first innings. In reply, Kardinya were never in the hunt, losing steady wickets to be all out for 91 after 47 overs.

In the One-Day Grades on Saturday, One-Day A’s ventured out to William Skeet Oval, Forrestdale in a second vs third match-up. Captain Hack won the toss and batted, however partnerships never got going and our boys posted 9/102 after their 35 overs. Early wickets was the plan, but unfortunately a couple of catches went down which proved costly and Forrestdale passed their target after 26 overs. The “A” Troop fought to end and after the season they have had, a solid semi final result is nothing to be sneezed at.

Our One Day B’s have been on the wrong side of a few close finishes lately, so no surprises their semi final out at Piara Waters Reserve was any different. Leeming batted first and posted a competitive 123 after 34.5 overs. And sure enough the result came down to 6 runs to win for Piara Waters with 9 wickets down with one over remaining. Neil Hewson’s men came out with a wicket, a run out on the first ball of the last over to seal a grand final birth by 5 runs.

Finally, our One Day E’s made the journey out to Armadale’s Gwynne Park. In what proved to be the only One Day E semi-final actually played due to Covid on the other side of the draw, Captain Chubba won the toss and bowled. His side stuck to their strength and bowled out Armadale for 113 after 33 overs. This allowed our E’s top order to take their time, settle in and chase down the target with two overs to spare and five wickets in hand.

So after all that, it has come down to three grand finals for Leeming Spartan this season. Here is a summary of where they are and where you need to be to cheer them on (from a social distance of course) 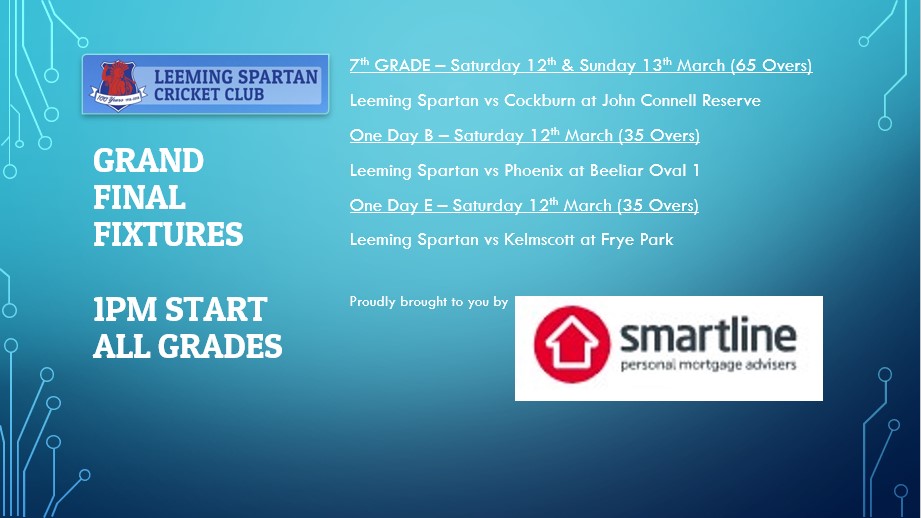