Last weekend saw our 2021/22 season come to its thrilling conclusion with three of our grades in Grand Final Action!

Our only two-day grade to make the final weekend of the season, was our 7th Grade. Ron McDonald’s side headed into the game taking out both the One-Day Final and Minor Premiership after the qualifying rounds. Our boys won the toss and batted first at the “Home of Cricket” – John Connell Reserve. However, partnerships failed to really get going and steady wickets fell to leave Leeming 8/98 with about 20 overs left in the innings. Finally, some resistance came from our last three batsmen in Rushton, Brent and Poller to ensure we batted out 62.4 overs at least to muster up 134 all out and something to bowl at on Sunday. However, the opposite happened for Cockburn, who started more positively and struck up an opening partnership of 43. Wickets were hard to come by even with strong bowling led by Frantom, Simpson and Poller. The tide then turned late in the day, with Cockburn losing 4/19 in the last hour of the day. Our boys fought on pushing their opposition into the last over of the game with the scores tied. The winning runs were finally squirted down the leg side after two more balls with Cockburn the victors by 3 wickets.

On a brighter note, One Day B’s had their quest for premiership glory on Saturday at Beeliar Oval against Phoenix. Captain Neil Hewson, won the toss and elected to bat. Runs flowed steadily from Green (27) and Walters (40) and then later in the innings from the Skipper Hewson, who made 32 before being the last man out at 8/150. The innings closed just 6 runs later. So with a “runs on the board in finals” approach, Leeming were looking for early wickets against a Phoenix batting line-up full of 1st Grade experience. Tight bowling from Martin (1/18) from his 7 overs and Jarrad Sinclair (1/25) from 6 overs ensured a good start for the visitors. But once again it was a tight finish for our team, and the difference was Walters with the ball again coming on late to take the final 2 wickets in just 3.2 overs to clinch the game for Leeming. Such an awesome team effort for this team, who battled on several Saturday’s to find 11 players and often fielded with 9 or 10 players. Then results didn’t go their way towards the end of the season to finish in fourth spot after a close battle on the ladder. But this goes to show finals are a different ball game, after knocking off the top side Piara Waters in the semi-final last week, the momentum was with our boys!

For the record, seven of the eleven players from Saturday’s team were originally from Southern Districts Cricket Club, who formally merged with Leeming Spartan prior to the 2012/13 season bringing across their One Day A team at the time to play under our club banner. The seven players in the line-up on Saturday were Neil Hewson, Darren Hewson, Matt Walters, Clint Gandy, Michael Pettigrove, Alex Martin and a very young Jarrad Gandy, who sub-fielded when required back in the day.

A huge congrats to One Day B’s on their season!

Lastly, our One-Day E’s ventured out to Frye Park, Kelmscott to take on the locals in their Grand Final on Saturday. Captain Chubba won the toss and elected to bat. However, batting was tricky against the tight Kelmscott bowling line-up, with regular wickets falling to see Leeming bowled out for 55 inside 27 overs. Early wickets were a must but only 3 were possible as the experienced Kelmscott top order raced past the winning target inside 21 overs. A vallant effort from this squad to make it to the Grand Final and up against a far superior opposition. A great achievement to all that featured in our lowest grade this season and something to build on next season.

So this brings to a close the Season that was 2021/22. As advised already, our Read-Waterer Medal and Season Wind-Up Presentation Nights remain on hold due to Covid, at this stage on a date/s in September prior to next season. Our club AGM, generally held in May or June is to be confirmed as well. So stay tuned and stay safe!

Below is our victorious One Day B side from Saturday; 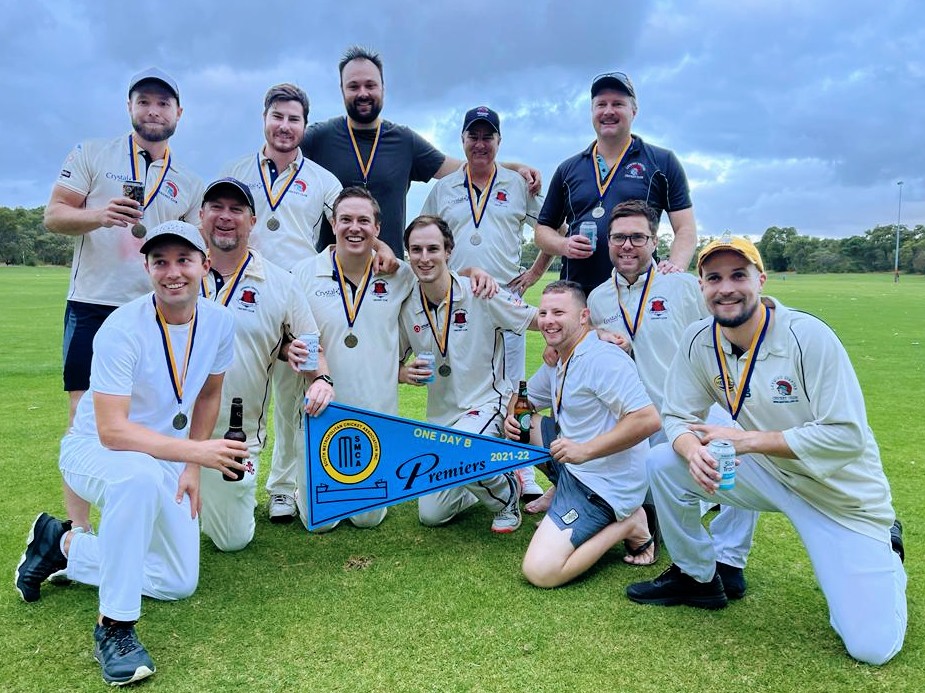