Following on from the recent Cricket West Cup in January, where many of our Spartans competed for the SMCA “Yellow Caps” there has been a representative squad chosen with no more than 3 Spartans chosen.

A huge congratulations must go to Spartans own Ben Harris, Kodie McKrill and Chad Forsyth for being selected in the Cricket West Senior Squad. This makes Leeming Spartan the most represented club from the SMCA.

The State Carnival is on Sunday 1st March at the WACA where the Cricket West XI play Two T20 games. One against a Country XI and one against an Indigenous XI.

We encourage all Spartans to get down and support the boys on the day. 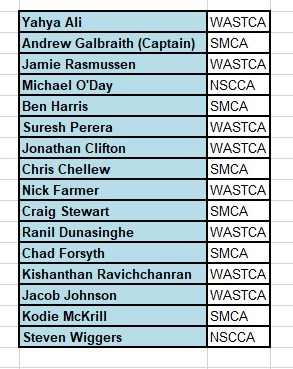