Following on from Sunday’s club AGM, we now announce the Executive and Club Committee for the upcoming Season 2022/23.

See below our new club committee for Season 2022/23, ready to guide our club through the next 12 months; 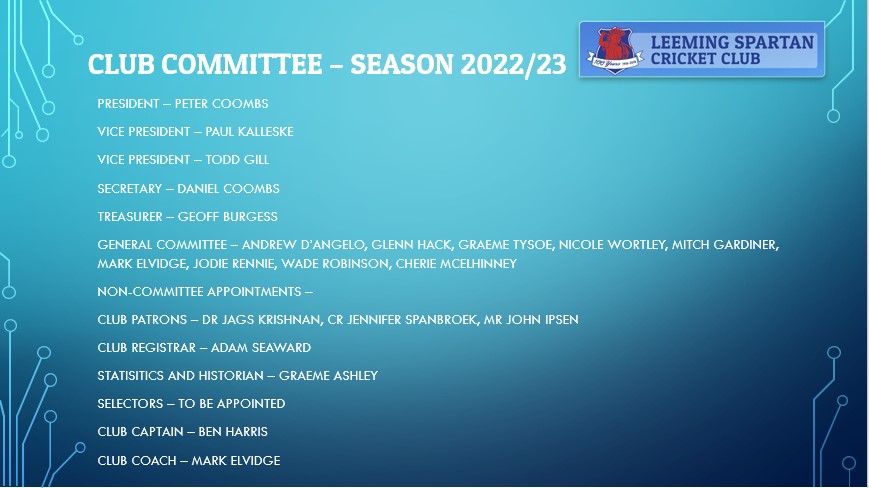 Season 2022/23 will see President Peter Coombs returns to the top job for his eighth season in charge, along with his long serving Vice-President, Paul Kalleske. Our Secretary and Treasurer’s return for another year on the Club Executive in Daniel Coombs and Geoff Burgess, respectively. The only new face to the club executive is Todd Gill. After one season on the general committee, Todd steps up to take over from one of the longest serving committee members, Ron McDonald as Vice-President.

“Ronny Mac” has decided to step away from the club committee for the last time. After 35 years of loyal service as a committee man, team captain, chairman of selectors, selector etc etc, he feels the time is right to step away and enjoy himself even more when he is around the club (if that is even possible). The club cannot thank you enough Ronny! Well done on your loyal service over all these years.

A huge thank you also to the departing members of the club committee – Pete Brown and Tomas Frantom. Thank you both for your assistance around the club, behind the scenes and at club functions and events. Both will continue to be important parts of their respective grades at opposite ends of the club structure, no doubt next season.

When it comes to the non-committee appointments, Season 2022/23 will see for the first time in club history, no more than three Club Patrons. Dr Jags Krishnan, our Labor State Member of Parliament in the seat of Riverton returns again this season, as does former Spartan President John Ipsen, who held the title for Season 2020/21. Our newly appointed third Club Patron for this season is Councillor Jennifer Spanbroek, who is the current Councillor at the City of Melville’s Bullcreek-Leeming Ward, where naturally where our club is situated.  Cr Spanbroek has been working closely with our Executive Committee on obtaining the City’s approval for our second ground and club room’s redevelopment plan over past few years.

Two positions which haven’t changed are our Registrar and Statistician/Historian. With Adam Seaward and Graeme Ashley both continuing respectively with their “behind the scenes” roles from previous seasons.

However, the final two non-committee positions listed above have changed hands in the off-season. We have a new Club Captain in Ben Harris and a new Club Coach in Mark Elvidge. Both these Spartan first-grade veterans have taken over their new roles from Paul Kalleske and Peter Waite. “PK” has decided the time is right to refocus on just a playing role with a eye to the future and “Krusty” has also decided with increasing work commitments to retire from coaching. On behalf of the club, we thank both gentlemen for their dedicated service in their positions and wish Krusty all the best for the future and hope to see him around the club during the season.

In Harris and Elvidge, we see an experienced leadership team both on and off the ground for 1st Grade and the rest of the club moving forward.