The Leeming Spartan Cricket Club has been busy trying to raise awareness of the hugely important John Connell Reserve Development Project that we have been working on significantly in recent months, and this includes reaching out to the local gazettes in our area.

An article was recently published in The Melville Gazette last Thursday that attempts to provide some insight into what the project entails, why it is required and why it is yet to begin.

The key component that is looked at in this particular article, written by Adam Poulsen from Community News details the Leeming Spartan Cricket Club’s hopes to extend the John Connell Reserve by approximately 18 metres on the eastern fence to incorporate a second oval – a fight that has been in the works for the past 25 years and repeatedly stifled by the City of Melville.

Ultimately the article provides a fairly good overview of the issues that the Leeming Spartan Cricket Club, the Leeming Bowls Club and the Leeming Strikers Soccer Club face as we all try to secure a better future for our more than 700-collective members and friends.

You can learn more about the John Connell Reserve Development Project and the four components that it entails by clicking here.

The article is attached for reading below as both a PDF and extract. 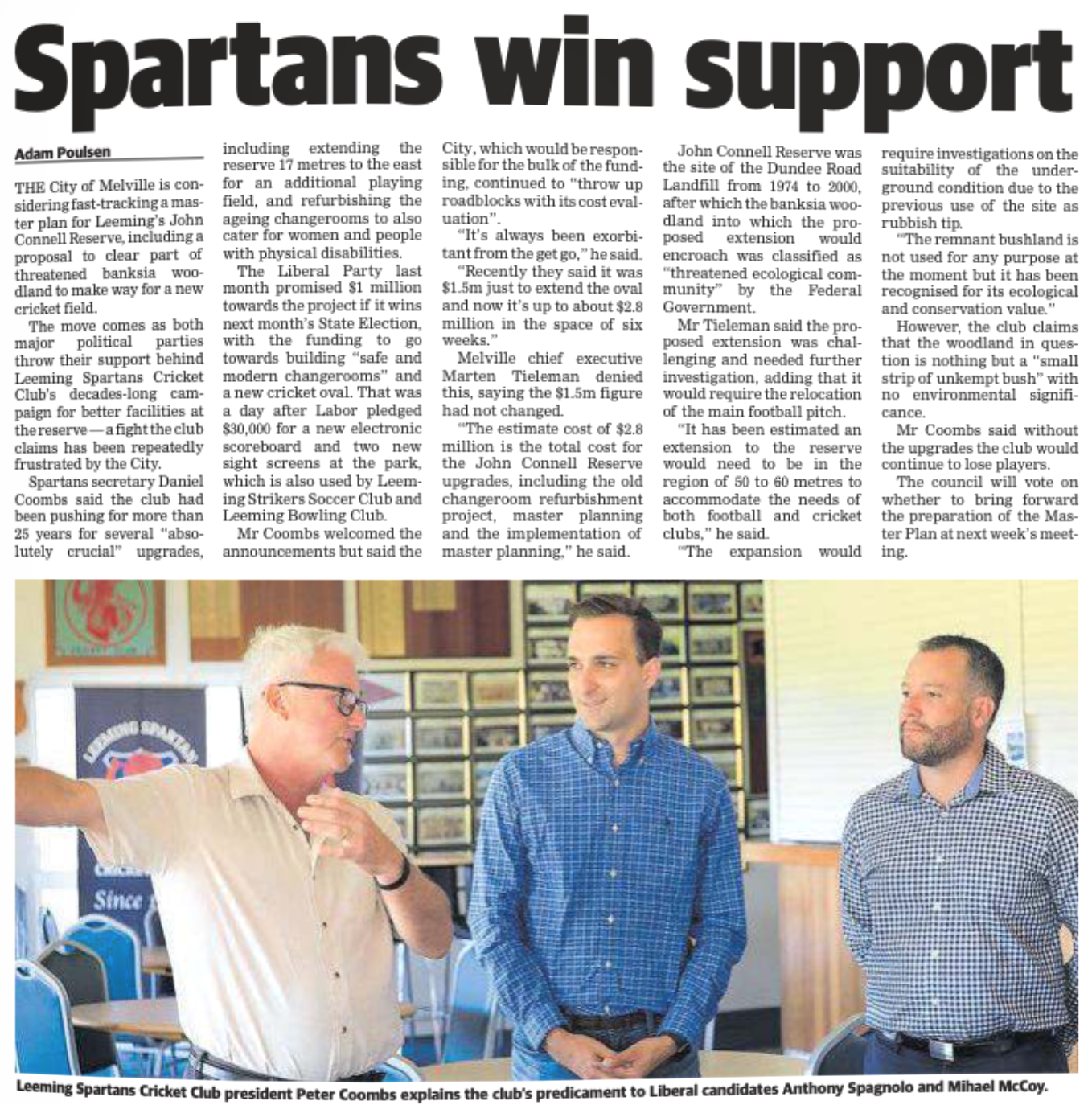 THE City of Melville is considering fast-tracking a master plan for Leeming’s John Connell Reserve, including a proposal to clear part of threatened banksia woodland to make way for a new cricket field.

The move comes as both major political parties throw their support behind the  Leeming Spartan Cricket Club’s decades-long campaign for better facilities at the reserve — a fight the club claims has been repeatedly frustrated by the City.

Spartan Secretary Daniel Coombs said the Club had been pushing for more than 25 years for several “absolutely crucial” upgrades, including extending the reserve 17 metres to the east for an additional playing field, and refurbishing the ageing changerooms to also cater for women and people with physical disabilities.

The Liberal Party last month promised $1 million towards the project if it wins next month’s State Election, with the funding to go towards building “safe and modern changerooms” and a new cricket oval. That was a day after Labor pledged $30,000 for a new electronic scoreboard and two new sight screens at the park, which is also used by Leeming Strikers Soccer Club and Leeming Bowling Club.

Mr Coombs welcomed the announcements but said the City, which would be responsible for the bulk of the funding, continued to “throw up roadblocks with its cost evaluation”.

“It’s always been exorbitant from the get go,” he said. “Recently they said it was $1.5m just to extend the oval and now it’s up to about $2.8 million in the space of six weeks.”

“The estimate cost of $2.8 million is the total cost for the John Connell Reserve upgrades, including the old changeroom refurbishment project, master planning and the implementation of master planning,” he said.

John Connell Reserve was the site of the Dundee Road Landfill from 1974 to 2000, after which the banksia woodland into which the proposed extension would encroach was classified as “threatened ecological community” by the Federal Government.

Mr Tieleman said the proposed extension was challenging and needed further investigation, adding that it would require the relocation of the main football pitch.

“It has been estimated an extension to the reserve would need to be in the region of 50 to 60 metres to accommodate the needs of both football and cricket clubs,” he said.

“The expansion would require investigations on the suitability of the underground condition due to the previous use of the site as rubbish tip.

“The remnant bushland is not used for any purpose at the moment but it has been recognised for its ecological and conservation value.”

However, the club claims that the woodland in question is nothing but a “small strip of unkempt bush” with no environmental significance.

Mr Coombs said without the upgrades the club would continue to lose players.

The council will vote on whether to bring forward the preparation of the Master Plan at next week’s meeting.

There are a few disappointing comments and inconsistencies from the City of Melville in relation to the works we are proposing to conduct here at John Connell Reserve, and these have been highlighted in the article.

It may appear that the figure of $1.5 million is the cost of the oval extension, however a cost breakdown received by the Leeming Spartan Cricket Club from the City, as well as an extract from the meeting that was held by the Council last Tuesday clearly shows that the figure – which was initially stated to be $1.5 million has now expanded out to $2.12 million. Attached below is an extract from the agenda for the meeting of ordinary council held last Tuesday in relation to (among other items) the John Connell Reserve Development Plan.

Disappointingly also, the above article was the first indication that the Leeming Spartan Cricket Club had received as to a Council Meeting being held in relation to the John Connell Reserve, and we were not notified of this at any stage. Having sat through the four-hour ordeal to the point where the agenda items were raised, it was further disappointing to see that only about five minutes worth of discussion was had regarding the issue (which will be posted on our website later today), and no substantive outcome was reached.

Future news articles will be released next week in The Melville Gazette focussing on our desperate needs for change rooms that properly cater for all Spartans. 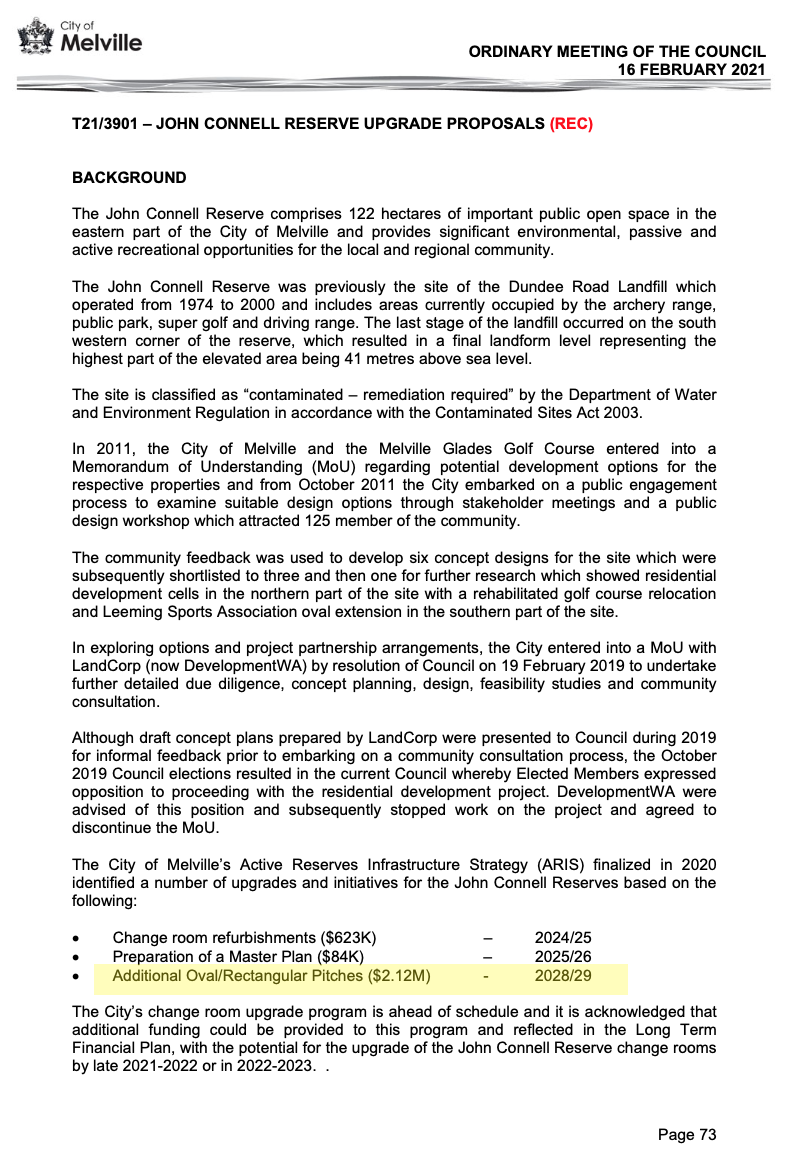