The Spartan Family invite all members, players, families, friends to John Connell Reserve on Sunday 1st November for a fun family day to support one of our own, 1st Grade Premiership Player, Rhys Jones.

On 25th July 2020, Rhys was playing AFL Football for his club, Canning Vale F.C. when he was involved in an on-field collision with an opponent. After scans in hospital, doctors described his injuries as though he had been in a serious car accident. Jonesy was left with a fractured kneecap and leg plus 3 snapped tendons.

As a result, Rhys will be off work for at least 12 months unable to support his young family. Unfortunately, health insurance payments haven’t commenced nor does he qualify for any Government Jobkeeper payments.

Rhys isn’t out of the woods yet, he is still to endure several operations over the next few months.

So because Rhys is a Spartan, our club committee have got together with Armadale Cricket Club, Canning Vale Football Club, Bullcreek-Leeming Football Club and Armadale Football Club to organise a family day at Spartan HQ with all proceeds going straight to Rhys and his family to help them get by.

The day will feature Two F15 Games during the day, featuring players from all clubs involved plus we will have activities for the kids including bouncy castles etc.

As always the bar and BBQ will be pumping all day long.

The day kicks off from 12pm. See you there! 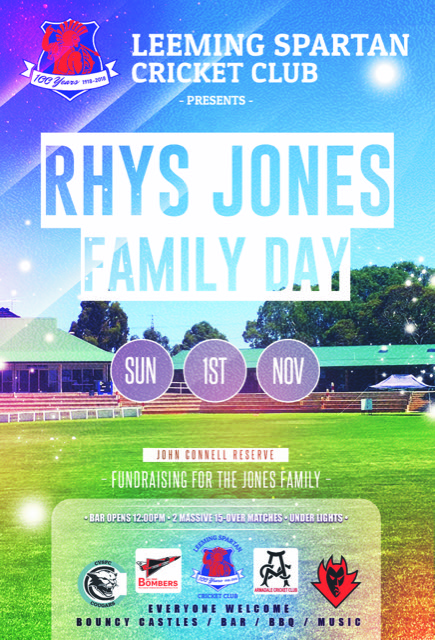