In our first ever attempt at the three-year-old Formula15 tournament, the Leeming Spartan Cricket Club has claimed the premiership with a classic victory over Phoenix last week.

The Spartans nominated for the competition for the first time, which sees teams play out fifteen overs each in the SMCA’s spin on the global behemoth that is Twenty20 cricket.

With four regular matches played every fortnight on a Tuesday afternoon, the Spartans went undefeated to finish on top of the ladder before coming up victorious in the final, gifting us our first premiership since 2015/16’s Fifth Grade triumph.

Not even a mix up with the location of the final could deter the Spartans, as despite finishing on top of the standard and association-accepted MyCricket ladder, we were deemed to have finished in second place and had to ‘travel’ away to Phoenix due to net run rate.

Nevertheless, we came and conquered, winning the toss and electing to bat – which interestingly was the first time Phoenix hadn’t batted first in this year’s competition.

We got off to a lighting start as Glen Parise and Ben Harris added 39 for the opening wicket, as a small crowd began to gather on the Phoenix patio.

After Parise was caught on the boundary, the mainstay of the innings, Kodie McKrill, got to work, as he made a (by comparison of what was to come) well compiled 42 to top score.

After Harris was dismissed for 32, Todd Gill (who made his second ton for the Club last Saturday) entered the arena and smashed some monster sixes to race to 37 from 18 deliveries, helping the score to 128 before he was caught off a mistimed shot down the ground.

Things began to stall as Josh Foster and Captain Paul Kalleske were dismissed for first ballers, leaving us in a somewhat tricky position at 5/128 (having been 2/128 just three balls earlier – Gill out on the last ball of the 12th over and the others dismissed on the first two of the 13th), but McKrill continued his fine work up the other end, hitting some late boundaries to see us to a mightily competitive 6/142 from our fifteen overs. 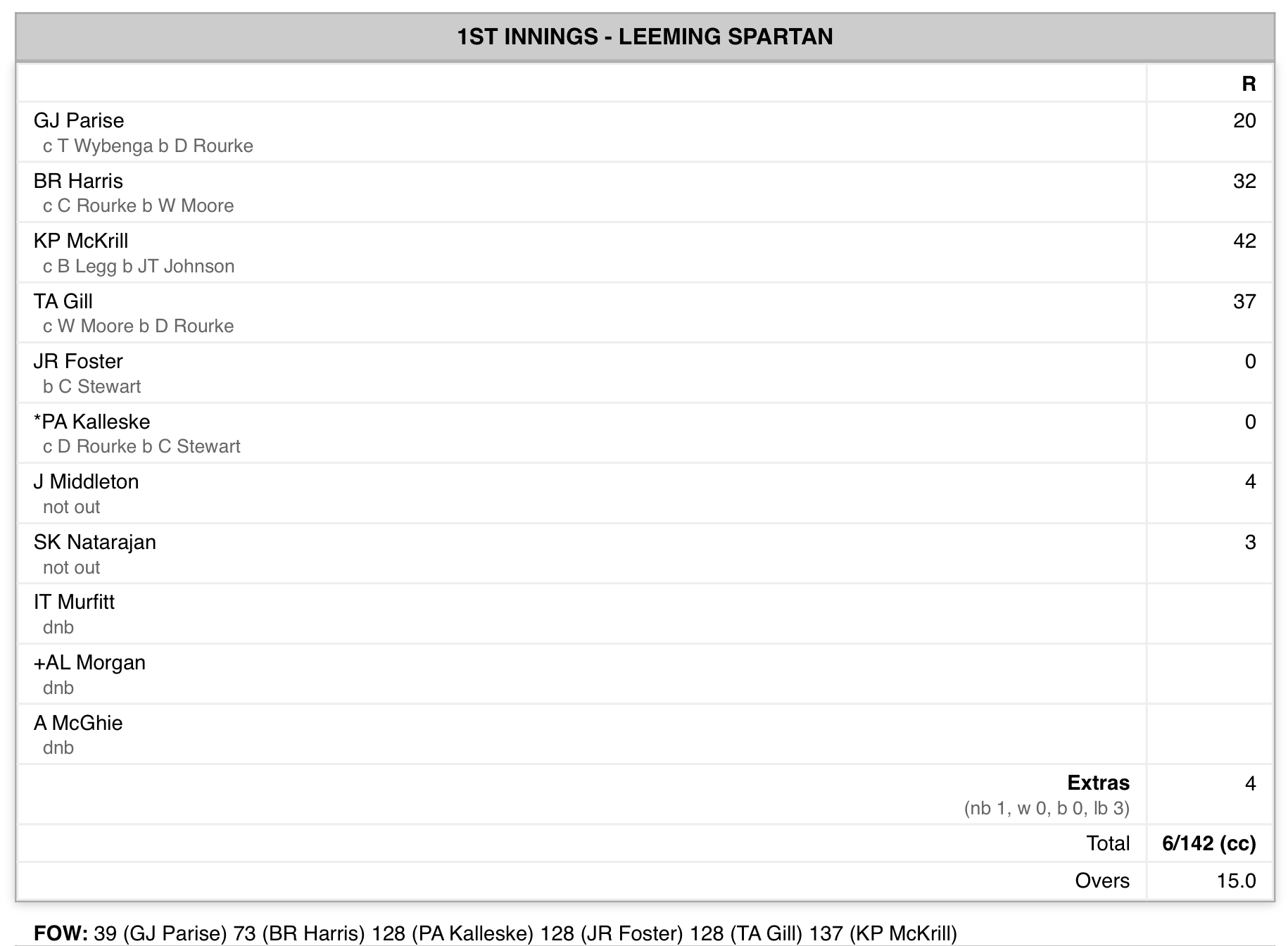 In reply, Phoenix got off to the worst possible start as Harris claimed a wicket on the first ball of their innings, and they never really got going for the first nine overs, with wickets falling at regular intervals and no partnership really able to take hold.

Some late order hitting from Pheonix’s perennial Rourke siblings got them very much back into the contest, Junior top scoring for the match with a fine 51, but it ultimately proved in vain as the Spartans won by sixteen runs – handing Phoenix their first loss of the season in the process, and just their second in two years.

Kodie capped off a fine all round performance by leading the bowling figures with 3/24 from his allotted maximum of three overs, earning the Man of the Match award for his efforts.

Overall it was a fantastic day and tournament, and allowed some great bonding between Spartans as the side was comprised of players from First Grade to our One Day ‘G’s, and to the sixteen blokes who represented the side over the course of the season, the Leeming Spartan Cricket Club congratulates and thanks you immensely!

While only eleven could take to the field in the final on the day, all sixteen certainly played their part during the season. There are many difficulties in organising players for a fifteen over match on a Tuesday afternoon (with a 5:00pm start time), and not once did we ever struggle to do so as guys jumped on board with both hands.

This premiership is a testament to all who donated their time to help the Club out in our 99th season, and is a fitting end to a fine season. Go Spartans! 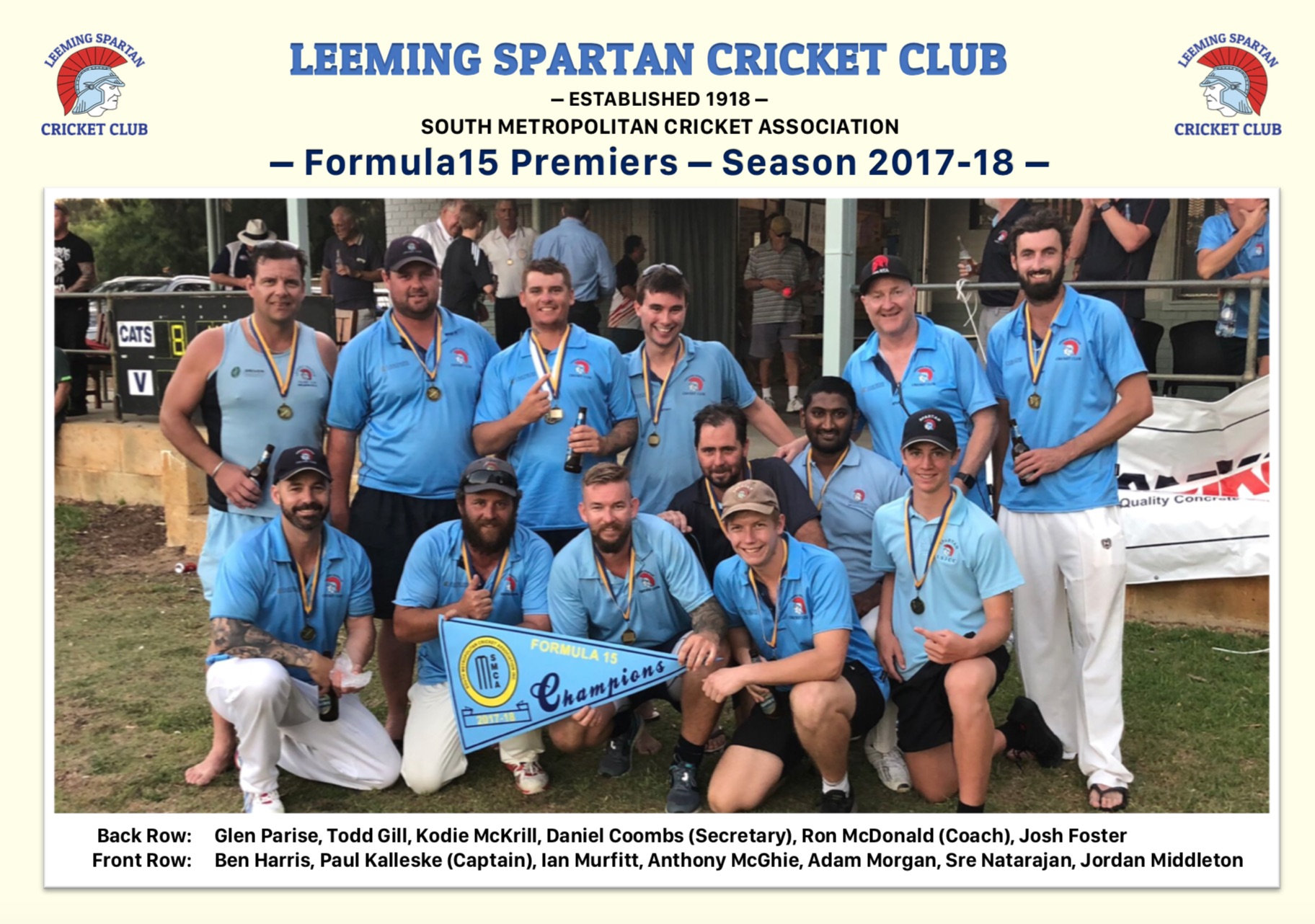